The Value of Keeping Up With the News 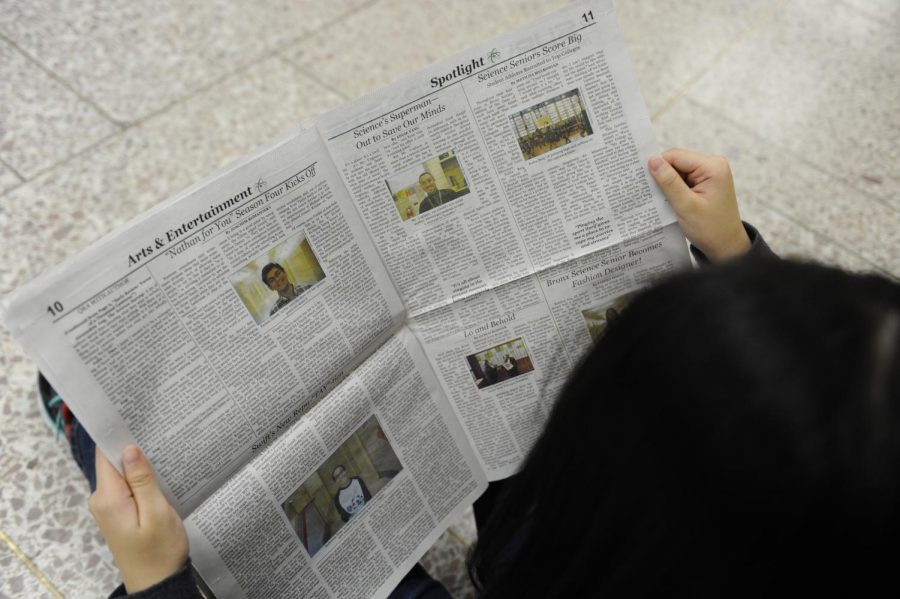 Joyce Lin '19 keeps up with the events going around in Bronx Science by reading the school's paper regularly.

Consuming the news is exactly like consuming food— there’s the good and the bad, and there’s something every day. Politicians, celebrities, and even ordinary citizens are making the news continually, with events transpiring not only at a local level, but also on a national and global scale. These events reach the ears of millions, including Bronx Science students. Students may react in one of two ways; they may either do something about what is going on, or they may ignore it.

Many people feel the need to keep up with the latest trend or issue. The habit surfaces due to various factors. One of the most common factor is Facebook; students are often scrolling through Facebook, feeding off of the news of both fellow students and subscribed pages. Others may simply like keeping up with politics, subsequently consistently reading the newspaper and political magazines, and downloading news apps on their phone. Joyce Lin ’19, an avid reader of the news from CNN, said, “I keep up with the news, because it’s important to me to be kept updated about current political matters.” Other students read the newspaper because they do not want to seem ignorant.

While people read for a variety of reasons, the majority of news readers read the news simply to learn about what is going on in the world and if there could be any significant changes in their lives. The recent issue regarding net neutrality is a prime example. Whether people read the news or not, there are certain instances when the majority of the student body are kept up to date with such issues because it raises large concerns regarding their usage of day-to-day tools. Students can access information, for it is more readily available than ever. People more readily consume the news; with the internet, everyone has access to information, quite literally, the moment that any event occurs.

The variation of news that circulates the internet and news outlets range from informational articles to magazine-based health articles, from sports to celebrity deaths. While not all news is exactly “beneficial” or “necessary” (i.e. rumours or degrading commentary), knowledge about world affairs are important in allowing people, as individuals, understand the next steps that politicians are taking. Hillary Fu ’19 said, “I don’t often keep up with the news, but if it’s important enough, such as the recent issue with net neutrality, I will do something about it.” Knowing what politicians are thinking, and what they are saying, is important because people have the power to make a change only if they understand the underlying situation. People can act accordingly to the changing world. Whether it is a protest or the submission of a petition, the voice of people are better heard and better understood when the receiver understands all sides of the situation.

However, many students, do not read the news regularly. Politics bore them, and it does not seem directly relevant to their lives. They are doing fine without having ever picked up a newspaper, so why bother with information that they will forget in a couple of hours or minutes? Rather than the “boring, political” news that surfaces, “Top Stories,” the more entertaining news that circulates social media outlets catches their attention much more quickly. Nevertheless, even when it seems to be lacking anything interesting, it is important to explore the world in the political realm. The events that seem to be so uninteresting and lacking in relevance will make an impact on both a local and global scale towards students’ daily lives.
“I don’t often keep up with the news, but if it’s important enough, such as the recent issue with net neutrality, I will do something about it.”
Our students’ very own school newspaper, The Science Survey, is your first step in keeping up-to-date with the events going on. It includes both events that are transpiring in school, while also addressing issues that are going on nationally. No matter where the event occurs, however, it can affect everyone in some way or the other. Every student has a reaction, or may be connected, with what’s happening in school and in the world at large.