The Importance of Effective Whistleblowers in an Age of “Fake” News 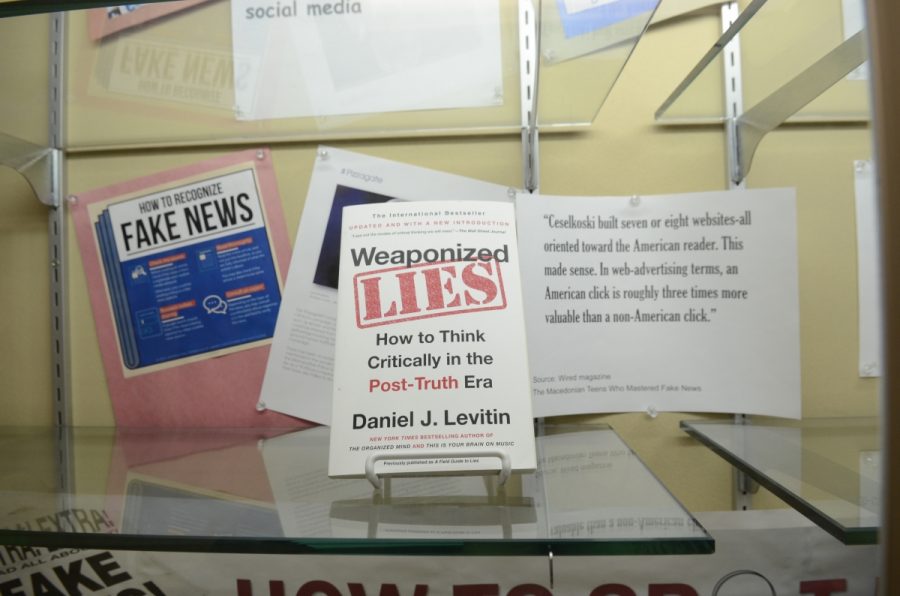 A book in the "Fake News" display in front of the Bronx Science school library.

Whether it’s exposing the underground rape culture in universities, U.S. military strategies in the Iraq War, or financial corruption in a large energy company, whistleblowers make information accessible to the public and exercise America’s fundamental right to free speech and free press. Protected by the Whistleblower Protection Act, a law Congress passed in 1989, and reinforced by the No FEAR Act in 2002, which addressed discrimination in the workplace, whistleblowing continues to play an important role in bringing justice to society.

Unlike muckraking, whistleblowing is the act of publicizing of wrongdoings of both private and public organizations from an internal source. The etymological origin of the word directly implies a person who alerts people of something. In the business and political world, this is usually an employee who disapproves of how people are being treated in an organization and its lack of engagement.

There have been numerous cases in the past that examine the crucial role that whistleblowers play in raising awareness about issues and addressing them with solutions. One prominent example of effective whistleblowing is the airing of documentaries that expose the rape culture in American colleges and universities. “Hunting Ground” is a 2015 documentary that exposed  retaliation and harassment, which victims of college campus rape faced when they attempt to fight for justice. The documentary was especially effective because it covered large, well respected universities, such as Harvard Law, Florida State University, the University of North Carolina at Chapel Hill, and Notre Dame, among others.

Although it received backlash and criticism from college professors and other individuals, the documentary effectively communicated that campus rape is a widespread problem, and that victims are discouraged from reporting it because of their university’s lack of action. The impending denial of the sexual assault epidemic occurring on college campus is unacceptable, but it continues on because of the strong dismissal of victims since campus rape threatens the reputation of colleges and universities. In order to end the denial of truth, there must exist a greater incentive to have these voices heard; effective whistleblowing must not just be allowed, but encouraged.

Whistleblowers are especially relevant in today’s political climate and media, though they are often plagued with overwhelming controversy. Currently, as President Trump wages war on leaks against national security, events are reminiscent of former U.S. Army soldier Chelsea Manning’s leaking of diplomatic and military files to WikiLeaks in 2011. WikiLeaks is an international non-profit whistleblowing organization that publishes classified information and leaks from anonymous sources. It was founded in 2006 by Julian Assange, an Australian internet activist, and continues to release classified government documents online for universal access.

After Manning’s leak, the Obama administration established a threat task force to address emergencies like the leak. Manning was sentenced to thirty-five years in prison but was commuted to seven years by former President Obama. In the American public eye, many viewed her as a hero for being an antiwar and government transparency advocate.

In truth, whistleblowing is risky business. Congress passed the Espionage Act in 1917 in order to prevent military faults as a result of leaks during World War I and times to come. However, such leaks—which the American government decried as traitorous acts, and dangerous to Americans—were also done in the name of the preservation of the principles of democracy and government transparency that is extremely important to maintaining trust in the government. Changing times, context, and motivations should all be considered when deciding the necessity of leakers such as Manning and WikiLeaks.

Manning’s leaked documents, for example, showed the realities of American military tactics during the Iraq and Afghanistan Wars, much of which angered civilians. One video, in particular, was extremely alarming as it exposed American helicopters opening fire on innocent journalists in Baghdad without confirmation of life-threatening danger. To an extent, the public’s enragement could be comparable to the government’s initial outrage on the leakage.

Furthermore, whistleblowing directly relates to the accurate communication of news. It’s no doubt that we are currently living in an era of “fake news.” Although partisan news in America have existed for more than two centuries, thanks to cheap newsprint, television, and online accessibility, the events of the past year and election have especially instigated an outbreak of flatly false, exaggerated, or overly-partisan news all over the internet.
Whistleblowing needs to be done truthfully, with impartiality and integrity, in order to effectively expose corruption and inspire reform.
With President Trump’s perpetual criticism of American media, he pits news companies against each other, making it difficult to distinguish what is it true from what is not. Batya Weiner ’18, President of Bronx Science’s Current Events Forum, raised an interesting point as to why the media revolution might be taking place now. “It is extremely easy to disseminate it under the impression that is indeed factual with the social media revolution,” Weiner said. The spread of fake news is commonly credited to Facebook, Twitter, and other popular social media agencies, thus engaging a larger audience than what news agencies might have expected.

Most importantly, fake news stimulates political partisanship. In a research paper by Hunt Allcott and Matthew Gentzkow in Stanford’s ‘Journal of Economic Perspectives,’ entitled ‘Social Media and Fake News in the 2016 Election,’ the authors found that “fake news was both widely shared and heavily tilted in favor of Donald Trump. Our database contains 115 pro-Trump fake stories that were shared on Facebook a total of thirty million times, and forty-one pro-Clinton fake stories shared a total of 7.6 million times.”

“We can combat fake news by paying close attention to the sources from which we receive our information and by making sure that they are credible sources such as The New York Times, The Washington Post, and The Wall Street Journal, among others,” Weiner ’18 said. Although paying attention to the credibility of our news sources is crucial to obtaining and circulating accurate news, there must also be an incentive to blow whistles and expose those fake news agencies.

Phillips was found to be linked to Project Veritas, an organization aimed at publishing videos and information in order to expose its targets, mainly the mainstream news media and left-leaning groups. It was founded by conservative political activist James O’Keefe, who has previously been convicted of multiple misdemeanors and has declined to answer any questions about Phillips. It began as a whistleblowing agency itself, aimed at exposing corruption and misconduct, but clearly missed the mark and instead defines a perfect example for ineffective whistleblowing.

Furthermore, it is easy to misconceive the importance of whistleblowing. Recently, Twitter messages from 2016 have been uncovered between Donald Trump Jr. and WikiLeaks. Following the news exposure, Donald Trump Jr. posted the brief chain of messages. To sum it up, the exchanged messages included controversial topics such as anti-Trump organizations, Trump’s tax returns, and Hillary Clinton’s comments on Assange, the founder of WikiLeaks.

Although Trump Jr. only responded with three messages and barely addressed WikiLeaks, the news of their communication, in context of the 2016 presidential campaigns, caused many to doubt the intentions of the large whistleblowing agency. Yet, throughout the messages, WikiLeaks has made it clear that their objective in messaging Trump Jr. was to improve their own perceived impartiality.

Therefore, despite the controversy, the ultimate goals of whistleblowers like WikiLeaks, Chelsea Manning, and the producers of the ‘Hunting Ground’ documentary were to increase the fluidity of otherwise private information to expose misconduct. The released information is simply statistics or primary documents open to the public’s interpretation. Just because WikiLeaks bypassed its audience’s expectation of neutrality to obtain information doesn’t indicate that they violated their promise to the American public to offer a wider insight on the country’s public and private institutions.

As noted by the deputy managing editor of The New York Times, Matt Purdy, it is important to notice the difference between published information that directly places American lives in danger, and published information that makes the American government uncomfortable. Americans should focus on accrediting whistleblowing with increased transparency and fluidity, because these qualities are imperative to the initial stages of revelations.

Moreover, recognizing the importance of speaking up isn’t enough to combat the surge of fake news and politically biased media. Whistleblowing needs to be done truthfully, with impartiality and integrity, in order to effectively expose corruption and inspire reform.