Trump Versus the World at the UN General Assembly 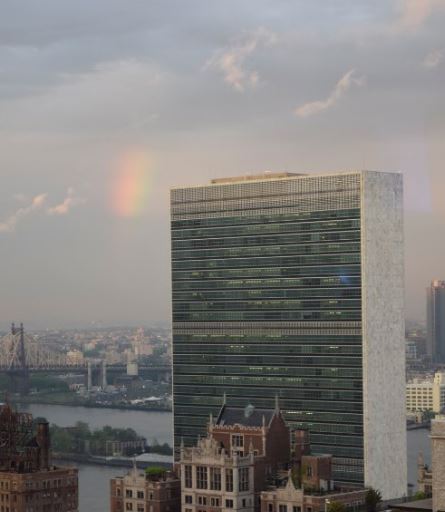 The United Nations Headquarters is located in Midtown Manhattan, near the East River.

For a full week at the end of every September, government leaders from all around the world gather in New York City to discuss world issues at the UN General Assembly. This year’s agenda included the genocide in Myanmar, terrorism, and North Korea’s nuclear program. With President Donald Trump attending as a representative of the United States government for the first time, this year’s Assembly made headlines on a near-daily basis.

The most common headlines involved threats and insults flying between the United States and North Korea. President Trump, in speeches and in tweets, mocked and threatened Kim Jong-un, the leader of North Korea, calling him names like “Rocket-Man,” and threatening total destruction. North Korea responded by stating that Trump was on a “suicide mission” and threatening to test a hydrogen bomb in the near future.

After Trump recommended toughening the nuclear deal with Iran, Iran announced that it had tested a new ballistic missile and vowed to continue expanding its arsenal. The Iran nuclear deal, signed in January of 2016, eased economic sanctions on Iran, which was suspected of being in the process of creating a nuclear bomb, in exchange for a decrease in the number of nuclear centrifuges. President Trump, an outspoken critic of the deal, has been hostile towards Iran, a position that could become detrimental now that he is in a position of governmental power. The reimposition of sanctions on Iran could lead to war.

With Trump’s unpredictability, many are concerned about the possibility of another war.

“Trump’s speech was too dismissive of the possibility of war. His words are inappropriate; he does not speak seriously about a very serious topic. War is quite literally a life-or-death matter. Trump is trying to sound tough when there is no need to, since the United States has one of the largest militaries in the world,” said Dr. Davis.

Many world leaders share this concern and have signed a nuclear ban treaty in effort to minimize the chances of nuclear war. However, many of the countries with nuclear weapons oppose this treaty, claiming that the existence of nuclear weapons help to deter conventional war.
“The United Nations is bigger than any American president’s personality.”
Leaders of countries such as France and Canada, who usually side with the United States, were critical of Trump’s positions on global issues, particularly in his desire to withdraw from the Paris Climate Accord. Now that Nicaragua and Syria have signed the Accord, the United States is the only country to oppose it.

“Trump’s behavior is dangerous and fueled by a cheap demagogic agenda. His threats to other countries are unnecessary and counterproductive,” said Dr. Davis.

Mr. Frederic Schorr, an A.P. and Regents U.S. History teacher, believes that, as much as Trump seemed to dominate headlines, the United Nations did accomplish many goals as an international coalition, including the U.N. Security Council’s unanimous support of the impositions of new sanctions on North Korea.

“The United Nations is bigger than any American president’s personality,” Mr. Schorr said.