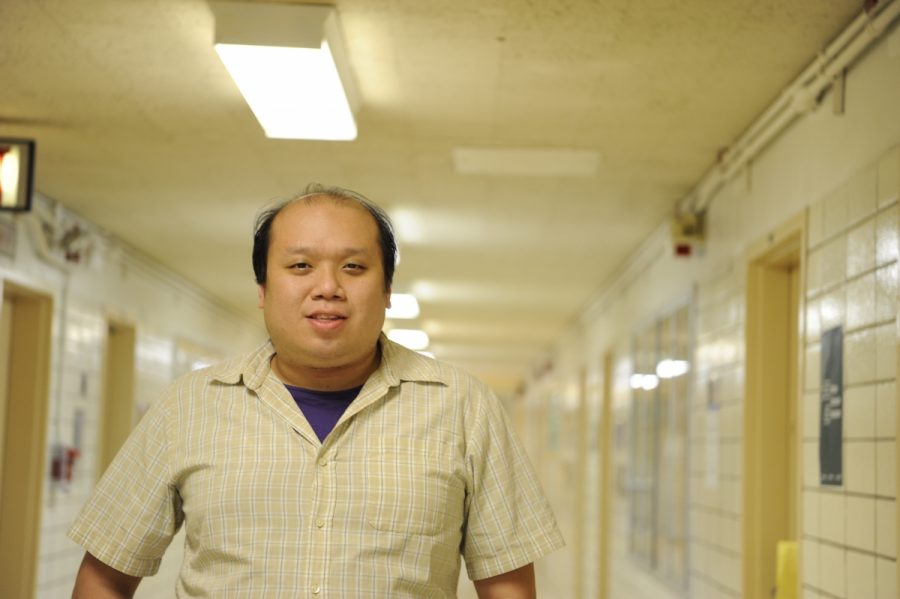 Mr. Cheung, a geometry teacher at Bronx Science, and the winner of the 2011 Pi Day pie eating contest.

The cafeteria was full of excited students, teachers, and many pies. Everyone was full of anticipation for the minute hand of the clock to land on fourteen.

It was the first ever Pi Day celebration at Bronx Science. In 2011, the Mathematics Department organized a Pi Day event. The festivities began at 3:14 PM on March 14th in the cafeteria. Students attempted to accurately recite as many digits of pi as they could, and entered pies in a bake-off judged by teachers. A pie-eating contest was held afterwards. Different teachers in the department were to finish a pie and whoever managed to do so in the shortest amount of time was the victor. There was also an Albert Einstein look-alike contest (as March 14th also happens to be Einstein’s birthday). Furthermore, Mr. Perna, a Bronx Science mathematics teacher, along with several other students, picked numbers out of a hat and did the respective amount of push ups. Collectively, 314 push ups were done (in order to burn off all of that pie, of course).

Mr. Cheung, another Bronx Science mathematics teacher and the winner of the 2011 pie eating contest, was able to recall a few of the festivities from the Pi Day celebrations. “I remember the pie that we had the year that I won. It was a Boston creme pie. It was intense eating about seven to eight slices, or an entire pie, all at once,” he said.

Ms. Karavitis, a Geometry and AP Statistics teacher, also experienced the Pi Day celebrations in 2011, 2012, and 2014. “I felt honored to be a pie taster. I think the students and teachers enjoyed it a lot,” she said. When asked if the Mathematics Department had any plans regarding Pi Day 2018, she stated, “it’s still too far away to say.”

Evidently, the Pi Day celebrations were a huge success. Since Pi Day will fall on a school day in 2018, it should be brought back. The pie eating contest would not only be an enjoyable way to relieve stress, but it could also serve as a fundraising event. Local bakeries could be asked to donate pies for the contest. Depending on the number of pies acquired, the contest would either be to see which teacher or faculty member can finish a pie the fastest or how many pies they can eat within a given amount of time. Any leftover pies could be sliced and sold to students. Students could be asked to make a donation of their choice to attend the event. All of the proceeds could go to a charity of the student body’s choosing. They could be able to vote via Google Forms prior to the event.

Of the 200 students who responded to a December 2017 poll asking whether or not they thought the pie eating contest should return, 94% voted for the event to make a comeback.
“I felt honored to be a pie taster. I think the students and teachers enjoyed it a lot.”
The student body has spoken. Your move, Mathematics Department.