A Blast From the Past

The rise of hate groups and the possibility of nuclear warfare once again emerge. 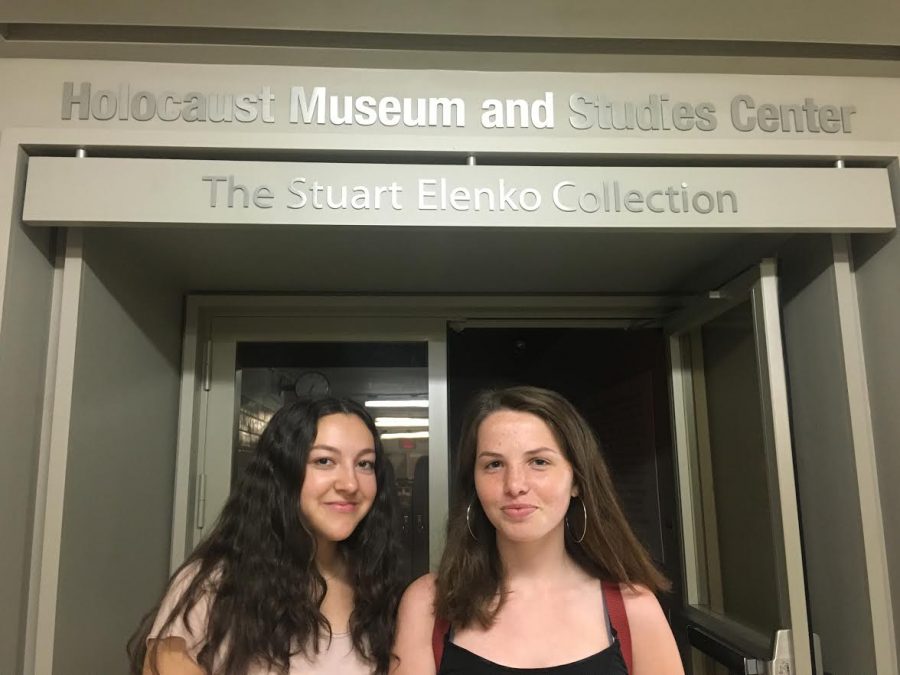 Julia Haberfield ’19 (left) and Mary Tyrrell ’19 (right) in front of the Holocaust Museum and Studies Center, on the way to their Holocaust Leadership class.

“Those who do not remember the past are condemned to repeat it” – George Santayana.

In the months following Donald J. Trump’s presidential election, the last seven decades of world history have decided to play themselves out again on U.S. soil. We are once again experiencing threats last seen during World War II, with the fear of white supremacists surfacing and festering throughout the country. At the same time we are enduring what could possibly turn into another Cold War, this time with North Korea, as tensions run high and threats escalate.

History has been known to repeat itself as tyrants are overthrown by rebellions, as stock markets fluctuate, and as petty wars rage on; but never before have we seen history repeat itself all at the same time, same place, and under the same president.The current administration seems to have forgotten the seven decades of progress following WWII and the Cold War, the concept of learning from one’s mistakes.

On August 12th 2017, the Charlottesville protests revealed the return of unabashed white supremacy in the United States. What started off as a “Unite the Right” protest soon grew into the largest white supremacist event in recent U.S. history. The event left one dead and three dozen injured after a speeding car rammed into anti-racist protesters at the scene and violence erupted between ‘Antifa’ (Anti-Fascists) and Alt-Right protesters.

When asked what she thought of the recent revelation of organized white supremacist groups in the United States, Mary Tyrrell ’19, a student in the Holocaust Leadership class stated, “It’s very concerning. Given that I am enrolled in a class that studies everything that happened during the Nazi regime, as well as examines consistent anti-semitism throughout history, we think of what happened as an idea of the past, but recent events reveal that it’s actually a continuing problem.”

After the incident, President Trump addressed the violence by announcing that he condemned “in the strongest possible terms this egregious display of hatred, bigotry and violence on many sides.” Many saw this statement as Trump’s unwillingness to call white nationalists out by name. Nazis, alt-right, and white supremacists, on the other hand, were emboldened and encouraged by Trump’s speech, which they saw as approval from the president.

Despite being called out, Nazi groups continue to dodge any blame for the divisive state of the country and an increasing amount of alt-right and white supremacists groups publicly surface every day as they feel protected by the Trump administration.

Julia Haberfield ’19 commented, “It’s all very scary, especially given that I’m Jewish myself, yet so much has progressed that I would like to believe, and hope, that there could never be another Holocaust as we saw during World War II.”

Just as Nazism has resurfaced, so has the fear of nuclear war, a phenomenon last seen during the Cold War between the U.S. and the Soviet Union from 1947 to 1991. The Cold War, which many view as a struggle for power between the Soviet Union and the United States, has made its debut again. This time it is a rivalry between North Korea and the United States, as both President Trump and Prime Minister Kim Jong-un hurl insults at each other; the fear of a warmongering tweet starting a nuclear war is actively hanging over citizens’ heads.

Last month, Trump warned Prime Minister Kim Jong-un that if North Korea continued with its threat to destabilize the Korean Peninsula and East Asia, that it would feel the “fire and fury” of the United States. Kim responded with new threats and a new round of nuclear weapon testing, including the launching of a nuclear missile over Japan.
During the Cold War, the United States President Richard Nixon and the Soviet Union General Secretary Leonid Brezhnev realized the power that nuclear weapons held.
Then, in response to Trump’s U.N speech in which he proceeded to call Kim “Rocket Man” and threatened to “totally destroy North Korea,” Foreign Minister Ri Yong Ho came to his leader’s defense by calling Trump “a mentally deranged person full of megalomania” who holds “the nuclear button” and makes “our rocket’s visit to the entire U.S. mainland inevitable.”  Ho continued and made clear that if any innocent U.S. lives were lost because of “this suicide attack,” Trump was to be held completely responsible.

Name calling and nickname-giving is seen to be a great past-time of Trump as he has also given nicknames to the other presidential candidates during election season. “Little Marco,” “Lyin’ Ted,” and “Crooked Hillary” are only a few examples of the derogatory language Trump used when addressing his competitors, and none of them held nuclear weapons in their pockets.

During the Cold War, the United States President Richard Nixon and the Soviet Union General Secretary Leonid Brezhnev realized the power that nuclear weapons held. Nixon and Brezhnev realized that, with the amount of nuclear power each country held, mutually assured destruction (MAD) for either country was inevitable if a full-blown nuclear war was to commence.

With this concept of MAD, Nixon and Brezhnev created the Strategic Arms Limitation Treaty (SALT), in which both the United States and the Soviet Union promised to dismantle their nuclear arms in order to ease tension between the two countries. It is unknown if Trump knows about the concept of MAD, or if he simply chooses to ignore it; but there is no doubt that North Korea will eventually create missiles capable of reaching the United States mainland. This puts the possibility of a nuclear war completely in President Donald Trump’s hands – or may I say tweets.