The Deal With Drones 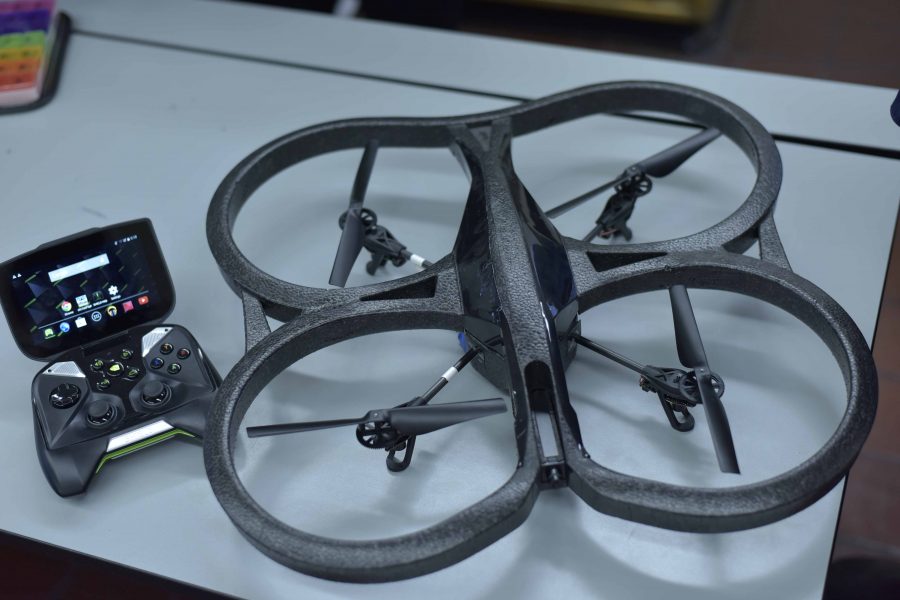 Bronx Science students have access to quadcopters, a type of drone, for some of their assignments in engineering and math.

A breathtaking view of a herd of zebras prancing across the African savanna. A criminal, located in mere minutes after he has committed a crime, thanks to watchful eyes in the sky. A family, saved by a bundle of emergency supplies, dropped in on demand. These are just some of the things that unmanned aerial vehicles (UAVs), or drones, have become capable of. However, it is true that, while drones can be beneficial to society, the extent of what drones are capable of has become the cause of much consternation among the American public and the world.

While the word “drone” was most often used to refer to the extremely high tech machines employed by militaries for the observation of areas of interest and airstrikes, the recent ubiquity of cheap, fixed rotor UAVs available for civilian applications have given “drone” a new meaning. Drones equipped with cameras can be purchased for less than one hundred dollars, and can be seen frequently flying on college campuses, parks, and fields.

The increasing availability of drones has encouraged numerous forms of their implementation in daily life, outside of personal amusement. Police agencies around the world have begun to use drones for surveillance, and commercial organizations such as Amazon have begun to test the use of drones to deliver lightweight goods swiftly to customers. Counties in Japan have also initiated trials of shipping supplies by drones to disaster relief areas. Other potential methods of the employment of drones include geographical mapping of an area’s contours, monitoring of farmland, aerial footage and photography, as well as search and rescue missions.

Drones are undoubtedly useful, and some students have positive impressions. “I think drones are beneficial because they can perform various tasks that humans can’t do, along with their small size. I don’t think they can harm people as much as they can help people,” Rajiv Ramroop, ’18 said.

However, for the same reason that they possess so much prospective benefit, drones possess a host of problems. As airborne vehicles, drones are at risk of colliding with other airborne crafts, such as airplanes and helicopters, endangering both pilots and passengers. Additionally, there have been several incidents where drones abruptly fell out of the sky, with their weight being more than enough to inflict serious injury. The same drones that could save a village cut off by land by carrying supplies could also carry illegal items such as firearms and drugs. Drones can, and have, flown into restricted areas. One such incident occurred where a drone was discovered on the roof of the Japanese Prime Minister’s office. The matter of privacy is also a serious concern, as drones lend themselves to spying and other illicit activities.

Dr. Robert Muratore, a Physical Science at Bronx Science, said, “I think it depends on the specific circumstances, and like any technology there has to be a balance of risk-benefit. Generally I think that drones can yield a positive outcome.” Dr. Muratore is also a professor at Cornell University, with multiple patents to his name.

Bronx Science has a highly advanced and dedicated engineering curriculum, tools, and faculty. The possibility of drones becoming part of the school’s curriculum is not out of the question. Carefully controlled, drones could be an excellent way of introducing students to working with more sophisticated technologies. In fact, some of our students already dabble in drone technology. “My understanding is that the Mathematics department has one that they’re using and that we’re also working on some of that drone technology in the digital engineering course. So we’re already doing it, on a small scale,” Dr. Muratore said.
“I think it depends on the specific circumstances, and like any technology there has to be a balance of risk-benefit.”
It is clear that the possibilities and applications of drones are growing every day. However, without proper regulations, rather than guidelines, it would be all too easy for drones to become more of a danger than an asset to society.