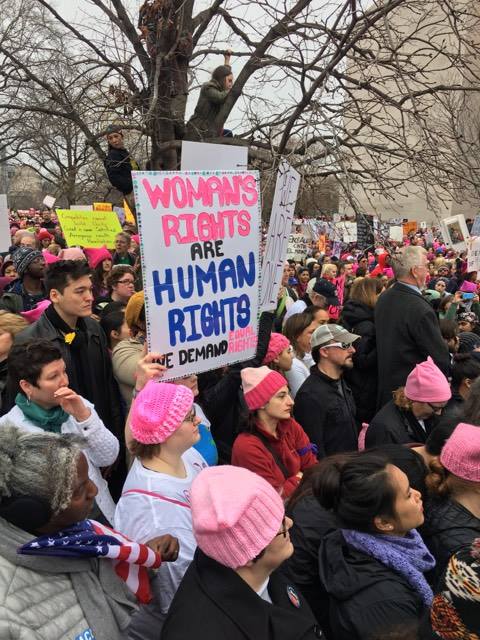 Protestors rally together during the Women's March on Washington.

On January 21st, 2017, over four million Americans mobilized for the Women’s March, making it the largest protest in modern United States history.

Crowd scientists estimated that the Women’s March on Washington had three times more people than President Donald Trump’s inauguration held a day earlier. The 2016 election cycle was one of the most divisive in American history. Many people living in the U.S. felt marginalized by Trump’s alienating rhetoric throughout his campaign, including his proposals to deport millions of undocumented immigrants, to ban Muslims from entering the U.S., along with his numerous misogynistic comments.

Many Americans struggled to find a way to express their opinions constructively and powerfully in a non-violent manner.
In response, a group of female national organizers, civil rights and political advocates, and CEOs organized a grassroots movement, the ‘Women’s March on Washington,’ to be held the day after Trump’s inauguration.

The group of women who organized the march made it clear that their goal was not to protest Trump’s inauguration, but rather to protest the hateful and sexist rhetoric that he has promoted. Their aim was to unite advocates for women’s rights from all backgrounds to show the American government and the world that “women’s rights are human rights,” as Trump’s opponent, Hillary Clinton, famously said.

“I decided to attend the Women’s March because I felt helpless and completely infuriated after Trump was elected,” said Maya Osman-Krinsky ’17.

Osman-Krinsky joined more than 500,000 fellow protesters on the National Mall in Washington D.C. Sister marches were also held in cities and towns across America and around the world.
Although the march was labeled a ‘Women’s March,’ the organizers encouraged an intersectional mission and vision inclusive of people of all genders. Allies of women’s rights and gender equality were also highly encouraged to attend the march.

“I originally wasn’t going to go to Women’s March, because I thought that it made sense for the Women’s March to be a female dominated space,” Adam Yoo ’17 acknowledged. “However, I went because I think it’s important for allies to back up women and to show their support.” Yoo participated in the New York City sister march along with more than 400,000 protesters.

Margalit Katz ’17, Co-President of the Bronx Science chapter of the National Organization of Women, also attended the Women’s March on Washington. “This march was a statement that as women, we will not stand for the infringement of our rights, despite a Trump presidency,” she said. “The march was not only constructive but also cathartic for women who feel that they have lost their voice in our society and do not have a means to express their concerns.”

Maya Shah ’17 felt a sense of solidarity while marching in Washington D.C.“It was kind of beautiful knowing that everywhere all around me and all around the entire world, there were people who felt the same way as me, walking for the same goal,” she noted.

On the other hand, there was a noticeable lack of diversity at the Women’s March on Washington. “I was saddened to see that women of color were not as well represented as they could have been. This should not have been a white women’s march, considering the majority of white women did vote for Trump. We should be working harder as a society to lift women of color up by showing up for them and always listening to their voices,” noted Kaya Scheman ’17, who attended the March on Washington.

Zoe Posner ’17, a founder of the Women in Debate program, asserted that “protesting alone is not enough to change this rhetoric – protests are only effective when combined with other concrete actions. However, the protest is less about which actions are sufficient, and more about building solidarity within the women’s liberation movement and broadening visibility of gender inequality.”

Since the Women’s March was held, protests have erupted throughout the United States. On January 29th, 2017, thousands of New Yorkers protested President Trump’s temporary travel ban on seven Muslim majority countries from entering the United States. Protesters continue to stand staunchly in the nation’s capital, and in cities across the country, fighting for equality on all fronts.