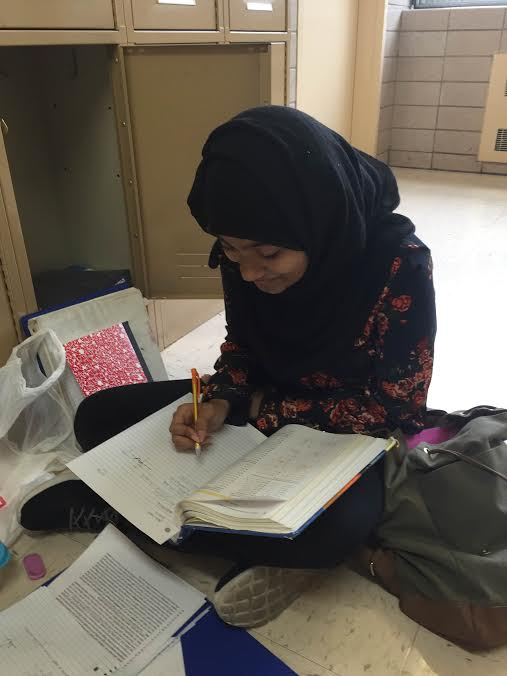 Fabliha Hussain '17, guided by her faith, feels strongly in both non-violence in addressing grievances and preventing excessive uses of force.

Ferguson. Chicago. Milwaukee. Sanford. These are cities in America that have been defined by police brutality and acts of violence against members of the African-American community that have been apprehended by police. This is a sensitive topic, no doubt, but one that needs to be addressed.

These reactions are not the result of just random instances; rather, they are a result of institutionalized racism, and a negative perception of African-Americans by law enforcement. The same attitude continues to permeate into some police departments, which has evolved. This is not to say that all police act in an overly aggressive manner. In fact, the vast majority of police are pillars of their community, and individuals that put their lives on the line to guarantee the law and order of the neighborhoods and towns they serve.

As a New York State Court has ruled on Stop & Frisk, African-Americans and Hispanics are far more likely to be stopped by police even if they do not have illegal substances or are committing crimes.

Vivian Huang ’17 said, “As an Asian-American, I know that I face some racial disparity, such as representation in government and the media. But at least I know the cops won’t randomly pull me over for wearing a hoodie. It’s because when it comes to confronting law enforcement, being African-American carries such a negative connotation in some people’s minds.”

African-Americans are more likely to be stopped by police than their Caucasian counterparts, according to a report by the Bureau of Justice. A New York State Court ruled on Stop & Frisk, reaffirming this fact that African-Americans are are far more likely to be stopped by police even if they do not have illegal substances or are committing crimes. Although this is a major law enforcement issue regarding racial profiling, what has really created a stir in recent years has been the nature of  stop and frisk as well as the confrontations that ensue, especially when people of color are stopped.

Fabliha Hussain ’18, a member of Bronx Science’s Muslim Students’ Association and someone who is very passionate about racial issues, said,”I feel like police brutality is a big issue in the United States, but we need peace and reconciliation on both sides. My feelings on this are deeply influenced by my Islamic faith which advocates non-violence.”

African-Americans face disproportionate amounts of force of use of violence by the police. They are more likely to face violence or confrontation by the police, and according to a report by the Inter-American Commission on Human Rights. In a study of LA in 2003-2004, for “every 10,000, about 3,400 more black people are stopped than whites.” It goes on to detail how African-Americans are more likely to be searched and frisked.
As a New York State Court has ruled on Stop & Frisk, African-Americans and Hispanics are far more likely to be stopped by police even if they do not have illegal substances or are committing crimes.
We need to provide a voice to disgruntled members of the African-American community who continue to see discrimination, even over five decades after the Civil Rights Act.

Sabiha Chowdhury ‘17 said, “There is definitely something going on in this country about how police deal with minority communities. It’s not an easy conversation, but it’s something we need to talk about.”

Instead of discounting claims, we need to avoid polarization on both sides of the debate, and come together to find a balanced solution that responsibility reforms policing in the United States while bridging law enforcement and the communities they serve. This includes community policing, a strategy that has been implemented in a number of communities, including parts of Los Angeles, Las Vegas, and New York. The Community Oriented Policing Services boasts community policing as a solution that has helped communities of color, and police departments responsible for their safety, to come together.

Many African-American communities continue to see a revolving door of poverty and degradation. There’s no doubt that not all police are bad or use excessive force. “Ever yday, coming to school and outside of the campus, I feel so much safer with the police presence here,” Chowdhury said, “but racism is still real, and beyond just fighting these perceptions of African-Americans, we need to invest more in communities and police training.”