Riot Grrrl: An Underground Movement With An Aboveground Influence

In the late 80s, a feminist movement was born out of the sexism present within the punk scene. 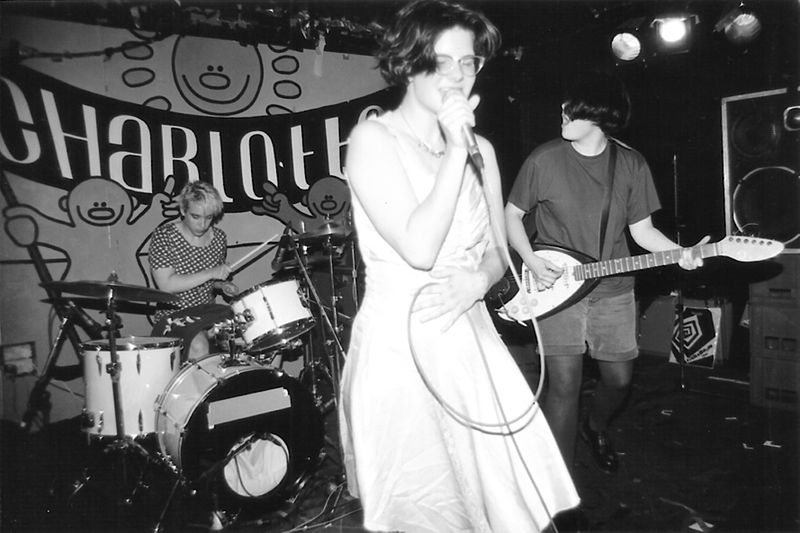 Here is a photo of the lead singer Allison Wolfe of Bratmobile performing live. Members of Riot Grrrl bands often wore very feminine attire to show that femininity does not equal weakness.

We often associate punk with stick-it-to-the-man attitudes and rejecting the prejudices and traditions that have marred the past. Unfortunately, punk is not immune to discrimination, especially discrimination against women. Punk is definitely a male-dominated industry, with the most famous punk rock bands — The Ramones, The Misfits, and Black Flag — being entirely composed of men. Women have often been sidelined and discouraged from being a part of the scene, and since its inception few women have been present in the punk scene. This problem persists today; even seasoned punk listeners struggle to name five different punk bands with female members.

Punk rock was fairly feminist throughout the 1970s, with standing up to the patriarchy falling in line with the ideals of self-empowerment and breaking tradition. However, as punk became more commercialized, it moved on from any feminist tones it may have possessed, and instead embraced a more mainstream and sexist view of women. This worsened with the rise of hardcore punk, which encouraged hyper-masculine ideals and continued to push women out of this scene.

Hardcore punk bands such as Vile or rock bands like Steel Panthers utilized extremely sexist and homophobic language in their songs on a regular nasis. This behavior amongst popular bands further turned this scene into an uninhabitable place for women and the LGBTQ+ and perpetuated the idea amongst their almost entirely straight cis-male fanbase that it was cool to be a bigot and to push minority groups out of the fanbase.

The Riot Grrrl movement was a response to these attitudes. Beginning in Olympia, Washington with a group of young third wave feminists (a form of feminism emerging in the 60s and 70s focused on reproductive rights and critiquing unfinished progress made by second wave feminism) from the Pacific Northwest region met in Olympia’s Evergreen College to discuss the obscene sexism that punk was riddled with. The group started out creating the fanzine “Bikini Kill,” and decided to become a band in order to further spread their feminist ideas. The band kept the same name of Bikini Kill, with Kathleen Hanna as the lead singer, Billy Karren on the guitar, Kathi Wilcox on the bass, and Tobi Vail on the drums of the most well-known Riot Grrrl band.

Following the creation of Bikini Kill came other Riot Grrrl bands including Bratmobile, Le Tigre, Sleater-Kinney, and Heavens to Betsy.

This group of feminists started off their movement by sending out zines — short for fanzines — which are self-published magazines, usually printed via photocopier, with less than 5,000 copies being distributed. These zines represented firsthand accounts of oftentimes marginalized voices, and centered on domestic abuse, eating disorders, discrimination, homophobia, racism, and sexism.

In 1991, the Riot Grrrl Manifesto was published in the Bikini Kill Zine 2, which talks about why these women were starting this movement, with lines like, “BECAUSE us girls crave records and books and fanzines that speak to US that WE feel included in and can understand in our own ways,” and, “BECAUSE we are unwilling to let our real and valid anger be diffused and/or turned against us via the internalization of sexism as witnessed in girl/girl jealousism and self defeating girltype behaviors.”

You can see the feminist-driven origin in the songs by these bands, with lyrics like “When she talks, I hear the revolution/In her hips, there’s revolutions/When she walks, the revolution’s coming/In her kiss, I taste the revolution!” These lines are from Bikini Kill’s song Rebel Girl, which centers around female empowerment and standing up to oppression. Specifically, the song is centered around a revolution, and how a feminist revolution is just around the corner, with Bikini Kill and other Riot Grrrl bands being the harbingers of this change that is to come.

Riot Grrrl also allowed more women to feel more secure in being a music listener. Even now, there is an idea that in order for a girl to have a “good” taste in music, she has to have been introduced to them by a boy. However, Riot Grrrl created a music scene geared towards women, allowing women to feel much more comfortable going to concerts, and feel represented in the music they consume.

In spite of all of the good that Riot Grrrl champions for, it is not immune to criticism. As Andy Chan ’22 said, “I think that there could be issues with inclusivity since the Riot Grrrl movement often focused on middle-class white women, leaving other women feeling alienated.” While the main players in this movement did bring up racism and homophobia in fanzines and in the Riot Grrrl manifesto, the most popular Riot Grrrl bands were almost entirely comprised of white women, which provided a much more narrow view on issues like how race factors into sexism, and led to discrimination from major music scenes.

Bianca Ortiz, creator of the zine Mamasita, said on the issue of race within Riot Grrrl, “I am sick of being the example, the teacher, the scapegoat, the leader, the half Mexican girl in the group of ‘allies’ who either attempt to praise me or destroy me, or both at once.’’ This quote shows that many of the anti-racist ideas used in major zines were superficial, and not backed up by this movement’s treatment of BIPOC women.

There is also the issue of the Michigan Womyn’s Music Festival, a music festival with a history of being transphobic, down to one of its policies only allowing for “womyn-born womyn.” In 1991, a woman suspected of being transgender was removed from the festival due to this suspicion, which made it clear that this policy was meant to exclude transgender women.

This treatment towards trans women goes against the very goal of Riot Grrrl, which has always been to provide a space for the marginalized and include everyone in this music scene.

The goal of empowerment and inclusivity within this movement is further proven by the most notorious phrase that came out of this movement: “Girl Power.” This phrase can be credited to Bikini Kill, specifically their zine “Bikini Kill #2: Girl Power.” While this phrase started out being empowering because of how novel and against the grain it was, it became diluted and commercialized for all it was worth. “Girl Power” is now known as an easy way for media companies to present themselves as woke and progressive as opposed to its original goal of challenging the standards of the patriarchy. This can be seen in ad campaigns like #GirlsCan by Cover Girl or #LikeAGirl by Proctor and Gamble. But the separation of this phrase from its original intent is not emblematic of the Riot Grrrl movement being dead or pointless.

In fact, the movement remains alive on platforms like Tiktok and Instagram, with any searches for Riot Grrrl yielding countless results of people producing fanzines, Riot Grrrl inspired outfits, giving song/artist recommendations, or just speaking on the history of this movement. Videos tagged with Riot Grrrl on Tiktok have more than 94 million views, showing that there is still an audience for this kind of content.

What’s more, many of the very bands that founded this movement have returned throughout the 2010s. Sleater-Kinney released their album No Cities to Love in 2015, and Bikini Kill announced they were coming back to music on January 15th, 2019. Lizzo even opened for Sleater-Kinney’s 2015 tour, showing that Riot Grrrl is becoming a more diverse space, even if this change is happening slowly.

The influence of Riot Grrrl is still very much alive, with this brand of feminism paving the way for women to be active within music, especially in the punk rock scene. Modern day Riot Grrrl bands, such as VIAL or The Regrettes, place an emphasis on fostering a more inclusive community, with bassist for VIAL Kate Kanfield saying, “As riot grrrl was imagined to be a community for people who were misrepresented, underrepresented, or just not… listened to, if we bring it back in any capacity there has to be serious conversations about it…[and an] understanding that we have to do everything we can to make sure it’s not like it was.”

That is not to say all of the hard work is done, as women continue to be underrepresented and discriminated against within the music industry. It is easy to feel discouraged about the state of things with disheartening percentages like how only 2.6% of producers are women, and how women only make up 17.1% of popular artists in 2018.

But Riot Grrrl has shown us that, instead of passively writing think pieces about sexism in the music industry without actually doing anything to change it, we don’t have to accept how things are. Everyone – not just women – has to be upfront and open about their anger in order to get to a point where women can be more represented and feel more comfortable in the modern day music industry.
Bianca Ortiz, creator of the zine Mamasita, said on the issue of race within Riot Grrrl, “I am sick of being the example, the teacher, the scapegoat, the leader, the half Mexican girl in the group of ‘allies’ who either attempt to praise me or destroy me, or both at once.’’