'Elden Ring,' the product of Game of Thrones’ George R.R. Martin and game developer Hidetaka Miyazaki, finally was released earlier this year. With the game and its patches out, and summer sales in full swing, should you consider an adventure into the Lands Between? 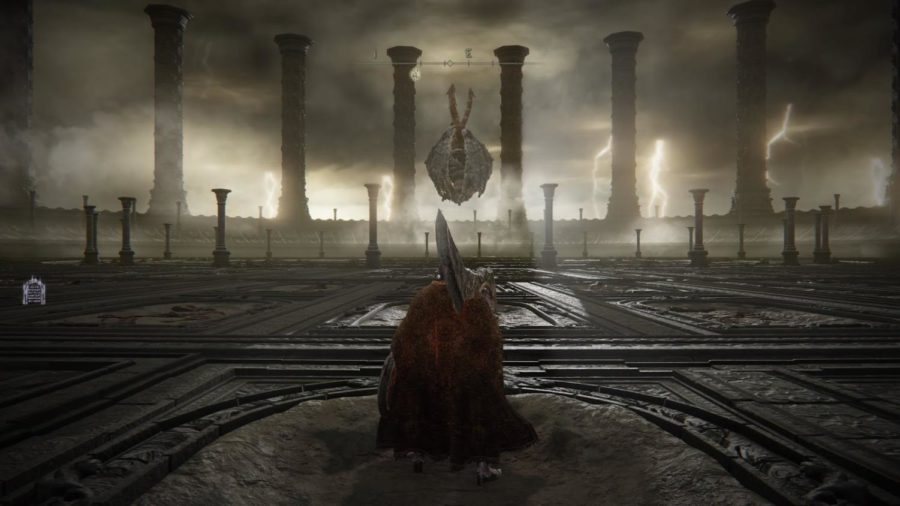 My character faces the formidable Dragonlord Placidusax inside of a tornado - one of Elden Ring’s most memorable set pieces.

The spiritual successor to one of the most infamous franchises in gaming. The most anticipated release of 2022. The heir apparent to the Game of the Year award. In the five months or so since its launch, Elden Ring has been lauded as all three. Alongside this praise, there has been a slew of passionate criticism from thousands of critics for whom the game has been a massive disappointment.

So, what’s going on with Elden Ring?

The new title, a collaboration between the notorious studio FromSoftware and novelist George R.R. Martin, gives players a new open world that imports much of the gameplay from the studio’s legendary Dark Souls trilogy, with an added element of freedom.

All the way back when it was announced at E3 (Electronic Entertainment Expo) in 2019, Elden Ring inspired massive hype, which only grew over the game’s very lengthy development cycle. Right out of the gate, I should say this: I was not a part of that hype. Dark Souls 3 remains one of my favorite video games, but in the almost six years since it was released, my excitement for the franchise died down.

What finally convinced me to try the game was the craziness surrounding the launch. It felt like the second Elden Ring dropped, critics were throwing around words like ‘classic’ and ‘masterpiece.’

Well, I have beaten the game five times as of now (twice on my first character), and I can safely say that while it might not be the perfect magnum opus that people seemed to decide it was on launch day, it is still one of the greatest games I have played and an incredibly high standard for the open world genre going forward.

Now into the specifics. Elden Ring carries on the franchise tradition of refusing to handhold players.  It drops you into the expansive, scary world of ‘the lands between,’ playing as a ‘tarnished’ warrior, and after an optional tutorial, leaves you to fend for yourself.

This choice is probably the biggest innovation of Elden Ring. The open world genre has received a lot of criticism lately for being characterized by empty space and filler quests that never amount to much more than walking somewhere, talking to an NPC (non-player character), then walking back for more expository dialogue.

Vainhav Hariani ’22 added that, “Open world and linear games are each nuanced in their own right and have unique benefits — open world games have just become more popular, meaning many use gimmicks to differentiate themselves. This leads to sparse, unoriginal games, and I think developers need to start rethinking their approach to keep things original.”

In contrast, Elden Ring sharply breaks with the open world formula by minimizing its dialogue, almost entirely forgoing the idea of side quests, and filling up the expansive world it portrays with hundreds of ruins, caves, dungeons, and temples in order to keep players engaged. This approach still allows for some memorable characters and exciting encounters; however, the game doesn’t force them or their quests on the player. Instead, it waits for the tarnished to come across them organically.

It is a style that no doubt draws heavily from Nintendo’s hit The Legend of Zelda: Breath of the Wild that was released in 2017, forcing the player to explore the entire expansive world and stumble into their own adventures. This design might sound hostile at first, but it works thanks to the sheer amount of content spread across Elden Ring’s world. In the lands between, one never has to go more than a minute in any direction to stumble on a new ruin, castle, or dungeon to explore.

The variety in content is reflected in the massive arsenal of gear that players can choose from, including various spells, weapons, talismans, and armor. It always feels as though there is just as much incentive to wander around looting dungeons as there is to progress the main story, which itself boils down to a series of much more elaborate castles for the player to conquer.

The road to becoming the Elden Lord of the lands between is marred by a few major issues, though, which have become more obvious since the post-launch honeymoon period.

First, with so much content, it was inevitable that not everything could be completely original. The use of repeated bosses in particular hampers the feeling of exploration, but small changes do create a sense of variety. For example, the Erdtree Avatar — a giant treelike creature wielding a golden stafounter — presents slight differentiations in the avatar, such as new attacks, duplication, and the use of the devastating (extremely annoying) ‘scarlet rot debuff.’

Another, more aggravating flaw with the game is its internal balancing. There is no problem with a game having a hard baseline difficulty and becoming harder from there, provided it is at a consistent rate. But at about ⅔ through the main story, Elden Ring hits a huge difficulty spike in the ‘Forbidden Lands’ that might lead to a lot of, I would argue, justified frustration.

The tradeoff of having so much side content also becomes much more clear as some of the game’s later ‘main’ bosses feel poorly tuned. For example, the infamous Godskin Duo is just two earlier bosses (the Godskin Noble and Godskin Apostle) fighting as a team; however, the fact that the bosses’ attacks are not synchronized makes the player throw everything they thought they knew out of the window and become overly cautious, while praying the duo doesn’t just decide to surround and finish them off.

There is also the final area’s first boss, which I won’t spoil, who is essentially a joke due to having a tiny health pool and basically letting the player maul him by going into a lengthy monologue during the fight. This is a very disappointing outcome considering the relatively high amount of ploy development that goes into the encounter, and the great concept that it is based upon.

These problems with balancing stand out much more to those who have experience with FromSoftware’s work because of the impossible bar set by Dark Souls, Bloodborne, and Sekiro: Shadows Die Twice. While again not perfect, they all (with the arguable exception of Dark Souls 2) progressed in a way that felt methodical, with difficulty gradually rising to meet, or barely exceed, the skill of the player. On the other hand, the openness of Elden Ring compared to those games at least gives everyone — even the inexperienced — the ability to overcome whatever overpowered enemy is thrown at them, or (most of the time) skip it outright to find content that is within the realm of possibility.

Extra freedom afforded by the open world genre also helps address the difficulty question that has turned off thousands of players since the release of Demon’s Souls. Every title has revived the often intense debate over whether the souls-like genre’s punishing mechanics make for good experiences, and if an easy mode should be implemented.

Proponents highlight that an easier difficulty would not necessarily detract from the quality of the harder modes, whereas opponents typically note the tradeoff of the development time that would be needed to make easy mode possible. Additionally, this debate has spawned the meme ‘Git Gud,’ which dismisses critics as just not having the tenacity to learn the game’s mechanics.

On the debate, Colin Lam ’22 said, “You shouldn’t complain about the game being hard — the best part of the game is improving, and mastering the system.” He added, “Because Sekiro [Shadows Die Twice, FromSoftware’s most recent game before Elden Ring] is super hard, after I beat it, I felt very satisfied.”

Elden Ring circumvents this entirely by giving players the freedom to level up through engaging dungeons, bosses, and areas that will give them the strength to decimate challenging threats without needing much skill. Alternatively, those masochists who have sunk hundreds of hours into the Souls games have the option to sidestep entire areas to make the experience even more difficult.

In addition, the vast array of options available to players can help alleviate much of the game’s difficulty, to the point where it can feel unfairly easy. Specific combinations of weapons, rings and armor can tear through even the hardest bosses (for example, some builds focusing only on the sorcery stat can instantly kill bosses, while ones using the bleed mechanic can shred through just about anything) while others can give the player a solid toolbox without destroying the game’s difficulty.

Overall, Elden Ring is a fantastic game on its own merits and a solid answer to difficulty in the franchise. It is not perfect, but it is well worth the time you spend playing, and it is probably the only recent major release that I could recommend at the $60 price point (that said, enough time has elapsed that a sale could be in the cards for the next few months).
The spiritual successor to one of the most infamous franchises in gaming. The most anticipated release of 2022. The heir apparent to the Game of the Year award. In the month or so since its launch, Elden Ring has been lauded as all three. Alongside this praise, there has been a slew of passionate criticism from thousands of critics for whom the game has been a massive disappointment.