The Show Goes On: Broadway During the COVID-19 Pandemic

Broadway has an inextricable link to the cultural heart of New York City. 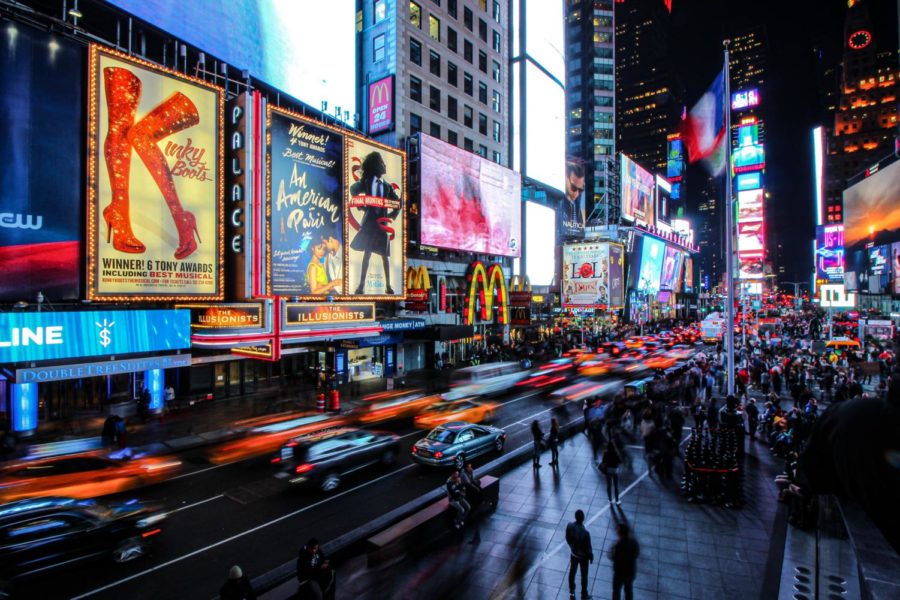 Here is Times Square on a busy afternoon, pre-COVID-19 pandemic.

If Broadway could be encapsulated in a single word it would be: crowded.

It starts when you leave the subway station and step out into Times Square. There are people everywhere, crossing the streets, avoiding traffic, and evading the onslaught of pedestrians. Tour buses and honking taxis fight against public transport and cyclists, as tourists and natives alike queue up for discount tickets at the red TKTS booth. Others run to the office, rushing past vendors hawking anything from sunglasses to phone cases and “I Heart NY” T-shirts.

After weaving your way through all of these distractions, you arrive at the theater, faced with a new crowd — a mass of people, clutching tickets in their hands. You file into the lobby, following the usher’s directions, as you finally make your way to your seat. Perhaps you take a moment to turn around and look up, and realize that there are hundreds of other people also waiting for the show to begin.

Still, the crowd extends beyond the red curtain that hangs at the front of the stage. Behind it, crew members ensure that set pieces are in the right spot, performers jostle their way to their marks, and dressers make one last check that their actors have the right costume props. All of this comes to an abrupt halt as a voice echoes over the intercom:

“Good evening ladies and gentlemen, and welcome to the theater. This evening’s performance will begin shortly.”

Nevertheless, the show tried to go on. There were Zoom cast reunions, as well as filmed and live-streamed performances. But live theater was gone. And anyone employed in that sector, from stage managers and box office personnel to makeup artists and even the actors, found themselves in a precarious situation. That anxiety was supplemented with the uncertainty of when Broadway would return.

This concern would be addressed as the Delta variant’s virulence began to wane during the summer of 2021, and theater owners and producers began to tentatively prepare for Broadway to reopen.

Dr. Mark Swartz, a theater historian and Director of the Shubert Archive, noted, “The industry’s state of mind last fall was one of tempered optimism — a general belief that the audience’s desire to return to the theater was strong, they just needed to be shown that it could be done safely.”

And it was. Popular shows like Hadestown and Hamilton reopened to masked audiences with a meticulous safety protocol in place. And to commemorate the industry’s return, the Tony Awards even aired a special program dubbed “Broadway’s Back!” on CBS and Paramount+.

But that exuberance was short-lived. The Omicron variant’s surge during this past winter of 2021-2022 brought a new wave of closures. Some productions opted to shutter temporarily, promising to return in the spring, while shows like Ain’t Too Proud, a musical about the Temptations, lowered their curtains permanently.

Dr. Swartz noted, “Many shows had to cancel performances because of cast illness. This peaked during Christmas and New Year’s weeks, traditionally among the highest grossing weeks of the theatrical season.”

A period of devastating financial loss during what is supposed to be one of the most profitable times of the year was matched with another grim observation. “With the traditionally slow post-holiday season coming, many shows closed permanently, and new shows that were planning on February and March openings, delayed their rehearsal periods and opening dates,” said Dr. Swartz.

But Broadway’s grosses are not simply statistics in a vacuum, only affecting the industry itself. Rather, as Dr. Swartz argued, “Broadway is profoundly linked to the tourism industry. This has become increasingly the case as production costs and ticket prices have soared.”

If the theater industry is profiting, that means tourists (who make up 65% of ticket-buyers) are visiting the city, and therefore can boost the city’s economy. In fact, during the 2018-2019 season, Broadway ticket sales contributed $14.7 billion to the New York City economy, while supporting over 90,000 local jobs.

To have all of this impacted by COVID-19 and the Omicron variant, deals a devastating blow to New York, and not just financially. Dr. Swartz described the uncertainty of theater-goers during the past winter where shows would regularly cancel performances if cast members were sick. “The shuttering of shows shook audiences’ confidence both in terms of COVID-19 itself, and in terms of not knowing from one minute to the next if a show you had tickets to would actually take place when you got there.”

If one could not count on one of the most unwaveringly resilient industries (“the show must go on!”), why would one purchase a ticket, much less visit the city?

“Broadway is at the core of our New York identity,” declared former Governor Andrew Cuomo. And what is that identity, if not one of tenacity?

This is the industry that saw more people in attendance than any New York City Metro Area professional sports team events combined. And this is the industry, along with many other sectors, that had to contend with concerns about the city’s future in the aftermath of 9/11.

“There was a lot of fear that audiences would be too scared and too upset to come to Broadway, and that tourists would stay away in droves,” Dr. Swartz noted about Broadway following 9/11. “Nevertheless, a strong marketing campaign built on the idea of resilience and strength and the need to support New York City worked well to bring people back fairly quickly.”

But 9/11 was not the sole challenge that Broadway, and the city itself, would have to face. New York City saw 39,902 residents die from COVID-19. But it also saw thousands open windows or stand on fire escapes and rooftops to bang pots and pans, play instruments, and cheer on essential workers every evening at 7 p.m.

The industry will continue to revive as the spring season approaches. Traditionally during this time, new productions open, and the 2022 season is no exception, as there are 16 shows planning to start performances as the weather begins to warm.

But, perhaps most importantly, a new wave of tourists and eager locals will arrive at the theater during spring break and Easter. They will be met with the same crowds as they leave the train station. There will still be vendors hawking their wares and busy businessmen with their briefcases. There will still be lines outside the theater and chaotic lobbies filled with eager attendees and exasperated ushers. There will also still be, unbeknownst to the audience, the same flurry of excitement backstage as last-minute adjustments are made.

The only new feeling is a lingering sense of loss, the quiet understanding that the city is still in mourning, despite signs of its resurgence.

But in a moment and for a moment, when the curtain rises, none of that will matter.
“Broadway is at the core of our New York identity,” declared former Governor Andrew Cuomo. And what is that identity, if not one of tenacity?