The Unseen Art of Gallery Design

Curators and artists reveal the many decisions that go into creating an engaging and meaningful exhibit. 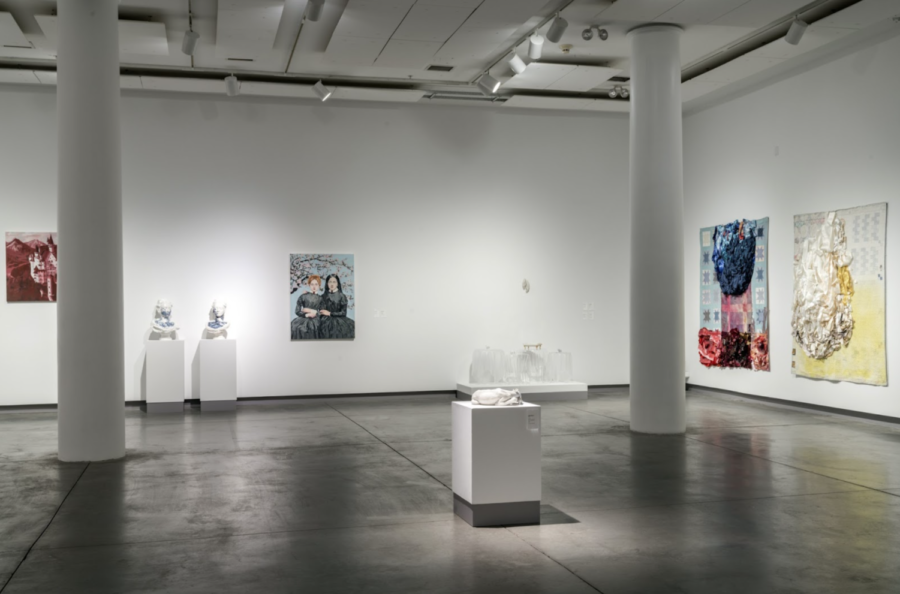 The exhibit 'Confabulations of Millennia' at the Institute of Contemporary Art in Portland, Maine, curated by Richard Saja, included work from numerous contemporary artists whose art incorporates styles and techniques from the 17th, 18th, and 19th centuries.

Even in a world where millions of artworks can be viewed and researched online, art museums and galleries are far from obsolete. Only these places allow us to examine the peaks, swirls, and brush strokes of an oil painting, walk slowly around a vase in a display case, and point out hidden details to a companion. Art isn’t simply for viewing, it’s for exploring: it has the power to transform the ways in which we view current and historical events, the world around us, and ourselves.

For centuries in the Western world, well-renowned artists’ works were viewed only by society’s aristocrats, but the rise of public museums in the 18th century allowed the public to experience art as well.

Today, although the COVID-19 pandemic caused many museums and galleries to close their doors to visitors, the vast majority of them reopened in 2021, allowing visitors to appreciate art in-person and up close.

But there’s a hidden art that allows the pieces to shine, and works to create the most engaging and informative experience for visitors: the design of the gallery itself. Whether an exhibition displays work from a singular artist, time period, or theme, design plays a crucial role in telling the stories of the artwork.

Museums employ curators and designers to oversee the acquisition and display of art pieces, along with many other aspects of gallery and exhibit design. They help individual pieces flow together into a cohesive and immersive exhibit, allowing visitors to fully connect with the art on display. I interviewed several curators and artists to learn more about the design process behind their exhibitions.

Richard Saja, a New York-based visual artist and curator, said his process when creating a show begins with “putting together a group of work you feel strongly about, approaching the artist to see if that work is available, then collecting the work all in one place.” The most important step, he said, is “laying things out physically — figuring out where things are going to go and making those relationships happen in the room where the art is going to be displayed. That’s the part where the magic really happens. You see relationships occurring that you kind of knew were there, but seeing them in the flesh, it’s very interesting and powerful.”

Unique choices in gallery design reward visitors who interact with art in an active way. In one of Saja’s exhibits at the Institute of Contemporary Art in Portland, Maine, entitled “Confabulations of Millennia,” the design forced viewers to do more than simply glance around at paintings hung at eye level. “I had one installation all the way at the top of the ceiling wrapped around a column, and there were other small sculptures in the corners of the room,” he explained. “So you really had to pay attention to the physical space you were in to see all the art that was in the room. It might not be noticeable if you weren’t looking around — if you were just looking at the walls. But there was really art everywhere.”

Pristine, ultra-white walls may be the norm for displaying contemporary art, but if you pay a visit to the Whitney Museum of American Art, or several newer galleries at the Museum of Modern Art (MoMA), you’ll see that curators have taken a new approach. Gray, muted purple, pale yellow, and cobalt blue galleries at these museums prove that white isn’t the only way to make artwork stand out. Explaining the philosophy behind the changes at MoMA, Lana Hum, the museum’s Director of Exhibition Design and Production told Artsy magazine, “All of the works at the time they were made were revelatory and radical, and we wanted to capture that. But we found that the white box falls short. It’s too anonymous. It doesn’t give you enough context.”

For artists, having their work on view sometimes means letting go of control, both in terms of how their work is displayed and how it is interpreted by viewers. Curators are tasked with creating the themes of an exhibition, communicating these themes, and tying artworks into a singular narrative.

Some exhibitions are devoted to the work of a singular artist. Others might explore a movement in the art world or recurring themes such as loss, political turmoil, and personal identity. Pedro Barbeito, a visual artist and professor of art at Lafayette College spoke to me about the value gained from group exhibits, both for artists and visitors.

“Artwork should not be didactic. It should allow viewers to see whatever they want to see. Some people engage with my work in a way that I appreciate — I would say this is the minority of viewers. I can’t control this; I can only make work that engages me. This is why I enjoy participating in group exhibitions,” Barbeito explained. “It allows for the ideas I’m interested in to be shared through numerous lenses and bounce off each other. Each artist’s work supports and informs the conceptual premise of the other works. Viewers still see what they want to see but there’s more of a direction to guide the interpretation.”

Curatorial work is often done in conjunction with museum directors, artists, collectors, installation crew, and interior designers. Though curators typically have the final say, collaboration can aid them in conveying the artists’ intentions.

The extent to which an artist’s wishes influence how a particular piece of art is displayed depends on many factors, including their level of success and relationship with the institution where they are exhibiting. Location also plays a role, as it’s quite common for artists to have their work displayed across the country or world. “A lot of times you don’t have any choice because you’re not there,” Saja said.

Some curators find that excess input from artists can complicate their jobs. “Sometimes artists will show up to an exhibition,” but as Saja explained, “It’s sort of akin to a realtor showing a house. They never want the owner there because they complicate things. I feel like curators feel the same way about having artists present a lot of the time.”

At the same time, it can be frustrating for artists when their preferences are not taken into account. “There was one exhibition in particular where I almost decided to not show my work,” Barbeito said. “I was installing my work for a solo exhibit at a prestigious New York City gallery, and the dealer of the gallery did not agree with how I wanted to present the work. I had a very particular installation in mind where each painting would be paired with the drawings that had inspired it.”

“The dealer disagreed and insisted that the drawings be shown together on one wall and the paintings be shown individually. He said my idea was just too unconventional,” he said. “We argued for two days over this and the dealer eventually brought in an important collector who supported the dealer’s design for the exhibition. Frustrated and without support for how I wanted to install the work, I finally relented and allowed the dealer to have his way.”

The Art of Compromise

Beyond balancing their vision for an exhibit with the desires of the artists, curators must consider how art will shape its community. Nathan Mason, the Curator of Exhibits and Public Art for the Chicago Department of Cultural Affairs and Special Events, spoke of how contemporary museums in small towns transformed these locations into meccas for art and culture. “Until Dia:Beacon moved there, who would’ve thought that old factory town would become a site of contemporary art?” said Mason, adding that it is the job of artists and their representatives to figure out how to best connect with the community.

“It’s a matter of respect,” he said. “You can push boundaries, but you still have to have that amount of respect.”

Though their artworks might not be the ones on display, one of the most important skills curators have to offer is their mastery of the art of compromise. Like the work of talented painters or photographers, exhibition design involves a skilled command of composition and balance. On a canvas of consideration for the context in which the art is being viewed, designers blend their expertise and vision with artists’ desires, thus creating a sense of harmony.
“Artwork should not be didactic. It should allow viewers to see whatever they want to see. Some people engage with my work in a way that I appreciate — I would say this is the minority of viewers. I can’t control this, I can only make work that engages me. This is why I enjoy participating in group exhibitions,” artist Pedro Barbeito explained.