The Life and Music of Jazz Guitarist Pat Martino

A tribute to the brilliant guitarist, who performed for five decades against insurmountable odds. 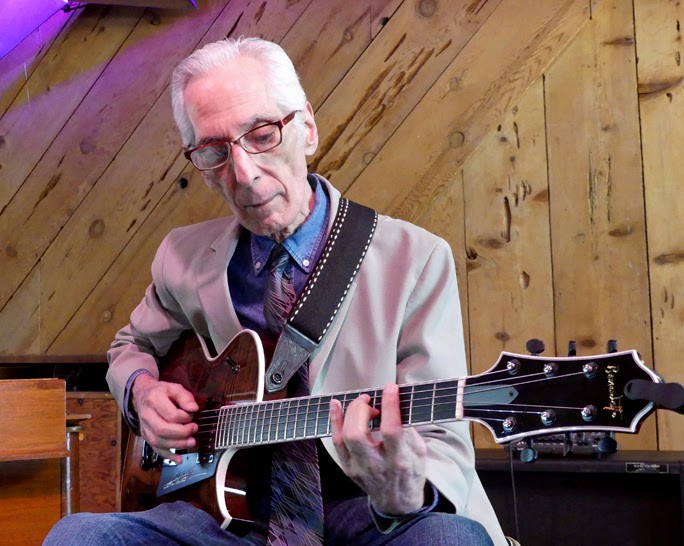 Legendary guitarist Pat Martino passed away at the age of 77. He had been facing a chronic respiratory disorder since 2018.

Pat Martino was a world-class musician. Twice. By 1980, the 36 year-old had dozens of albums and collaborations under his belt. He was regarded as one of the best jazz guitarists on the planet. Then, Martino underwent brain surgery. This caused him to lose most of his memory, and he completely forgot how to play the guitar. In the face of these odds, Martino returned to his craft, falling in love with the instrument all over again. In 1987, Martino released ‘The Return,’ showing an undiminished greatness and kicking off the second chapter of his career. He went on to perform masterfully for decades longer.

Pat Martino passed away on November 1st, 2021. The 77 year-old spent his last days in his South Philadelphia childhood home, surrounded by family. He leaves behind an inspiring story and impressive discography.

Martino was born Pat Azzara on August 25th, 1944. Martino’s father, Carmen Azzara, performed guitar as a side-hustle. He kept his guitar in his room, where it was “off limits” for Pat. In his autobiography, Martino suggests this was “a bit of reverse psychology on his part,” as his father’s restrictions only lured him to the instrument. At 11 years old, Martino got his own guitar and began taking lessons. He studied with Dennis Sandole, who also taught John Coltrane.

At age 15, Martino dropped out of high school and began to tour in numerous bands. He signed with Prestige Records at the age of 20 and released his debut solo album El Hombre two years later. The music, which was placed over a steady background of organs, showcased a guitarist with a wide range of stylistic expertise.

The song ‘Once I Loved’ exemplifies the greatness of Martino’s debut. The song both starts and ends with a playing style inspired by jazz guitar legend Wes Montogomery. Martino plays with Montgomery’s signature “octave style,” incorporating slow melodic lines that include two octaves of each note. During his first solo, Martino leaves this style behind in favor of lightning-quick eighth notes that shape into seemingly never-ending lines. Martino is the only soloist on the song, putting his guitar in the spotlight for all six minutes. On “Once I Loved,” and El Hombre as a whole, Martino’s playing sounds complete. He plays with a youthful energy and yet is backed by a more serious drama that is informed by his soulful sound and blues embellishments.

Although Martino is often regarded for his impressive adaptation of Wes Montgomery’s guitar playing style, he was also a daring experimenter, pushing jazz forward while also paying respect to the genre’s traditions. On 1968’s ‘East!,’ Martino opened the album by mixing his traditional hard-bop style with the instruments and motifs of eastern music. In the succeeding album ‘Baiyina (The Clear Evidence)’ (which is subtitled “A psychedelic excursion through the magical mysteries of the Koran”), Martino elevated  his cultural exploration to a new level. The incorporation of Indian instruments, as well as “strange” scales and time signatures, results in an album that (to a fascinating effect) jumps completely in and out of the jazz genre.

In the 1970s, Martino continued to experiment with his sound. On 1972’s ‘Live!,’ Martino covered the pop song “Sunny,” filling in the song’s catchy words with relentless guitar lines. The song was met with positive reception and it became a staple of Martino’s live shows for as long as he would perform. In 1976, Martino released Joyous Lake, jumping on the jazz-fusion wave that Herbie Hancock and Miles Davis led during the decade.

Throughout his career, Martino suffered from seizures. He was misdiagnosed with manic depression and tried his best to not let his medical situation disrupt his performance. In the few years after Joyous Lake, however, Martino’s condition worsened. While teaching in California during 1980, Martino suffered an intense aneurysm that landed him in the hospital. The doctors ran a brain scan revealing that Martino had arteriovenous malformation, a cluster of blood vessels in his brain prone to bursting. Martino was told he had one day to live. He returned to his home city of Philadelphia and underwent immediate surgery. Although the surgery was successful in the removal of the malformation in Martino’s brain, it left him with severe retrograde amnesia.

In his 2011 autobiography Here and Now! Martino described his process to recovery. “Upon awakening after the surgery, I remembered nothing,” he wrote. “If I had known I was a guitarist, if I had known those two people standing by my bedside in the hospital were in fact my parents, I then would’ve felt the feelings that went along with the events. What they went through and why they were standing there looking at me then would’ve been very painful for me. But it wasn’t painful because to me they were just strangers.”

Upon his return home, Martino’s father slowly reintroduced him to jazz music by playing Martino’s live recordings for him. Whether or not Martino could fully understand what he was hearing, he was in fact learning from one of the best guitarists on the planet –– himself. When Pat Martino returned to the guitar, he picked it up with a renewed, childlike curiosity. As he figured out the instrument, Martino explained in his autobiography, “flashes of memory and muscle memory” returned to him.

In the same year he released his autobiography, Martino told The Philadelphia Inquirer that his aneurysm was “the greatest thing that ever happened to me.” With the loss of memory came a valuable change in perspective that Martino would live by. “What’s on my mind,” he told The Philadelphia Inquirer, “is a greater focus with more intimate accuracy on each and every moment so that I can truly focus on what life is really all about. The mind has a way of thinking about things that have nothing to do with the moment, but if I can love my life in that moment, I’m in the right place at the right time.”

What Martino once viewed as a career became an immovable way of life. “Music is not a craft, it’s a condition,” Martino stated in his own words. In the “second leg” of his career, Martino put aside notions of commercial success and competition. He placed a deeper focus on his  love of music and exploration of himself through instrumentation.

Though his mindset had undoubtedly changed, Martino’s explorations of himself resulted in familiar musical inclinations. The playing on the dozens of projects Martino worked on after his surgery is completely on par with the recordings which had originally brought him fame.

In 2001, Martino collaborated with famous hip-hop drummer Questlove on ‘The Philadelphia Experiment,’ showing his everlasting desire for experimentation. In 2006, Martino released ‘Remember: A Tribute to Wes Montgomery,’ showing that his musical influences were unwavering. On his final album, 2017’s ‘Formidable,’ Martino played a cover of the title track from his first ever album, ‘El Hombre.’ Although the fifty year difference inevitably resulted in a different sound between the two recordings, neither ‘El Hombre’ is more ‘Pat Martino’ than the other. Despite all he had been through, Martino was the same brilliant guitarist at his core.

In the later years of his life, Martino used the internet to reach other guitarists. Through dozens of Youtube lessons, hundreds of blog posts, and a series of educational videos entitled ‘A Study of the Opposites and How They Manifest on the Guitar,’ Martino sought to share his philosophies (about guitar and life in general) with the world. Whether it is from his geometrical view of musical intervals, strategies of connecting chords, or simply his insistence on being present in the moment, musicians from all over the world have been able to learn from Pat Martino.

Despite the technicality of his guitar lessons, Martino wrote on his own blog, “I’ve always depended upon my own melodic instinct, instead of scale like formulas.” If it was that melodic instinct that brought the world five decades of Martino’s greatness, we should thank him for depending on it.

“The mind has a way of thinking about things that have nothing to do with the moment, but if I can love my life in that moment, I’m in the right place at the right time,” said Pat Martino.