‘The French Dispatch’: A Passionate But Hollow Love-Letter

Wes Anderson’s latest film is immersed in a love for France and for great journalism, but it struggles to back up that passion with often undeveloped characters and themes. 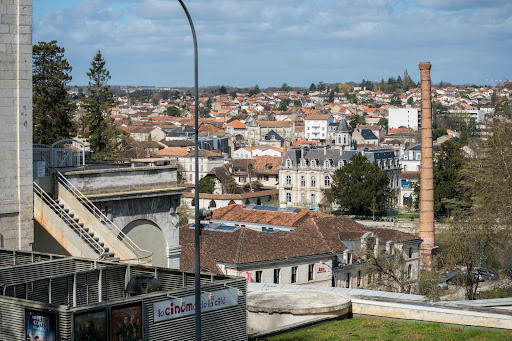 A sea of slanted rooftops form the skyline of Angoulême, France - depicted in Wes Anderson's 'The French Dispatch' as the town of Ennui-sur-Blasé.

“Certainly the loudest artist voice of his generation.”

These were the words of fictional writer JKL Berenson (played by Tilda Swinton), one of the leads in Wes Anderson’s newest film, The French Dispatch, a work of fiction heavily based on the golden age of The New Yorker magazine. They could just as easily describe Anderson himself, though, as he is one of the most unique and stylistic directors working today. Delara Moussavi ’22 said, “With how big franchise films are now, I really respect what he [Anderson] is trying to do.”

All of Wes Anderson’s films are a testament to the kinds of worlds artists can create when given free reign. Andrew Edelman ’22 said, “There’s a kind of godlike power that directors have to shape and alter the world’s their movies inhabit. And Wes Anderson uses that power to create a sort of in-between world that isn’t quite fantastical, but is certainly not realistic.”

The thing is, sometimes that bold style can be a curse, and The French Dispatch ends up trying — with moderate success — to juggle style and overindulgence.

Unlike most of Anderson’s films, which follow a more linear story, The French Dispatch is formatted as an anthology of stories, each from the perspective of a different writer for the (mostly) fictional titular newspaper, The French Dispatch. They are tied together by a prologue and epilogue which centers around the passing of the newspaper’s founder and editor-in-chief, Arthur Howitzer Jr. (Bill Murray), based on The New Yorker co-founder Harold Ross.

The first piece comes from the perspective of J.K.L. Berensen and is framed as a spotlight of Moses Rosenthal, an imprisoned painter that has unintentionally made a name for himself through abstract depictions of his muse, a prison guard named Simone (Léa Seydoux). This vignette winds up being both entertaining and aesthetically gorgeous, in large part thanks to its ensemble of characters, namely Rosenthal, Simone, and shady art appraiser Julien Cadazio (Adrien Brody), who contribute to a funny and satisfying story.

There are hints of a wider issue, however. While the characters are entertaining, there isn’t enough time to become invested in them or really see their development. This results in important characters feeling flat or annoying as the film enters its weaker second story.

The aforementioned second act follows another journalist from The French Dispatch, Lucinda Krementz (Frances McDormand), and as she follows a teenager named Zeffirelli (Timothee Chalamet), who leads a group of young revolutionaries.

Where the first vignette is Anderson’s take on the tropes of the tortured artist and the muse, the second vignette attempts to put a spin on the archetypal French philosopher and young revolutionary. The script never really knows whether it wants to romanticize or satirize these ideas, though, which creates an awkward situation where characters end up feeling annoying and predictable instead of larger-than-life but flawed.

Part of this has to do with Ms. Krementz’s narration, which is tasked with giving a mature perspective to contrast the naïveté of the young revolutionaries. While interesting on paper, the movie never properly resolves this dynamic or makes much of a statement on it, other than reiterating the archetypes it started from.

The dialogue also comes across as an attempt to poke fun at these characters through satirical levels of pretentiousness and wordiness. This is exemplified when two of them engage in a heated debate over the morality of military desertion, only for another character, having just deserted the military, to enter the room. They all immediately drop the debate to applaud, thus averting any kind of actual dilemma with a jarring right turn that almost seems like the script trying to make fun of the youth’s self-righteousness.

Instead of doubling down on this, the film tries to simultaneously frame them as legitimate geniuses on a noble journey. It seems like the intention was to find a nuanced middle ground, but there just isn’t enough time given to endear the viewer to these characters, so the result is around 30 minutes stuck with annoying ensemble that’s constantly being propped up by the film’s world.

What is truly aggravating about this section is that everything seems so tightly orchestrated, as if it is going to lengths to build up Anderson’s statement on youth and ambition, only for there to be no point at all.

The final vignette follows another expatriate journalist and another member of The French Dispatch, Roebuck Wright (Jeffrey Wright), based on a mix of James Baldwin and The New Yorker writer A.J. Liebling. Here, Wright is on a mission to interview the head chef of the city’s police commissioner. When the commissioner’s son is kidnapped, Wright’s profile quickly transforms into more of a news story covering the frantic rescue effort.

Throughout this final story, the script finds a better balance between humor and poignant commentary. Of the three main journalists featured, Wright is given the most time for character development, largely helped by the fact that the entire story is formatted as visual accompaniment for an interview with the journalist.

Wright’s adventure has a frantic pace that flaunts Wes Anderson’s creative directing, with everything from black and white segments to animated sections.

There are a few moments when the film tries to overtly characterize Wright as a parallel to Baldwin, and this is where the whole story falls flat. The goofy kidnapping premise is such a sharp contrast to Baldwin’s body of work, which is best well known for discussing issues like race, class, and sexuality, that it feels jarring and half-baked.

Despite this, the comparisons to A.J. Liebling, specifically his pieces from The New Yorker on food (which you can, and should, read here) make for a solid homage capturing the human element of the writer’s profiles of French restaurateurs. The film succeeds more when it fondly remembers The New Yorker’s history than when it tries to make a political or philosophical point.

Between The French Dispatch’s start and end, which quickly chronicles the context surrounding the newspaper’s final issue, there are also references to legendary journalists like Joseph Mitchell (a favorite writer amongst many journalism students writing for The Science Survey, fictionalized by Owen Wilson as Herbsaint Sazerac) which add even more character to the movie.

The question of whether going to the theater to see The French Dispatch is worth it comes down to the Omicron variant, and if you consider yourself a fan of Anderson’s work, and specifically what aspects of Anderson’s work that you like. While you are not likely to be disappointed by the performances, directing, or cinematography, for many, there is going to be a lot to overlook in the writing.

If you just had an interest in the movie’s premise, you are probably better off with The New Yorker’s stockpile of fantastic and free articles. And if you just enjoyed The Grand Budapest Hotel, you should consider finding some of the filmmaker’s fantastic previous output on streaming.

If you do, however, have a serious itch for the pronounced style of Anderson and a feeling of singular creative vision that much of Hollywood is currently missing, you should give The French Dispatch a try. There is certainly a lot to like, and I would not be surprised if there are people out there who count this among their favorites of Anderson’s output. It just takes a more specific taste. With the current circumstances around theaters, all but the most devoted Anderson disciples may want to err on the side of caution and watch it via streaming from home, as the movie is now available via streaming. To watch The French Dispatch via streaming at home, it is currently available on Amazon Prime (subscription or rental fee required), HERE.

When all is said and done, it is still hard not to admire Anderson’s ability to continue to succeed in the current Hollywood climate, and with so many circumstances working against him.
Sometimes bold style can be a curse, and The French Dispatch ends up trying — with moderate success — to juggle style and overindulgence.