A Dive Into the Fiery Depths of ‘Hellbound’

An exploration of the six episode Korean drama based on a famous webtoon. 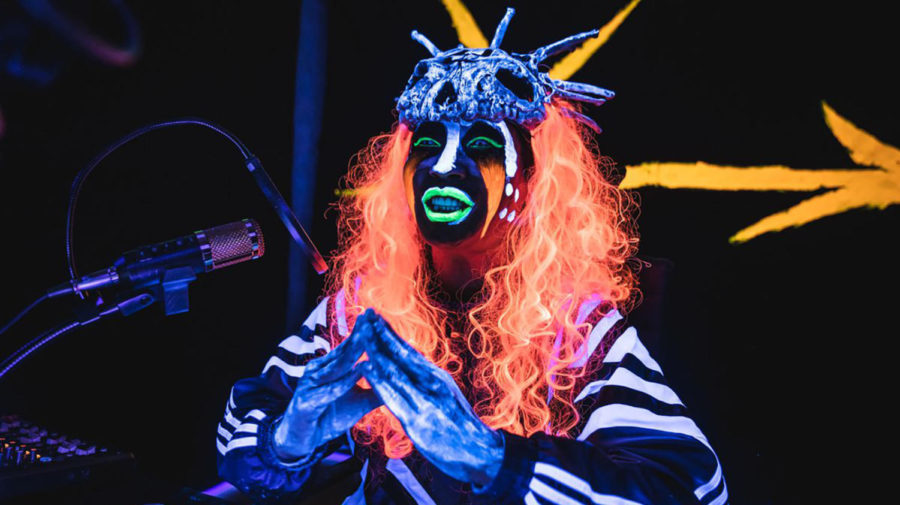 A still from ‘Hellbound’ shows a creepily disguised member of the Arrowheads in neon devilish wear, portraying the desensitization of evil in modern society.

As Korean movies and TV shows have been gaining popularity around the world with their elaborate plots, detailed visuals, and influential casts, people are constantly looking forward to new Korean releases. The K-drama ‘Hellbound’ stands out among the rest with a thrillingly ominous six episode odyssey that has been acclaimed as one of the newest installments on Netflix.

The show’s plot focuses on the unlucky victims of goosebump-inducing prophecies given directly from angels of doom, as well as religious zealots that take on the belief that the prophecies are a punishment as a result of their sins.

When I first read the cast list, I immediately knew that viewers were in for the next blockbuster Korean Netflix show. The cast ranges from seasoned actors like Kim Hyun Joo and Yoo Ah In, to rising stars like Ryu Kyung Soo and Lee Re, all of whom could lead this ‘hellish’ show to gates of heaven with their acting skills alone.

When writing the script, Director Yeon Sang Ho had one person in mind for the lead — Yoo Ah In. Yoo has played a variety of roles, each one executed to perfection, from being a member of a cartel that kidnaps a young girl to an extremist ruler as the Crown Prince of Korea. Yoo happily accepted his role as a deranged cult leader, as he was immediately interested by the script’s pitch — journeying to the fiery depths of hell.

The cast does an excellent job at executing their characters. Yoo Ah In’s character, Jeong Jinsu, is a charismatic religious leader who truly believes that righteousness in human beings is the only way to not be condemned to hell. His understated rivals are Min Hye Jin (played by Kim Hyun Joo), a fiery lawyer who represents everyone Jinsu’s New Hope group has harmed, and the solemn yet thorough police investigator Jin Kyung Hoon (played by Yang Ik Jun).

Throughout this complicated yet thorough tale, all of the main characters’ lives seem to intertwine, as the characters cannot seem to get away from each other, furthering their conflict and mutual contempt for each other.

On the surface, the drama stems from the battle between divine evil and good. But on a deeper level, the show’s six episodes go past doom and prophecies, and become a nuanced commentary on class hierarchies and how to cope with the daily pressures of our society.

Yeon focuses on the sins of the condemned, but also highlights their social class. Many of the condemned, as well as the main characters, come from impoverished backgrounds, having to fight for what they have.

However, the director sets them apart by showing us how each character deals with the conditions they were born into. While some use it as an excuse to not improve themselves, others use it to further themselves and achieve their ambitions, by adopting a “if they can do it, I can too” mentality.

What I really admired about the show is the little tidbits revealed about the characters, and small comments made by the characters, that seem trivial — until we realize that they reveal Yeon’s view towards society and technology with subtlety, through comments by characters that might seem innocuous at first.

For instance, Yeon’s view on society’s reliance on media and technology is displayed, as Yang’s character scoffs in disapproval at his partner upon finding out that he completes research using a sketchy online encyclopedia. We continue to see the media play a role in the story as it enables phenomena such as fake news to exist and to thrive.

Even in the midst of serious themes, I admired the plot’s ability to mix in humor. In one scene, we see the crazed members of the Arrowhead group live streaming, as comments of ‘haha’ and ‘lols’ flood the screen. However, they cut to a video of members holding a hostage to make him confess to his sins, once again showing the show’s morally gray outlook towards good and evil.

Yeon uses these young adults to show the new generation’s emerging desensitization to violence and willingness to “hop on the bandwagon,” as viewers comment things such as “what’s going on,” “lol,” and “this is making one hell of a show.”

CGI and visual effects are used liberally to depict extraterrestrial beings and, in my opinion, this was one aspect that ‘Hellbound” did not execute perfectly. With spirits that resemble Casper the Friendly Ghost and the magical mirror from Snow White, I personally found the effects to be cheesy. Others may disagree, as the effects seem to be less realistic on purpose when considering the large budget for the show. Emily Piao ’22 seems to disagree with my opinion, as she stated, “I personally liked the CGI in the show even though it was obviously fake, because it reminded me of the webtoon that the show was originally based upon.”

All points good and bad aside, I will say that if you are a fan of fast paced thrillers, ‘Hellbound’ may not be the show for you. When asked what her favorite or least favorite aspect of the show was, Jolly Zheng ’22 said, “I typically enjoy watching fast paced shows, to the extent where I watch them at 1.5x speed so it goes by faster. In my opinion, I thought that the plot and the show progresses kind of slowly, but I am sure others love this slow paced progression! It was great nonetheless.”

I understand that many fans of ‘Squid Game’ might tune into this show looking for more of the same, but the show is almost entirely different from its spiritual predecessor, even if both shows discuss the deterioration of society. ‘Hellbound’ is much slower paced and focuses less on the antagonists of the story and more on the victims.

‘Hellbound’ has reached Netflix’s top 10 shows in many countries all over the world with its release, and I completely understand why. It tries to make us think about our current lives and what happens afterwards, and it forces us to look back on our actions and ask, just as Yang Ik Jun’s character did, “Is that truly righteous and just?”

“Is that truly righteous and just?”