The Allure of Squid Game

An analysis of the viral Netflix hit, 'Squid Game,' and why it has become an overnight sensation. 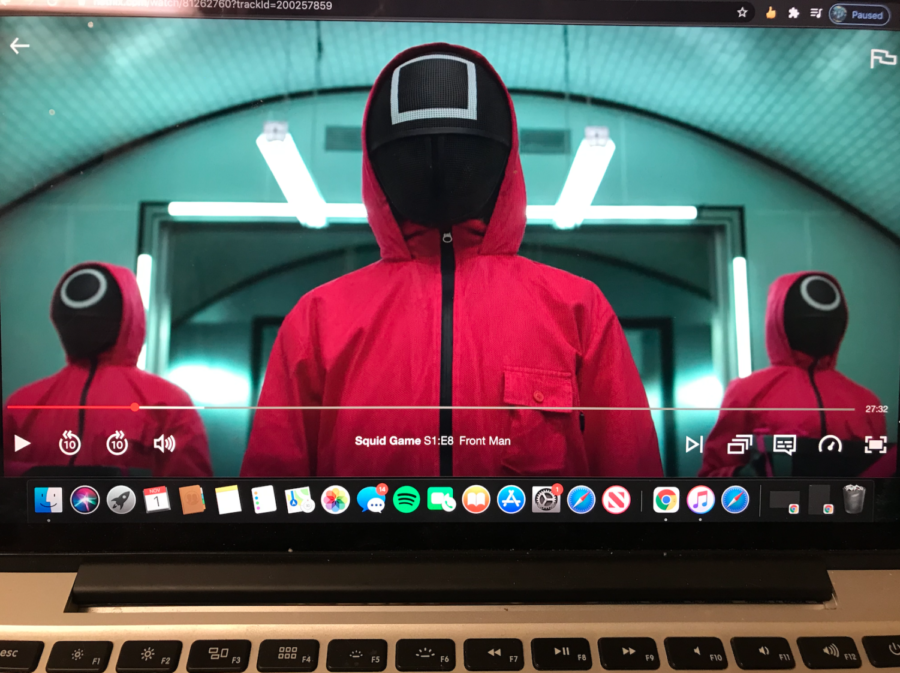 Here is the signature look of competitors in 'Squid Game,' part of the show's aesthetic appeal.

Images of candy-colored staircases, giant playgrounds, and people in identical suits and masks have been circulating around social media platforms since the beginning of this fall. The words ‘Squid Game’ have been uttered frequently, encouraging many people to watch the new show on Netflix.

Why are there 62 million people, and counting, globally, who are so captivated by this survival show? Aesthetics may be a large reason, but is that all it takes to maintain a viewer’s interest for 485 minutes?

“What maintained my interest was the deeply moving emotional aspect of the show. I feel like in some ways that I kept on watching ‘Squid Game’ because I saw my own conflicts in any and all of their conflicts,” said Felicia Jennings-Brown, ’23.

What is Squid Game?

Squid Game, a show that may have initially been written off as ‘just another survival show,’ instead takes a new spin on the survival concept. The show follows seven poverty-stricken people who desperately need to turn their lives around. Writer, creator, director and producer Hwang Dong-hyuk makes us empathize with, yet also dislike, our main characters, by showing us their backgrounds, their flaws, and how they hit rock bottom.

What is the show all about?

Among the 456 players, the countless soldiers, the Front Man, and many more characters, the show takes us through the perspectives of eight people: Seong Gi-Hun, a man with gambling and family problems; Cho Sang-woo, a man who committed fraud and is millions of won (the currency of South Korea) in debt; Kang Sae-byeok, a refugee from North Korea who turned to a life of crime to save her family; Abdul Ali, an illegal immigrant from Pakistan who came to South Korea with his family for a better life but instead got taken advantage of; Player 01, who is dying from a brain tumor; Jang Deok-su, a gambling addict and gangster who is running from his crime boss; Han Mi-nyeo, a woman whom we do not know much about, but who is incredibly intent on doing whatever it takes to survive; and Detective Hwang Jun-ho, a police officer intent on finding out what happened to his missing brother.

Throughout the show, we witness these characters struggle. While some stoop to new lows, others still maintain a form of “virtue.” All 456 players have virtually no choice but to play this game in order to get ahead, or go back to their previous lives filled with problems. The creators of this game intentionally picked players with crippling debt and no other ways out to fix their life — that is, unless they win the game and receive the millions they so desperately need.

Eye Catching Uniforms? Or Something More?

The eye-catching uniforms of both the players and the soldiers may have more to say than what meets the eye. Could it be a way to unify these people or to diminish their individualities?  When asked about the players in the game, Farhan Sreejan ’23 said, “It seems akin to something that lab rats or test subjects would wear, which falls in line with this sort of theme that they are just racehorses.”

When asked about the soldiers, Sreejan said, “In terms of their uniforms….it tells a lot about anonymity and how those who are in power or maybe those carrying out injustices refuse to be held accountable.”

While the uniforms were in part an effort to attract viewers’ attention, there were definitely larger meanings that fans were able to catch.

The Battle of Morals Versus Survival

Even in a game of survival, there are still characters who try to uphold their morality. We see them try to stick to morals, trust in one another, and hope for humanity above anything else. Gi-Hun is a friendly and trusting person even when things go wrong for him; he stays loyal to his friends. He is the glue of our main characters’ team. Ali is a kind and polite person who just wants to feel included. When he finds his friends, he decides he will help protect them as much as he can, whereas, characters such as Sangwoo or Deok-su, or Mi-nyeo, do absolutely anything to win. They aren’t above betrayal or deceit.

This show parallels and connects to the real world, especially through the characters’ actions. Squid Game, at its root, is a survival show, so we see characters acting out of a need for survival. Humans have a tendency to be greedy, which is showcased broadly throughout the show. “Although we all think we’re not greedy, we would’ve done the same as the 456 players if we were in the same situation. We like taking the easy way out,” said Krittika Chowdhury, ’23. Every action the characters take, no matter how pure or with good intentions, all lead back to a desire for self preservation. It shows a connection to the real world, because deep down, everyone wants to be better than everyone else.

Squid Game also portrays a battle between “good versus evil” or “morals versus survival” in an effort to reinforce the main themes of Squid Game: a criticism of our capitalistic society as well as what it means to be human. Although both themes are quite vague and general, producer Hwang Dong-hyuk manages to tackle the good and bad of how humans try to survive in a world.

“The portrayal of morals versus survival is that you have to lose your morals in order to survive in a capitalist society,” said Fateema Akter ’23. While some viewers noticed the cynical message of the show, others also chose to see the good in characters, and how humanity will prevail even in the hardest of times. “Although the characters’ suits were designed so they would have little extra clothing, Gi Hun offers one of his few pieces of apparel just to help someone out. I think that moment was very beautiful and holistically ties into the theme of the apparel being directly related to how people of a lower economic class are treated,” Sreejan said.

The fight between morality and survival is evidently what makes us human.

The Incredible Feat of Maintaining the Interest of Millions

As mentioned earlier, many people were attracted to Squid Game initially because of the aesthetic of both the setting and the uniforms, which were clearly and loudly advertised. But there had to be more, in order for 62 million viewers to keep their attention on this show.

The creator and producer helped us to learn the backgrounds of characters, no matter how distasteful and pathetic they seemed. We quietly found ourselves feeling sympathy and rooting for our personal favorites, as we now knew their struggle and their hardships, and we wanted better for them.

Using suspense as a major hook, we were unable to take our eyes off the screen, as we saw these very relatable characters struggle with their inner selves and their inner desires.

Hwang Dong-hyuk has given us real and relatable internal conflicts, knowing that Squid Game would eventually be understood on a deeper level.

The Humble Beginnings of This Viral Hit

Squid Game has been in the works for over a decade. Creator and producer Hwang Dong-hyuk wrote a beautiful script with twists and turns packed with friendships and heart-wrenching betrayals. He himself was in a financial crisis when he got the inspiration for this story.

Once Netflix accepted Squid Game in 2018, Dong-hyuk was able to put into motion the vision he had all along, and we can now see how well that has been received, as Squid Game is one of Netflix’s most watched shows in 94 countries worldwide.
Hwang Dong-hyuk has given us real and relatable internal conflicts, knowing that Squid Game would eventually be understood on a deeper level.