A New Era For the Weekly Livestreamed Show, ‘Critical Role’ 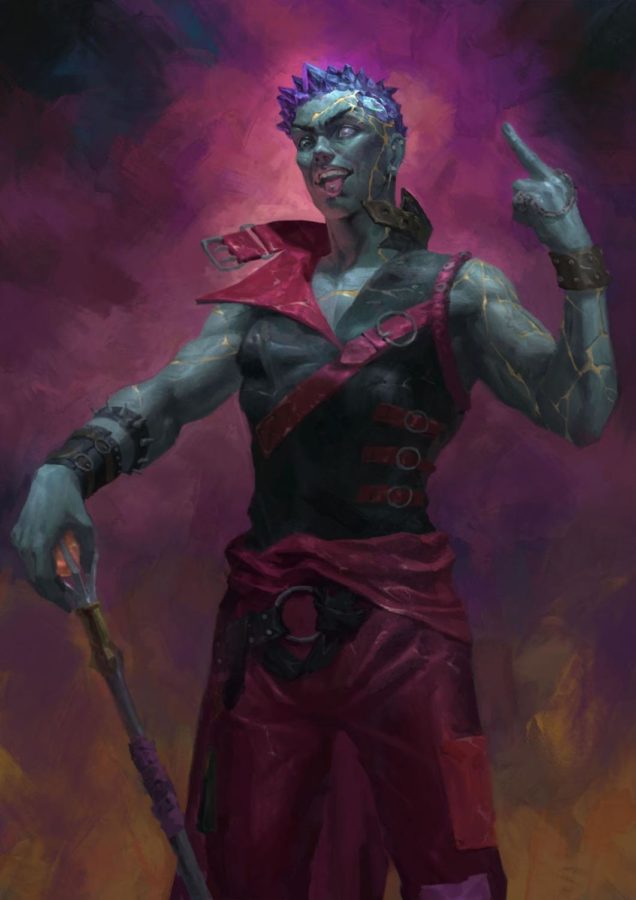 “Ashton Greymoore” is an Earth Genasi barbarian played by Talisen Jaffe in Critical Role’s third campaign. His appearance and get-up is a pun on ‘punk rock’ and he acts just as his appearance would suggest.

It’s a new era for the famous weekly livestreamed show, ‘Critical Role.’ After three years and six months of airing weekly shows, their second season of their popular game of ‘Dungeons and Dragons’ has ended, and the production team is now beginning anew.

What is ‘Critical Role’? Starting in 2015, a cast of well-known voice actors started to livestream their home games of the popular tabletop game, ‘Dungeons & Dragons.’

Building off of the interest in the popular podcast, ‘The Adventure Zone,’ started by the McElroy family, the creators of ‘Critical Role’ used their livestreamed show as a means of showing off their ‘Dungeons & Dragons’ game played at home. The group created ‘Critical Role,’ an interactive experience, where professional actors play characters of their own design and improvise reactions to an ongoing story.

Now, the show still continues to grow and outperform expectations; the Twitch stream of episode three peaked at 212,916 concurrent viewers with an average of 167,543 viewers.

Started by Matthew Mercer, a voice actor known for his roles in game franchises such as Resident Evil, Fire Emblem, and Overwatch, ‘Critical Role’ explores the fictional world of Exandria.

What may surprise you is that Exandria doesn’t come from a book or a team of writers — it was created and written solely by Mercer himself. The lore itself is vast, covering the lore of the two previous seasons and the history of Exandria itself.

What makes the show so special is players equally get to follow the story and immerse themselves into this imaginative world and plot. In their past two seasons (commonly known as campaigns), the cast explored the continents of Tal’dorei and Wildemount, each with their own noble quests.

Now, Mercer starts this new game in a continent known as Marquet, a previously explored yet still unknown part of the world as a whole. It mixes two main aspects, jungle and automation, a striking difference to the more urban locations of Tal’dorei and the forests of Wildemount.

They start in the city of Jrusar within the Oderan Wilds, which is described by Mercer in the show as: “From the central jungle floor rises five, tower-like mountains that reach for the heavens, where upon their rocky exterior numerous streets and urban districts have been carved into them to form a singular city connected by bridge and cable.”

When the actual characters are introduced, viewers look into the lives of the sorceress “Imogen” and undead warlock “Launda,” played by voice actresses Laura Bailey and Marisha Ray, respectively. The contrast between Imogen’s bright purple hair and southern charm and Launda’s gothic creepy get-up makes one think of what roles each player might choose to put their characters in.

Next, we’re introduced to the barbarian “Ashton ” and the cleric “Fresh Cut Grass,” played by voice actors Talisen Jaffe and Sam Riegel respectively. Ashton’s identity is akin to a punk rock enthusiast. On the other hand, Fresh Cut Grass (or FCG for short) is an ‘Aeormaton,’ a small robot construct that acts as the party healer and protector.

Our final batch of characters are Ashley Johnson’s druid named“Fearne,” Liam O’Brian’s fighter  “Orym,” and special guest Robbie Daymond’s bard, “Dorian.” These three characters have been previously featured in the ‘Critical Role’ franchise. They were featured in “Exandria Unlimited,” a show that ran over the course of the summer while the main show took a hiatus after the end of Campaign Two.

Exandria Unlimited has somewhat mixed reviews. While the players themselves are all high-quality voice actors, the story was not up to par with character interactions. It felt rushed and confusing, with many plot holes and no real conclusion after hours of content.

For many viewers, the introduction of two previous characters from a messy subsection of the show put a bad taste in their mouth. Most people were hoping for new, never-before seen characters from all of the actors.

Although we have not seen much from Fearne or Orym yet, having a coherent plot and more characters to have permanent lasting interactions with will likely strengthen their development and allow viewers to grow attached to them.

The first episode began with each character beginning their day, similarly done in the past season, many of the characters paired up to have some past relations. The group eventually meets up when animated cutlery begins to wreak havoc around the surrounding area, giving the cast an opportunity to show out their new toys and abilities in combat.

I have left one cast member out of the spotlight. Travis Willingham, the last member of the main cast, is playing a temporary character for a few episodes. Reprising one of his old characters, “Sir Bertrand Bell,” Willingham has begun the campaign as a guide for the setting rather than a true character. As of now, Bertrand is slightly stronger than the rest of the group  in terms of power.
It’s a new era for the famous weekly livestreamed show, ‘Critical Role.’ After three years and six months of airing weekly shows, their second season of their popular game of ‘Dungeons and Dragons’ has ended, and the production team is now beginning anew.