Marking the next phase of a highly-anticipated $160 million renovation project of their historic Gilded Age mansion, Frick Madison will house the institution’s collections, programs, and staff through 2022. 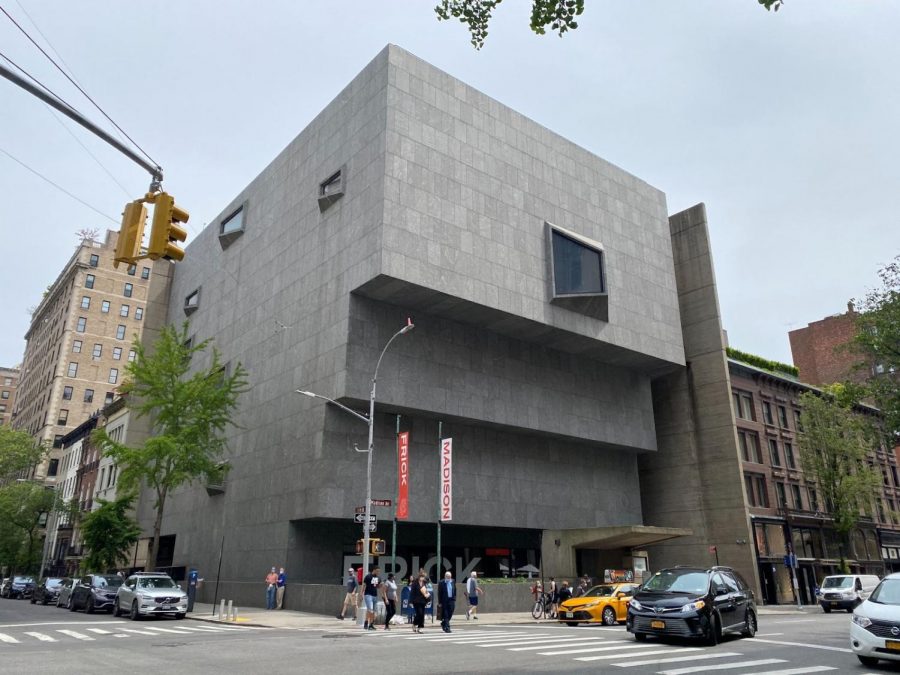 The new home of The Frick Collection in the modernist, brutalist Marcel Breuer-designed building standing at the Southeast corner of 75th Street and Madison Avenue in Manhattan.

Following a twelve-month hiatus, The Frick Collection has officially reopened in the Breuer Building as Frick Madison. Artwork from the permanent collection, featuring the likes of Rembrandt, Van Dyck, and Vermeer, is unprecedentedly on display organized chronologically, geographically, and by art medium.

Relocating to the former home of the Whitney Museum of American Art and the site of the Met Breuer, the Marcel Breuer-designed building located at 945 Madison Avenue marks the first time in which the collection is exhibited outside of its usual home. Frick Madison, spearheaded by Deputy Director and Peter Jay Sharp Chief Curator Xavier F. Salomon, along with Curator Aimee Ng, affords the museum a “blank slate” typical of contemporary art museums in which to display its art.

Against the backdrop of blank, gray walls, the Frick’s permanent collection is displayed without the surrounding opulence and luxury of the Henry Clay Frick House. Jean Barbet’s Angel sculpture stands just outside the elevators on the second floor, welcoming visitors to the museum as the first art piece they see; rather than being one of the final artworks seen, tucked away in the Garden Court of the Frick House. In addition, for the first time in its entirety, all eight Van Dyck portraits in The Frick Collection are displayed together flanked by works from Rembrandt and Vermeer, taking up a majority of the second floor. Perhaps most notably, Giovanni Bellini’s painting St. Francis in the Desert, The Frick Collection’s most viewed painting, hangs alone in its own room, as opposed to its usual place as the complement of the centerpiece above the mantle in the living hall of the mansion.

According to the press release announcing Frick Madison’s installation plan, “Through fresh juxtapositions we will present our masterpieces in a completely different light, revealing unexpected relationships between subjects, artists, and media,” Salomon states. “The opportunity to deconstruct and re-present our collection in this way offers an invaluable learning experience that will enrich our understanding and enjoyment of the collection while we are at Frick Madison.”

Away from the luxurious influences of Henry Clay Frick and choosing to focus on and highlight the art itself, the collection is now on display in an expressionless environment for the first time in history. The institution takes full advantage of its new venue, departing from traditional exhibitions and installations in order to create a fresh perspective on the masterpieces in its collection. With The Frick Collection traditionally exhibited to decorate the mansion according to the tastes of its infamous founder, Frick Madison uniquely organizes the collection by geographic region, time period, and media.

Still paying homage to its roots, however, Frick Madison’s carefully curated collection chooses to focus on pieces significant to or purchased by Henry Clay Frick himself. The first two floors of galleries, dedicated to European and Asian art, highlight pieces acquired later by the collection inspired by the steel magnate’s tastes. For instance, in the European and Asian Porcelain rooms, only one-third of the German and Chinese ceramics furnishing the North Wall were acquired by the patron. Instead, a majority of the exhibit was later acquired by his daughter, Helen Clay Frick, or recently donated in the past decade as the Frick transformed itself for the modern age.

Seven years since it was first announced in 2014, the Gilded Age mansion that typically houses the institution is undergoing a two-year-long expansion and renovation designed by Selldorf Architects. For the first time, the private second floor residence will be unveiled to the public along with new special exhibition spaces, increasing the museum’s total display space by 30%. The additional construction as well of a new education center and auditorium allows for The Frick Collection to reinvent itself as not only an art museum but as a cultural institution for the community.

While visitors are typically dazzled by the opulent decor and furniture in the Frick’s usual home, distracting their attention from the art, Frick Madison is utilizing the Breuer Building’s simplicity and minimalist design in order to highlight the individual pieces of art and gives patrons an idea of what to expect for the future of the collection. Employing an unprecedented approach to display their art in a temporary new home, it is only fitting in a building designed by Breuer, who famously stated, “I am as much interested in the smallest detail as in the whole structure.”

“I am as much interested in the smallest detail as in the whole structure,” Marcel Breuer famously stated.