Although life is slowly approaching a pre-COVID state of normal in the United States, The Met Gala unfortunately will not be returning on its regular annual date of the first Monday of May. Rather it will return in September 2021, with two themes, no less. 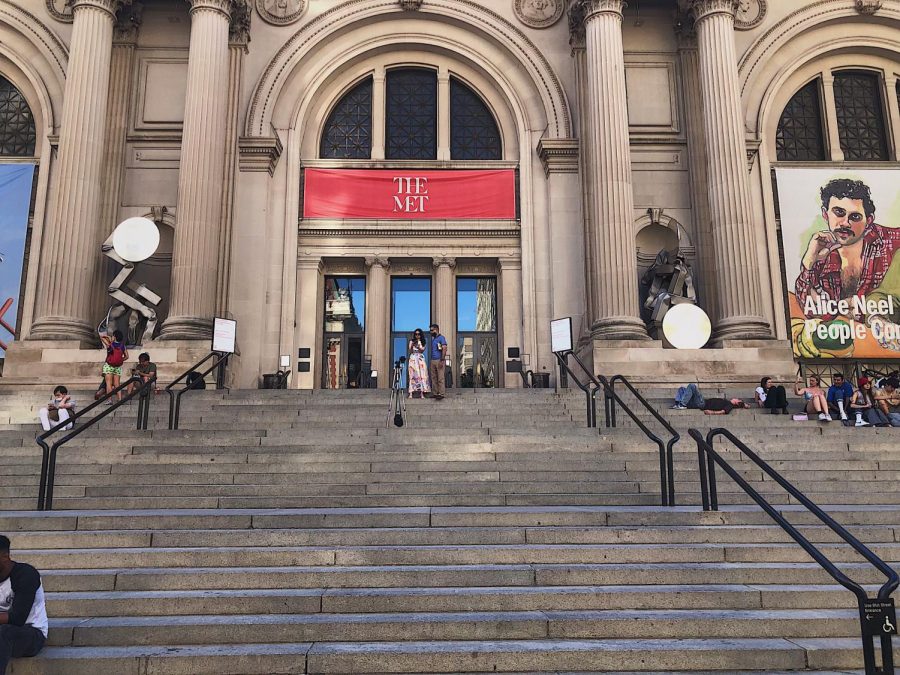 The steps of the Metropolitan Museum in the spring of 2021 are less busy than they were prior to the onset of the Coronavirus pandemic. On the first Monday of May, this exact area of the entrance to the museum would normally be decorated with a large white tent that would conceal the paparazzi and the celebrities who would be entering the highly anticipated Met Gala.

The first Monday of May is a day that is ingrained in the minds of fashion lovers, philanthropists, and celebrities alike. It is the date of the annual Met Gala, an event where celebrities dress according to a theme selected each year to fundraise for the Metropolitan Museum of Art’s Costume Institute.

According to the Vogue article ‘Everything You Need to Know About the History of the Met Gala,’ the very first Met Gala was held in 1948 by fashion publicist Elanor Lambert. As one of the world’s most glamorous and exclusive social events, the gala brings in socialites, designers, models, and celebrities from various fields and industries in order to celebrate the opening of the annual Costume Institute exhibition. The event, often referred to as “fashion’s biggest night out,” is arguably most known for the iconic looks and outfits that attendees wear. Some of the themes that it has revolved around in previous years include “Camp: Notes on Fashion” and “Heavenly Bodies: Fashion and the Catholic Imagination.” Nowadays, it is also a tradition  for fashion lovers and critics to reflect on the attire of these celebrities in the days following the event.

This year, however, due to COVID-19, the Met Gala has been postponed to September 13th, 2021. While this may be disappointing news to some, an upside to the delay is the proximity between the 2021 and 2022 Met Galas, for the latter is set to be held on May 2nd, 2022. What is so exciting about having these two Met Galas so close to each other is that they come with connecting themes: “In America: A Lexicon of Fashion” and “In America: An Anthology of Fashion.”

Now, you may be asking: What do these themes mean? And more importantly, what iconic outfits will they inspire? According to The Metropolitan Museum of Art’s Exhibition Overview, “Part one…will explore a modern vocabulary of American style emphasizing the expressive qualities of dress and deeper associations with issues of equity, diversity, and inclusion.” In other words, this year’s exhibition will focus on changes in American fashion from the 20th and 21st centuries. More specifically, it will convey how different emerging issues and societal changes alter American fashion and style over time. Going along with the time period of this theme, the gallery in which the exhibition will be displayed will feature “a fictional American home constructed of transparent walls that intersect and overlap.”

In addition to its prominent reputation as the “fashion world equivalent of the Oscars”  the publicity and attention that the Met Gala receives also comes from its long list of celebrity guests and attendees. As of this moment, it has been confirmed that Timothée Chalamet, Billie Eilish, Amanda Gorman, and Naomi Osaka will be co-chairing the gala. Furthermore, we can expect to see celebrities that have frequently attended in the past, such as actress Blake Lively as well as  artists Rihanna and Harry Styles. The honorary chairs this year will be Vogue Editor-In-Chief Anna Wintour, American fashion designer Tom Ford, and Instagram’s Adam Mosseri.

In comparison to other years, this one stands out, because of the double theme and the fact that it will honor the 75th anniversary of the event. While past themes such as ‘Heavenly Bodies’ and ‘Camp: Notes on Fashion’ have been more abstract, the two corresponding themes for this year’s and next year’s Met Gala will concentrate more on the shift in fashion from the past, rather than more inventive aspects of fashion and add an emphasis on American designers, specifically newer and more diverse ones.

The latter of the two corresponding themes is entitled ‘In America: An Anthology of Fashion.’ An article in W Magazine explained that this theme will focus on earlier American fashion styles, dating back to the 1600s. Whereas the 2021 Costume Institute exhibition will be modeled after a 20th-century American home, the 2022 exhibition will be displayed in a gallery inspired by a 19th-century parlor set.

This year’s double theme is revolutionary in many ways — and it is especially notable because of its take on the evolving American fashion around culture and emotions. Many are excited about seeing their favorite celebrity guests take on the challenge of fulfilling the theme of the gala each year, and it is even more thrilling to see how each public figure interprets these themes through fashion. The revival of this star-studded extravaganza will bring glamour and abstract takes on fashion to the screens, and many are anxiously awaiting when we get to see our favorite celebrities and designers embrace the themes of American fashion. With iconic looks and a long list of expected attendees, both evenings will truly be nights to remember.
While past themes such as ‘Heavenly Bodies’ and ‘Camp: Notes on Fashion’ have been more abstract, the two corresponding themes for this year’s and next year’s Met Gala will concentrate more on the shift in fashion from the past, rather than more inventive aspects of fashion and add an emphasis on American designers, specifically newer and more diverse ones.