A Mind-Wrenching Take On Dystopian America: A Review of Damon Lindelof’s ‘Watchmen’ 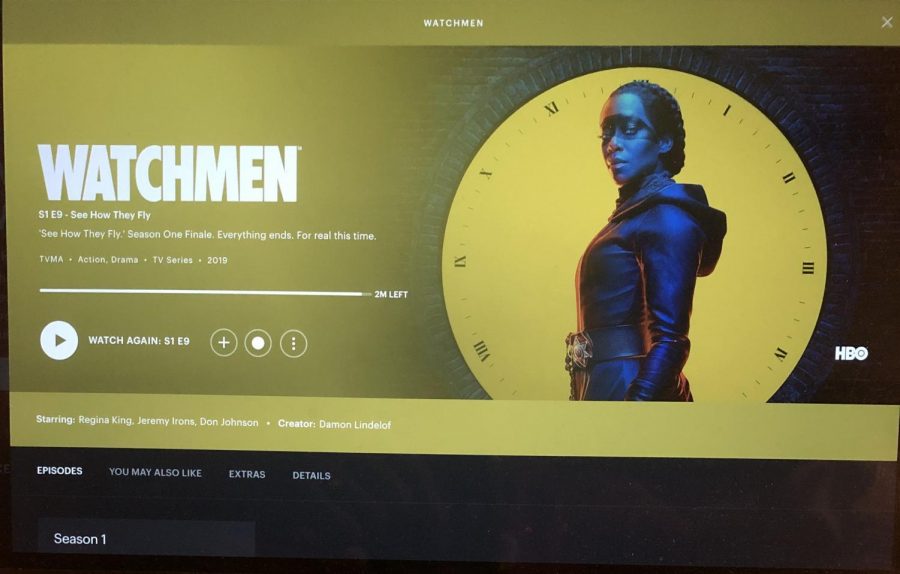 Considered one of the greatest graphic novel writers of the century, Alan Moore left his mark on the superhero world with Watchmen, a story that focuses on outlawed, masked heroes during the eccentric geopolitical climate of the Cold War.

The world of Watchmen soon got adapted into the DC universe and, like most superhero franchises, fans soon desired a motion picture version of the beloved graphic novel. However, Zack Snyder’s 2009 rendition of Watchmen did not live up to the billing, as the director changed important details and the film at best came off as a budgeted project. While a 65% rating on Rotten Tomatoes is not horrible, the renowned story deserved much more than it received.

It was not until HBO and esteemed screenwriter Damon Lindelof came along that Watchmen got the treatment it deserved. Lindelof, an esteemed writer known for The Leftovers and Lost, chose to create a series that picked up where Alan Moore left off, instead of trying to adapt the incredibly complex content within the graphic novel itself. While this did not please Alan Moore, who publicly renounced a sequel to his story, it did gain a large fan base. A professed ‘superfan’ of the show, Noah Getz ’21, explained his love for the show, by noting, “The show is just really well written. Plus I don’t think any show has ever continued a book instead of retelling it.”

Taking place in the modern-day, HBO’s Watchmen covers how the aftermath of the comics contributes to race relations and to daily life. The series revolves around the conflict between the police force and The Seventh Kavalry, a white supremacist organization paying homage to the right-wing symbol of the graphic novel, Rorschach, who famously wore a mask with a Rorschach inkblot on it. Preceding the events of the series, there was a terrorist attack called “The White Night,” in which The Seventh Kavalry raided the homes of police officers. One of the only survivors of “The White Night” was an officer named Angela Abar, our protagonist and also a masked hero.

The series begins with a flashback to the early 1900s with the Tulsa Massacre, a white supremacist terrorist attack targeted at an African-American community. We soon learn that during this time the police force was corrupt with a conspiracy called the Cyclops, which carried out acts of terrorism against people of color and helped white citizens retain their privilege. We see the legacy of this conspiracy and the Tulsa Massacre connect back to modern-day race relations.

With President Robert Redford in office, the famous actor turned politician serving as a liberal counterpart to Ronald Reagan, a big topic of white supremacist propaganda is anti-Redforations sentiments (“Redforations” are reparations given to African-Americans for slavery). The roles in this alternate America are also reversed, with the police being portrayed as the victims against the anti-government agenda of The Seventh Kavalry.

The show covers a lot of topics ranging from, of course, race, to also religion, pharmaceuticals, and mental health. From the first few episodes, we get the sense that there are a lot of moving parts and do not see how it all fits together. Yet, as the show progresses the puzzle pieces start to align and we see these themes come together.

The biggest difference between the graphic novel and the show is the major issue at hand. Alan Moore’s story revolved around the geopolitical catastrophe and mutually assured destruction that took place during the Cold War. The major topic in Lindelof’s rendition, as mentioned before, is modern-day race relations. Cyclops, as an organization, is an allegory as to how white supremacy has infiltrated our government and police systems.

In terms of religion, we are presented with many references to the Bible and to church. Dr. Manhattan and his powers present us with the idea of a God living among us. After being used by the U.S. to colonize Vietnam, he went off into hiding not wanting to interfere with human affairs anymore, almost elevating himself to the level of a deity. We then see him play God on a moon of Jupiter creating a fundamentally different form of life. Meanwhile, Cyclops headquarters is in a church, setting up a comparison between the ideas of classical religion and that of a deity created from a scientific disaster.

An important character to note in this series is Lady Trieu, owner and founder of multi-trillion dollar company Trieu Pharmaceuticals. The look into the functioning of this company symbolizes the evils of the pharmaceutical industry. Trieu’s complete apathy towards experimental ethics and her motives leave questions to the inner workings of the billionaire labs that produce our medications.

Characters like Trieu and Dr. Manhattan show us that the events that transpire in Watchmen are above the influence of the common citizen, yet it is those types of people who are affected the most. The aftermath of the world within these comics left many comic book characters with severe PTSD and we see those affected buy products to relieve their trauma in the show. The culture of fear and disempowerment in Watchmen’s America is evident in the mental health of its characters.

Aside from these themes, it is also the inclusion of small details like a hero named “Red Scare” working for the institution and the multitude of easter eggs linking back to the graphic novel that the show does best. The series covers the timeline both before and after the graphic novel, and as a result, bridging the gap with easter egg mentions of Watchmen characters in newspapers and the development of the police institution in the universe is one thing that certainly aids the show.

Overall, Damon Lindelof continues his track record of superb writing with the award-winning Watchmen. The show gives its own take on the dystopian political climate of America and makes us question the very morals on which we were raised. Both the graphic novel and the HBO limited series are masterpieces that everyone should experience for themselves.

To view Watchmen on Hulu (subscription required), click HERE.
“The show is just really well written. Plus I don’t think any show has ever continued a book instead of retelling it,” said Noah Getz ’21.