The Science Survey • May 1, 2021 • https://thesciencesurvey.com/arts-entertainment/2021/05/01/nomadland-and-chloe-zhaos-historic-win-at-the-golden-globe-awards/

The first Asian female director in history to win Best Director of a Motion Picture at the Golden Globe Awards, Chloe Zhao tells a heartwarming story of life, love, loss, and healing through her film, 'Nomadland.' 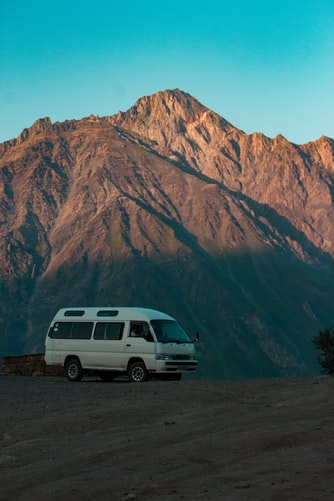 The intricate scenes created by the natural landscapes and personal stories in 'Nomadland' are powerful, gorgeous, and moving, sure to stick with viewers long after the final credits have finished rolling.

Recently, Chloe Zhao won Best Director – Motion Picture at the 2021 Golden Globe Awards for her film, Nomadland. As the first woman of Asian descent and only the second woman in history to win the award, people across the entertainment industry have been celebrating the news.

With the rise in hate crimes against Asian communities this past year and the shootings in Atlanta on March 16th, 2021, that resulted in the deaths of eight people, six of them Asian women, AAPI (Asian Americans and Pacific Islanders) have been living in fear of discrimination every day. Greater Asian and female representation in film and media is incredibly important and always applaudable when achieved, but has become even more crucial now.

Nomadland is a story of a sixty-something year old woman named Fern, who becomes a van-dweller and travels across the country after her husband’s death. At first glance, this story may not stand out against other movies about travel, but it actually touches deeply on many aspects of American life. Aissata Barry ’22 said, “I didn’t realize this until my second time watching the film, but there are so many topics that the film covers, and it’s so much more than just about Fern — it’s about unemployment, insufficient wages, the U.S. healthcare system, the U.S. retirement system, grief, and more.”

The film also sheds light on the lack of support for the elderly and the loneliness they often feel. A scene in which Fern’s friend Linda May reflects on the fact that she had worked all her life, but her social security benefits would not even cover her monthly rent, illustrates this issue.

Other people’s narratives also intertwined with Fern’s throughout the film. Real life van-dwellers like Bob Wells and the women who played Linda May and Swankie were able to tell their own personal stories through the film, and this made the portrayal of Fern’s experiences as she embarked on her journey more realistic.

Some parts of the film truly hit home. The little details, like when Swankie was giving away some of her old belongings and asked someone off screen to take good care of them because her grandma made them for her, made Nomadland incredibly real, engaging, and personal. Many people can relate to having important keepsakes from people they care about, so a scene like that one creates a direct and individual connection between the characters and the viewers. The story that Bob Wells told at the end of the movie about his son’s death made me tear up, and I later found out it was based off of his own experiences, which made the scene even more moving.

Before watching the movie, I expected to learn more about the lifestyle of van-dwelling and the mindsets and experiences of people who are closer to my parents’ generation than mine. During the film, I was surprised by how relatable a lot of their conversations were. Despite the fact that I grew up in a completely different time, given the rise of technology and globalization, the characters really showed that we all feel the same human emotions despite different ages and cultures.

There is a wistful feeling that permeates the entire film, and even now I remember the movie bringing out a strong sense of longing in me. Nomadland makes you think, question, laugh, and smile. It makes you wonder why we live the way we do, what kind of life we want to live going forward, and what we should place value on. The beautiful landscapes and honest acting genuinely immerse viewers into the story. Chloe Zhao’s work truly deserves its win, and it will bring inspiration to filmmakers of Asian descent all across the globe in a time where AAPI representation is especially important.

To watch Nomadland on Vudu (rental fee required for streaming), click HERE.
Aissata Barry ’22 said, “I didn’t realize this until my second time watching the film, but there are so many topics that the film covers and it’s so much more than just about Fern — it’s about unemployment, insufficient wages, the U.S. healthcare system, the U.S. retirement system, grief, and more.”