The Science Survey • May 1, 2021 • https://thesciencesurvey.com/arts-entertainment/2021/05/01/netflixs-amend-the-fight-for-america-a-celebration-of-the-revolutionary-power-of-the-14th-amendment/

Netflix’s ‘Amend: The Fight For America’ — A Celebration of the Revolutionary Power of the 14th Amendment

In a documentary series that is a creative mixture of documentary, monologues, and animations, Will Smith is able to recount the story of America by conducting an in-depth dive into the history of the 14th Amendment. 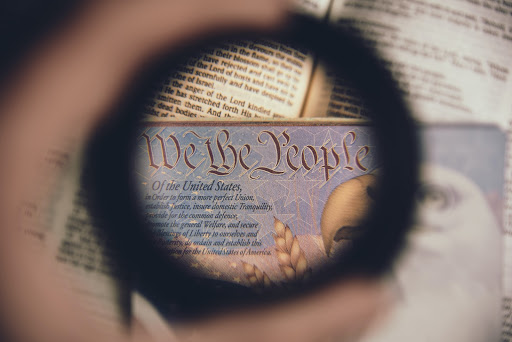 The Netflix limited docuseries 'Amend: The Fight for America' thoroughly examines the radical shifts brought about by the 14th Amendment.

“What do you think about when you think of America? What words come to mind? Justice? Freedom? Equality? What about citizenship?”

Will Smith asks these questions to the tune of ‘This Land Is Our Land’ at the beginning of the new Netflix limited docuseries ‘Amend: The Fight for America.’ After planting these questions in his viewers’ minds, Smith, an executive producer of the series, attempts to provide an answer. His response lies in “our story” — the story of America —which he reveals by delving deep into the history of the 14th Amendment.

While the 14th Amendment has five sections, the Netflix documentary series mainly focuses on section one, which is composed of two sentences. The first sentence of section one, commonly referred to as the Citizenship Clause, reads as follows: “All persons born or naturalized in the United States, and subject to the jurisdiction thereof, are citizens of the United States and of the State wherein they reside.” This sentence alone drastically changed the meaning of citizenship in America.

Prior to 1868, the year the 14th amendment was ratified, Black Americans were not seen as citizens in the eyes of the law. They, therefore, did not have the protections that being a U.S. citizen entails. When the amendment was adopted, however, the Citizenship Clause made it so that a person simply had to be born in the U.S. to have the rights citizenship provided.

The second and final sentence of section one also issued radical change to U.S. society. The second sentence, known as the Due Process Clause, provided citizens “equal protection of the laws.” This was revolutionary as it meant that, theoretically, Black Americans, who were now citizens because of the Citizenship Clause, had the same rights and protections as white Americans.

With this approach to examining the 14th Amendment, the series covers a significant portion of American history. The show’s format also encourages audience members who view movements like the Abolitionist Movement, the Civil Rights Movement, the Women’s Liberation Movement, and the Gay Rights Movement as disparate to realize just how interconnected they all are.

Take episode one and episode five as an example. Episode one, “Citizen,” explores Black Americans’ fight for citizenship in the 19th century and how that fight led to the formation of the 14th Amendment in 1868. In contrast, the 5th episode, “Love,” explores how the 14th Amendment was used to legalize gay marriage and is largely focused on the 1960s through the 2010s. While the movements and time periods may seem disconnected, they are linked through the 14th Amendment and both are essential when considering the story of America.

In addition to its unique take when examining the 14th Amendment, the documentary series finds strength in its accessibility. Throughout the show, historians break down big ideas like the Lost Cause ideology, privileges (freedoms) and immunities (protections), and landmark cases like Roe v. Wade and Obergefell v. Hodges, so that everything is understandable. Anyone can take something away after watching an episode.

‘Amend: The Fight for America’s’ mixed media art style also makes it very engaging. To tell the story of the 14th Amendment, the show relies on a blend of videos and photos from the past and the present, animations, monologues from celebrities such as Mahershala Ali and Samira Wiley, portraying historical figures like Fredrick Douglass and Pauli Murray, commentary from experts and activists, and a great soundtrack.

In addition to giving life to the documentary series, the mixed media art style of the documentary helps emphasize the connection between America’s past and the nation’s present. Videos of present-day events mixed in with pictures of the past tie together our nation’s history with our contemporary society which reinforces a point the series seeks to make: we all have a responsibility to live out the promise of the 14th Amendment by acting in just and moral ways. Viewers leave the documentary series encouraged to ensure that the 14th Amendment is more than just a promise of equality that was made but never kept.

To watch ‘Amend: The Fight for America’ on Netflix (subscription required), click HERE.
Videos of present-day events mixed in with pictures of the past tie together our nation’s history with our contemporary society which reinforces a point the documentary series seeks to make: we all have a responsibility to live out the promise of the 14th Amendment by acting in just and moral ways.