Too Much Freedom? Coping With the Explosion of Streaming

The proliferation of streaming services as the dominant mode of consuming television and movies has disrupted the reign of Netflix -- and the price of streaming has never been higher. 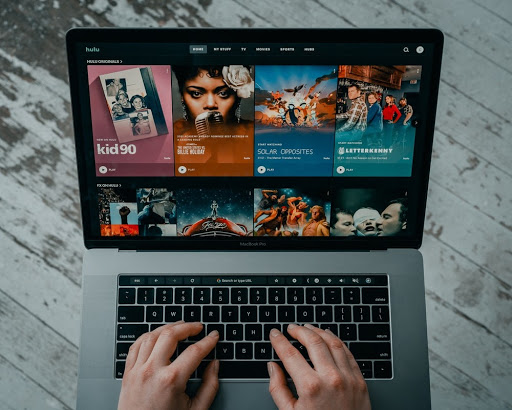 A slew of new exclusive shows fill the Hulu homepage, accessed via laptop.

Everyone needs an escape from the complexities of life every once in a while, especially during the Coronavirus pandemic. There, at the intersection of stress and fatigue, the television waits with open arms.

It almost sounds too good to be true, and as it turns out, it was. For the past decade, streaming services have overwhelmingly dominated the entertainment landscape because of the unmatched convenience of having thousands of shows and movies in one place that they offer. Gradually, though, the Netflix-Hulu dichotomy of the early 2010s has morphed into a maze of subscriptions and exclusives to the point where queuing up a show feels a little too much like a chore.

“I don’t like all the new streaming services, as they take away from the money you were saving when it was just Netflix and Hulu. It’s also very frustrating when you want to watch a movie, and it’s only available on one of the newest services,” said Eli Greenberg ’22.

There are currently more than 300 different streaming services available in the United States alone, which raises the question,“What makes this good enough to justify a monthly subscription when I already have Netflix?” The answer is always exclusive content. The issue is that every time a new streaming service is birthed into existence, the market itself becomes more decentralized — those exclusives are not just new material, in many cases, they are shows being taken off of older services to justify an additional monthly fee.

Unfortunately, this is a fact of life. The new generation of streaming services is not going anywhere, at least not in the foreseeable future. Instead, the big question is how to grapple with the suffocating array of options you are presented with every time you hit the power button on your remote.

The most popular services in the United States last year were the old guard of Netflix and Hulu, as well as the comparably newer Disney+. Netflix continues to offer the widest selection of original series, with massive hits like The Crown and Cobra Kai receiving new seasons and consistent huge releases like Bridgerton and The Queen’s Gambit expanding the catalog further. If your aim is to get access to these exclusive programs in addition to a formidable library of third-party shows, Netflix is the best option.

Hulu, while having major exclusives (think The Handmaid’s Tale), is best when your goal is staying up to date with series airing on other networks. New episodes will generally be available on Hulu as soon as a day after the original airing, whereas on Netflix, for the most part, they will not be added until the show’s next season starts.

At this point, things get more complicated.

The most popular of the new streaming services in the United States in 2020 were Disney+, HBO Max, and Tubi. Disney+ is more specialized in that it is based on making Disney properties readily available. For fans of franchises like Star Wars and Marvel, there is a wealth of both legacy and original programming. However, other than that, the variety of Disney+ is beaten by Netflix, which still boasts more shows overall and a larger range of exclusives from which to choose.

HBO Max has entered the equation with a very impressive catalog, mostly coming from Warner Bros. properties, alongside past HBO originals. There are also exclusives, including The Snyder Cut of the 2017 Justice League film, and plans for at least 50 new series starting in 2021. While the lack of a fast-forward feature could be frustrating, HBO Max’s library stands on its own by leaning on exclusives, even if it cannot match Netflix in quantity. Once again, how much you get out of HBO max is tied more to what specific shows/genres you are looking for than the sheer numbers.

Finally, Tubi, which launched in early-to-mid 2014, has accumulated over 33 million users. While it brings fewer exclusives to the table, Tubi has a large collection of old shows and movies, but most importantly, it is completely free. You can make an account in about thirty seconds, so out of every streaming service available, it is easily the biggest deal. This is not an act of charity — there are still advertisements, and you are more likely to find obscure properties like Shark Exorcist than blockbusters like The Mandalorian. However, I would still wholeheartedly recommend it, particularly if you are not looking to pay for another subscription.

The landscape of streaming services has evolved into a much more complicated and costly place than it was during the last decade. It is no longer about just subscribing to Netflix. Now, to really get the most out of your subscription, you must start by finding which shows and production companies are most interesting to you. Today, there is more great TV and more amazing movies available than ever before — there are just a few more hoops to jump through for you to access them.
The Netflix-Hulu dichotomy of the early 2010s has morphed into a maze of subscriptions and exclusives, to the point where queuing up a show feels a little more like a job than it should.