“They’re My Best Friend. I Swear.” A Look Into Parasocial Interaction

You seek fulfillment in fake relationships. What does this say about you? 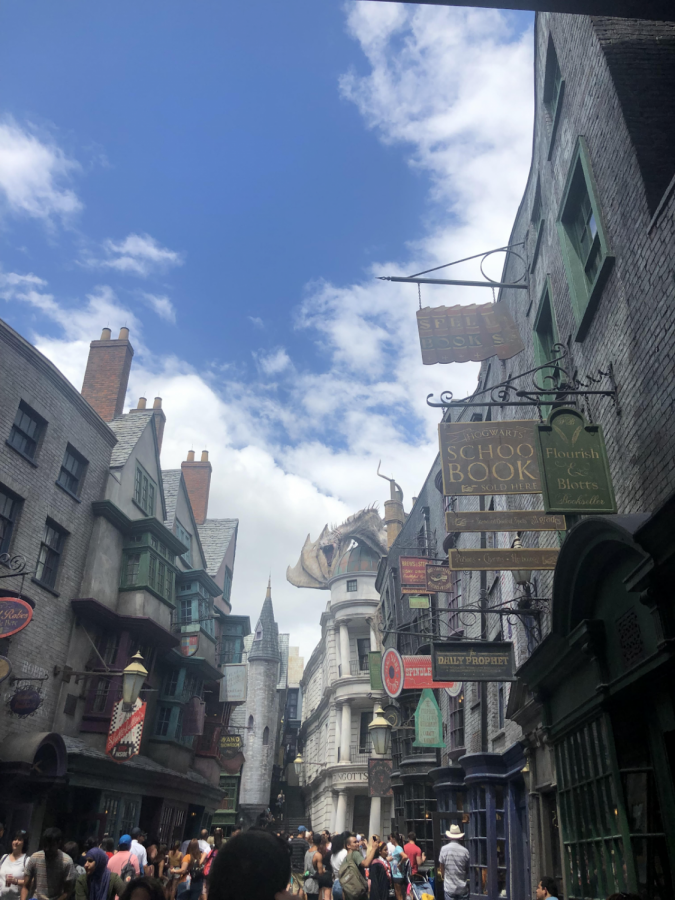 Media companies, like Universal Studios and Disney, extend cherished narratives by creating amusement parks for fans to visit and immerse themselves in the culture of their favorite stories. Pictured is the recreation of the Harry Potter movie franchise’s Diagon Alley at Universal Studios Florida. Visitors embody a wizard with purchased wands and cloaks, dine in iconic restaurants, and go on adventures with familiar characters.

In 1961, former Chairman of the Federal Communications Commission Newton Minow styled television as a “vast wasteland.” At this time, mass media began to dominate American society. Researchers and news outlets have since warned against the increasing media consumption, calling attention to learned aggression and likening those who watch excessively to zombies. So, why are people hooked?

In Donald Horton and Richard Wohl’s seminal 1956 paper ‘Mass Communication and Para-social Interaction,’ the researchers studied “the illusion of face-to-face relationships with the performer,” thus coining the term “parasocial interaction.”

Parasocial interaction involves a one-sided relationship between a media consumer and a mass media persona created out of relatability and/or romantic interest. Parasocial relationships are considered faux relationships as interactions between the two parties are limited. While the consumer extends interest and emotional energy, the media persona (news reporters, fictional characters, religious figures, politicians, etc.) is likely unaware of the other’s existence. Some have broadened the scope to apply the definition to authority figures, deceased loved ones, and even a stranger outside one’s window.

When people first hear about parasocial relationships, minds often leap to the image of a crazed teenage girl with posters plastered all over their bedroom walls, hence the term “fangirl.” However, the people who engage in parasocial interaction can have curly mustaches and live in bare rooms: virtually everyone has experienced parasocial relationships to varying degrees.

Before the advent of mass media, people most likely engaged in these relationships through attachment to spoken-word stories, books, and plays. Fictional characters and religious figures have endured time.

A simple way spectators interact is by enjoying a TV show, movie, book, or play and being entranced by the storyline and characters. Interest in the fictional may lead to a parasocial relationship with the creators and actors involved. In the case of media figures supposedly acting like themselves, like reality TV members and singers, fans can read news articles about them and consume the art and merchandise they put into the world.

More time spent doing activities related to a parasocial interest strengthens the relationship. Some interactions include reading and watching interviews, making fan art, creating videos, dreaming up new situations, and writing fan fiction. Cosplaying, another form of parasocial interaction, may involve posing for photos and going to conventions, like Comic-Con.

Fan clubs are created to have discussions and participate in activities specific to a particular parasocial interest. For those who are unable to meet in person, online communities are sought out on Discord, Reddit, and Twitter.

Selina Li ’22 is a fan of Taylor Swift and feels connected through her lyrics. Interaction with Swift is limited to listening to her music every day in the shower. When asked what she would do if someone upset the beloved singer-songwriter, Li responds, “I am prepared to launch a Twitter tirade.”

The Social Surrogacy Hypothesis states that parasocial relationships in favored TV shows allow people to experience a sense of belonging. The ubiquity of television has made this mass media form popular for parasocial interaction research. People visit favored shows when they feel lonely and, in turn, feel less lonely when they watch. In fact, those who watch more TV feel like they have more friends.

This relates back to Baumeister and Leary’s 1995 theory that the need to belong is fundamental to humans. University of Houston’s Dr. Jaye Derrick, one of the creators of the Social Surrogacy Hypothesis, explains, “We need connections to close others. Unfortunately, reality isn’t always that accommodating. We can take these fictional things, these things that aren’t real, and we can use them to better ourselves or feel better or even just to learn things from others, feel connected. I just think that’s just amazing that the human mind can do that.”

Many people indulge in “comfort” shows, movies, and books. These familiar fictional worlds help restore self-control. When needs of belongingness are activated, people tend to revel longer in descriptions of favored TV programs. Just as real-life friends can shield against the negative consequences of rejection, parasocial relationships can also buffer against shifts in mood and self-esteem.

Those higher in neuroticism and lower in self-esteem use social surrogates more often. Other social surrogates include comfort food, reminders of others, and social worlds. Less extroverted people were more likely to engage in social surrogacy as extraverted individuals do not fear rejection as much as others. Personality does some predict social surrogacy use, but situational context is a stronger predictor.

As someone with OCD, an anonymous student ’24 finds John Green’s Aza Holmes in “Turtles All the Way Down” to be relatable: “Aza has always made me feel a little less alone. Discovering her character has made me a lot more open to discussing what I’m going through with close friends and family.”

When the participants thought about fictional characters, especially characters whose traits most resembled their own and they felt closest to, a brain scan showed that the participants used their ventral medial prefrontal cortex. This reveals neural overlap with when one thinks about themself and close others.

Jillian Chong ’22 is a fan of sitcoms, like The Office and Friends, and an avid watcher of the DC cinematic universe, particularly The Flash. When her responsibilities begin to feel overwhelming, she credits The Office’s Dwight Schrute for making her laugh and commends her favorite TV shows for being there to lift her spirits.

However, she has observed her friend — a self-proclaimed Taylor Swift, Grishaverse, and Community fan — “go crazy” by screeching when something new is released and breaking down late at night over emotional scenes. Self-identifying stalker fans, or “stans” for short, are prominent in the digital sphere. They appear to be a more zealous type of fan, rather than one who spends time stalking. Chong responded, “To be honest, I don’t really get it. I feel like sometimes people get too sucked into television that sometimes it seems unhealthy.”

Some extreme reactions committing one’s life to a celebrity or fictional character’s worship.

Jack Hankin ’22 cites part three of YouTuber Tom Scott’s speech “There is No Algorithm for Truth,” which describes how celebrities manipulate fans for monetary gain and bemoans obsessive fan behavior, as a reason why he chooses to avoid parasocial relationships.

Hankin adds, “What is the difference between people’s words and who they are? You can like a YouTuber you watch, but they’re not your friend. You can like the work of a person but not the person themself.”

More recently, people are forming parasocial relationships with YouTubers, who tend to be everyday people rather than celebrities. In Valeria Tiourina’s video analyzing parasocial relationships and YouTube, “Are YouTubers (Replacing) Your Friends? Parasocial Relationships” with popular YouTuber Tiffany Ferguson, Tiourina finishes with the insight that YouTube was initially created to be a dating website and has since evolved into a general video-sharing platform. She concludes, “I claim that it’s still a relationship-building and finding site.”

Online video creators address their audience directly and make eye contact with the camera. Intimate information, like new life installments and mental health statuses, is shared. Some even attempt to blur the line between the viewer and themself by calling watchers their “friends,” or some variation of that word.

Alongside YouTube, parasocial interaction is much more accessible with other social media apps, like Twitter and Instagram. Celebrities can post their daily whereabouts, talk about their projects and emotions on live video, and respond to fans’ comments and personal messages. The invisible wall between the fan and the media persona grows hazier.

Sometimes, the wall does not exist and is punctured by direct interaction and hugs in public areas. As if one were writing a letter to a pen pal or sending a birthday present to a friend, fan mail can be sent to a publicly listed Post Office box address.

Many host meet and greets, where an exclusive group of fans get the chance to talk and take photos with them. When they go outside on an ordinary day, those who are not high-profile celebrities are not flanked by security guards and go to conventional places, making it easy for fans to approach them.

Although a fan may feel like their favorite celebrity is their friend, their reaction to direct interaction with the media persona, such as liking their comment or seeing them in public, would suggest otherwise. Here, dreams and reality clash, offering up excitement and/or disappointment.
Although favorite characters and media personas cannot be real friends, the feelings are true and can mirror the effects of meaningful real-life relationships.