The Year of Marvel

Take a look into some of Marvel’s Phase 4 movies and TV show releases coming this year. 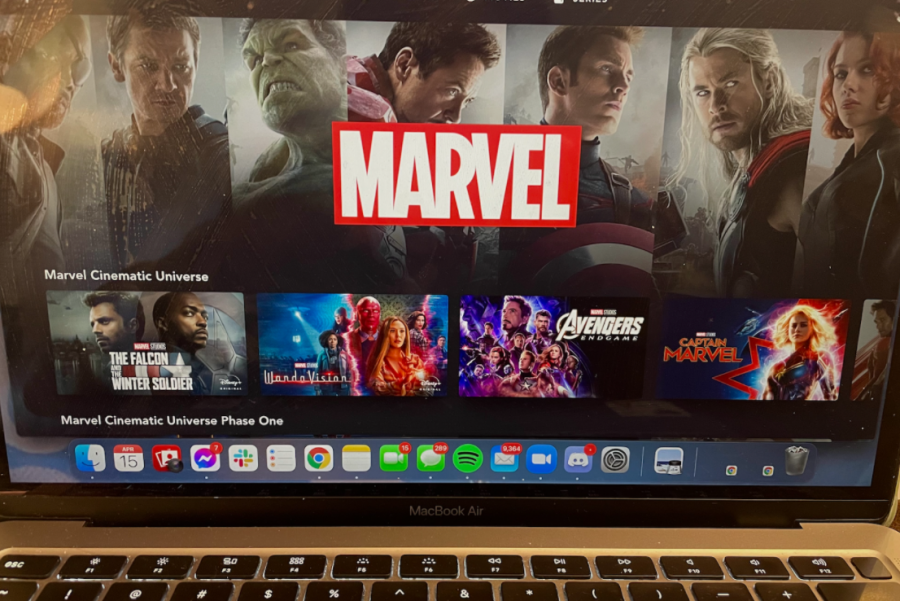 Marvel movies and shows are available to stream on Disney+, with subscription. They are both separated by release order and the phase to which the movie belongs.

After Avengers ‘Endgame’ left Marvel fans bursting into tears — whether from joy, despair, or even a combination of both — it is no doubt that the entire fandom was able to bond and share emotions through the entirety of the three-hour movie. While we were all left on the edge of our seats, uncertain of and demanding to know what the future of the Marvel Cinematic Universe holds, the MCU wasted no time and is now in-midst of phase four. With new TV series coming out available to stream on Disney+ and other movies premiering in theaters, this year especially, has us constantly excited with new releases. 2021 is certainly the year of Marvel.

What better way to kick off the start of Phase 4 for the MCU than the new TV series, WandaVision? Now available for streaming on Disney+, the show has 9 episodes, each around 40 minutes long. Taking a new approach, each episode in this show took inspiration from a different era of sitcom. Elizabeth Olsen and Paul Bettany return as Wanda, otherwise known as The Scarlet Witch, and Vision, while Monica Rambeau (Teyonah Parris), Jimmy Woo (Randall Park), and Darcy (Kat Dennings) are also featured. This show was the perfect introduction for what phase four might look like in terms of exploring the multiverse. Many have already suspected that this series will explore Wanda opening the multiverse, which will somehow lead into Doctor Strange in the Multiverse of Madness in which Wanda will also appear.

Following the highly successful WandaVision is another show coming to Disney+: The Falcon and the Winter Soldier. First airing on March 19th, 2021, this show will run for 6 episodes and officially conclude on April 23rd, 2021. Starring Anthony Mackie and Sebastian Stan as Sam Wilson (the falcon) and Bucky Barnes (the winter soldier), the duo teams up to tackle a new set of villains known as the Flag-Smashers. This show happens to follow the end of ‘Avengers: Endgame’ after Steve Rogers retires his shield and the government calls upon a new Captain America: John Walker, played by Wyatt Russell. Sophie Poritzky’21 is most excited to watch this show. “I am so looking forward to The Falcon and the Winter Soldier! I can’t wait for Bucky to have lines.”

Another show that is generating lots of excitement from avid Marvel watchers is Loki, in which none other than the iconic Tom Hiddleston will star. The first episode will make a debut on June 11th, 2021 on Disney+ and it will have a total of six episodes. This show will finally expand on Loki’s escape with the Space Stone in Avengers: Endgame and provide long awaited answers; Kevin Feige, president of Marvel Studios says the show will “tell you what happened with Loki right after [Endgame].” Hiddleston also mentioned that Loki will be going up against “more formidable opponents” and those wondering about the God of Mischief’s death and the plans he has with the Tesseract, be rest- assured as Hiddleston also promised this series will answer both of those questions.

The first Marvel movie of 2021 is Black Widow, releasing July 9th, 2021 both in theaters on the big screen and Disney+. Black Widow’s confirmed cast includes Scarlett Johansson returning as Natasha Romanoff, David Harbour as Alexi, Florence Pugh as Yelena Belova, who will serve as a “sister figure” to Natasha and takes up the Black Widow mantle in the comics. The Taskmaster will be featured as the villain but we do not know who is behind the mask just yet. It is also rumored that Robert Downey Jr. will make a cameo as well. Set after Captain America: Civil War, the plot sees Natasha Romanoff returning to the former Soviet Bloc to deal with some unresolved issues. What we do know, according to director Cate Shortland, the film will serve as a passing of the baton from Natasha to Yelena, and a “last hurrah” for Johansson, who will leave the MCU after the project.

Last, but not least, is Tom Holland’s third spider-man movie: Spider-Man: No Way Home. With no exact details yet, this film is going to star Tom Holland, Zendaya, and even rumored to explore the ideas of a multiverse adventure with Benedict Cumberbatch appearing as Doctor Strange.