The storming of the U.S. Capitol building on January 6th, 2021 laid bare the wounds that our democracy has acquired over the last four years. Now is not the time to move on, but instead, a time to reflect upon what happened in order to institute change for the future. 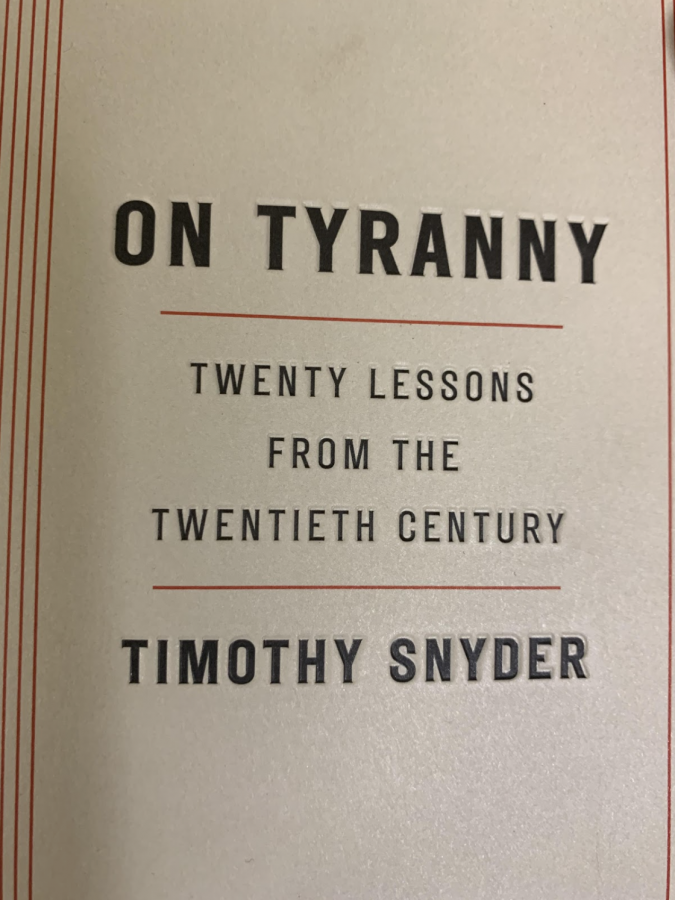 Timothy Snyder's 'On Tyranny' is a thoughtfully written and compelling guide as to how we can reverse our current democratic backsliding. It eerily predicted the events of January 6th, 2021.

“Do not obey in advance.”

That is the very first lesson given in the book On Tyranny: Twenty Lessons from the Twentieth Century by Yale professor Timothy Snyder. On Tyranny gives the reader twenty lessons for preventing and combating Democratic backsliding. Written after the tumultuous 2016 election, Snyder eerily predicts many of the events that lead up to and caused the January 6th, 2021 siege of the U.S. Capital, when hundreds of Trump supporters, some associated with white supremacist militias, stormed the building in a failed attempt to stop the certification of the November 3rd, 2020 presidential election. That first lesson that Snyder gives, to not obey in advance, is arguably the lesson the insurrectionists needed the most leading up to that day. That lesson — along with the nineteen others — cover every cause for tyranny and give us an incredible perspective of what happened on that horrible day and why.

One of the most important ideas that Snyder explains in On Tyranny is that, “history does not repeat, but it does instruct.” The events of January 6th, 2021 may not mirror the events that led to the rise of the Nazis in 1930s Germany, but they do not have to. Not only are they rooted in the same far-right sentiment, but the systematic failures of society that led to the event were nearly identical. Lesson number fourteen is “establish a private life.” The Nazis and Communists both controlled their respective populations by compelling their citizens to always live in the name of the cause and its leader.

It is shocking to me that seemingly ordinary people would take a day out of their lives in the middle of winter to storm the U.S. Capitol building, not to mention additional days for those who traveled across the country to get to Washington,D.C. “Totalitarianism was not an all-powerful state, but the erasure of the difference between private and public life,” writes Snyder. By disrupting their normal lives to fight to overturn the results of a legitimate election, these insurrectionists were openly embracing totalitarianism, whether they realize it or not.

One might say that the insurrectionists were not embracing totalitarianism because they were not forced to storm the capital and returned to their private lives (or jail) afterward. While this is true, we must also look at how their private lives brought them to the nation’s Capitol in the first place.

One of the most powerful tools that any authoritarian regime uses is isolation. Lesson number ten is “believe in truth.” Snyder describes how in 1930s Germany, isolation led to the erosion of truth. One by one, people fell for the myth of Hitler’s “greatness.” “Dreaming the world as it is begins the creation of a fictional counterworld,” writes Snyder. We must understand that through echo chambers, the people who stormed the capital were living in a fictional counterworld. In this case, the fact that the 2020 election was free and fair did not support their cause, so they viewed it as false. No amount of evidence or reasoning could change that.

In the twentieth century, it took an oppressive regime to foster isolation. However, in the present day, the internet does the dirty work for them. Lessons eleven and twelve are “Investigate” and “Make eye contact and small talk.” Today, we use the internet to a large extent in order to interact with others (especially during this time of social distancing due to the Coronavirus pandemic) and to receive our news. This has led to wide swaths of the population becoming isolated from each other, as algorithms know that people will click on articles with which they most agree.

“Within the two-dimensional internet world, new collectives have arisen, invisible by the light of day-tribes with district worldviews, beholden to manipulations,” writes Snyder. For a book published in 2017, this is a shockingly accurate description of QAnon before it even existed. Through the dark echo chambers of the internet, wild conspiracy theories such as QAnon have gone completely unchecked and unnoticed until it is too late and they have become mainstream. The storming of the nation’s Capitol building on January 6th, 2021 was a direct result of that failure.

“We need print journalists so that the story can develop on the page and in our minds,” writes Snyder. Print journalism is also not an echo chamber; its readers are not prone to isolation as long as others read it. We must get our news from reliable sources and not from inaccurate sources that tell us what we want to hear.

One thing the insurrections certainly were not doing on January 6th was following lesson numbers two and three: “Defend institutions” and “Beware of the one-party state.” However, many Americans who were not there that day also did not follow this lesson. We cannot assume that the over sixty million people who voted for Trump in the 2016 election were all invested in the far right’s fictional counterworld. Many voted for Trump because of a desire for lower taxes, an appreciation for the appointment of conservative judges, or an array of other plausible reasons. However, we must act as if each vote is our last.

Snyder describes how the Czechoslovakian communists won an overwhelming majority of the votes in a free election in 1946, but then proceeded to take full power in a coup in 1948.  “Some Czechs and Slovaks…probably realized that they were voting to end democracy, but most assumed they would have another chance,” writes Snyder. We must elect people who value our institutions and vow to uphold them. In the final debate of the 2016 presidential election, Trump would not commit to accepting the election results if he lost. A lot of people assumed the strength of our institutions would prevent any damage. We now know that was not the case. As Snyder argues regarding this point, “The mistake is to assume that rulers who came to power through institutions cannot change or destroy those very institutions.”

In sum, we must go back to that very first lesson, “Don’t obey in advance.” Through the erosion of private life, the belief of fiction over fact, isolation, and the lack of defense for our institutions, many everyday Americans learned to obey in advance.