“Breathe the Air, Drink the Drink and Taste the Fruit”: The Joys of Hiking During the Time of the Coronavirus Pandemic

An exploration of the numerous physical and mental health benefits to be found through immersing oneself in the great outdoors. 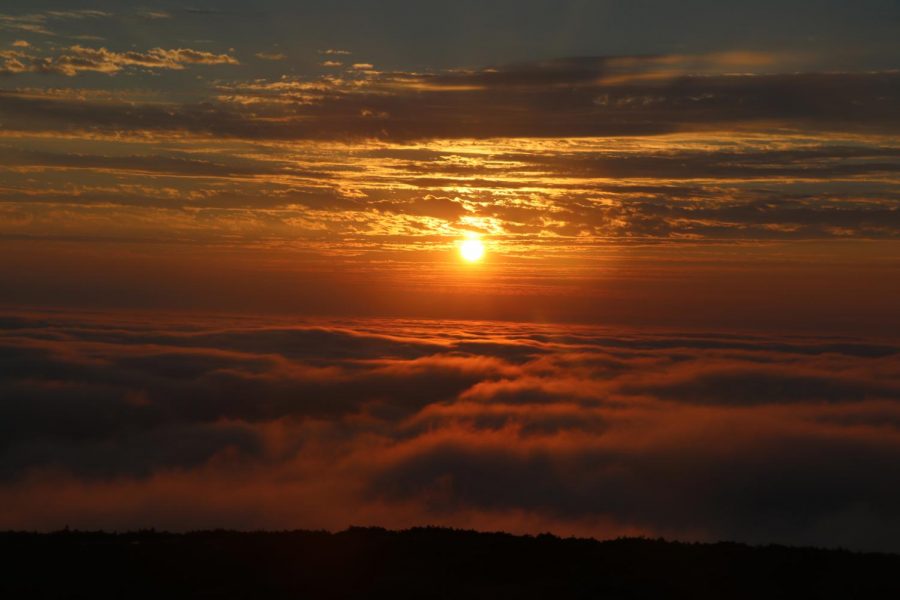 "The sunrise at Acadia National Park in Maine is worth the chilling hike at 4 a.m. in the morning, in order to see it," said Phoebe Anne Marbid '21. "Once the COVID-19 pandemic is over, I recommend that everyone put this view on their bucket list. Who would not want to witness the first rays of sunlight hitting the United States in the morning?"

In Walden (1854), Henry David Thoreau writes, “Live in each season as it passes; breathe the air, drink the drink, taste the fruit, and resign yourself to the influence of the earth.” Unfortunately, the serenity encapsulated in this sentiment feels almost impossible to achieve in this day and age. In a world of ever-increasing materialism and consumerism, there is little time or desire to slow things down, though it might be more important than ever to do so. Although nature still remains pristine in many places, few of us have the opportunity to take advantage of it, and fewer still will. After almost a year living in the new world created by the COVID-19 pandemic, we find ourselves isolated, not just from social and public interaction, but also from nature itself.

As New Yorkers, it is unsurprising that we have such limited contact with nature. Many of us frequented the larger public parks and smaller neighborhood playgrounds when we were younger, but a lack of free time and abundance of schoolwork have drastically reduced the amount of time that we spend outside, making many students long for the tree-lined Bronx Science courtyard. Now, since we are encouraged to stay inside due to the Coronavirus pandemic, many of us no longer have reasons to maintain a connection with nature. “I rarely go outside anymore,” said Saamiya Ahmed ’22. “I just don’t need to.” Some of us are lucky and have backyards and gardens rich with nature, but to those of us who find ourselves buried deep within apartment complexes or suburbs, our choices are limited to public parks. There, social distancing is often more social than distant, and trying to relax becomes a difficult feat indeed.

“While others have said that quarantine has been the perfect opportunity to become closer to nature, apart from other people, I feel that I have personally been in the outdoors way less than I was before,” said Ulises Ponce ’23. “Not everyone has the resources right now to leave the city even on a brief trip and go to green spaces far away from the crowds here in New York City, and wearing PPE and social distancing takes away from the getting-your-hands-dirty aspect of being in the outdoors,” Ponce noted.

Some students have used the time during the pandemic as an opportunity to engage with nature, using newly acquired free time in order to explore the city’s many public parks. “I have definitely been going out to Central Park a lot more, and my family has gone on a few hiking trips upstate since quarantine started,” said Sophia Randall ’22.

Many of us have found technology to be an obstacle. Between the constant buzzes and beeps of various social media outlets, numerous emails and checking grades in IOClassroom, keeping up with healthful routines is difficult right now, and that is without the terrifying and existential headlines that pop up periodically in the news media. Having the common problem of staying focused on both schoolwork and hobbies, I decided to ask a friend, Chloe Boccara (Stuyvesant High School ’22) how I might manage to stay grounded in these trying times. She quipped, “Go take a hike.”

I am no stranger to hiking. My family often encourages me to accompany them on heart-racing and challenging trails, which I must admit I find thrilling, but what Boccara had in mind was something more akin to shinrin-yoku, a Japanese term which directly translates to “forest bathing.”

Shinrin-yoku involves leaving behind material possessions such as phones behind to try to make a genuine connection between one’s senses and nature. Rather than having a goal in mind, as a traditional hike would, shinrin-yoku encourages one to absorb as much of the forest atmosphere as possible, filtering it through every sense in an effort to truly “breathe the air, drink the drink and taste the fruit” of the earth and forest.

One student who is familiar with nature is Phoebe Anne Marbid ’21. “Love of nature has long been ingrained in my family. My father was the one who thought of annual cross country road trips that allowed us to hike in so many places in the first place. It’s exciting to see new places and how they have developed over millions of years, such as the Watkins Glen Gorge or even Carlsbad Caverns,” said Marbid.

Hiking regularly creates health benefits, including a lower risk of heart disease, diabetes, and arthritis; lower blood pressure levels; strengthened muscles and weight loss; and, most importantly, stress and anxiety relief. “Hiking improves my mental health by giving me time to unwind and relax. I am able to put all of my stress and worry aside, and just enjoy the beauty of nature,” said Sydney Siskind ’23.

“The first time I went hiking, I absolutely hated it. I am not in the best shape, and the more I kept going, the more fatigued I felt. I didn’t want to slow down or take a break, or else my efforts wouldn’t have been worth it,” said Ponce. “That feeling when I couldn’t make it up was crushing, and I spent the ride home upset. However, the first time I made the trip up Bear Mountain on my own two legs, I felt a feeling of victory and accomplishment, even as a pretty physically unfit person,” Ponce noted.

“Depending on the trail, the hike will force you to walk a lot and that definitely helps physical health. And just getting away from the busy city is very relaxing,” said Sharon Gim ’21. Gim has been hiking at Beacon Mountain, Bear Mountain, and Lake Minnewaska Mountain, all of which are about an hour’s drive from Bronx Science.

There are a great many places in and around New York City where one can go hiking, but my favorite is the Cass Gallagher Nature Trail in Van Cortlandt Park, which I am familiar with, as it is the park where our cross country team often practices and competes in. Popular among Bronx Science students is Bear Mountain, which is upstate New York and offers a lovely view of Manhattan’s skyline. “It was one of my first ever hikes and it was exhausting! However, getting to see the New York City skyline thirty-five miles away from the observatory tower made it all worth it,” said Marbid, who also enjoys hiking in Forest Park, Queens. Meanwhile, Siskind often takes the train to hike in Pelham Bay Park, which is in the Bronx.

In Brooklyn, Prospect Park is a good option for hiking, with many attractions including Prospect Park Lake. Also in Brooklyn, Marine Park offers many trails as well as a salt-marsh and several different species of wild animals. “Sometimes I can also smell the flowers or other plants in the woods along with fresh air that is very calming and peaceful,” said Siskind, who believes that wildlife is one of the best parts of hiking. “I love hiking and then suddenly stopping, because I’ve just seen a deer or a fox, or even a larger predator from afar.” In Manhattan, Fort Tryon Park and Inwood Hill Park both offer many trails and beautiful views of the Hudson River and New Jersey.

I decided to take Boccara’s advice and found myself strolling through the Palisades Park just across from the George Washington Bridge. The leaves had just started to brown at the time, and when the sun set there was the most beautiful golden glow that covered the entire sky and river. I could smell the dried leaves as they crunched underfoot, and the only noise was the twittering of the birds in the trees. It was peaceful, and I found myself  the most at ease I had been since the pandemic began.
Having the common problem of staying focused on both schoolwork and hobbies, I decided to ask a friend, Chloe Boccara (Stuyvesant High School ’22) how I might manage to stay grounded in these trying times. She quipped, “Go take a hike.”