A Review of Netflix’s ‘Fate: The Winx Saga’

While ‘Fate: The Winx Saga’s’ more mature storyline appeals to young adult and adult viewers, the show finds major fault in its lack of diversity which highlights a larger issue of representation in the media. 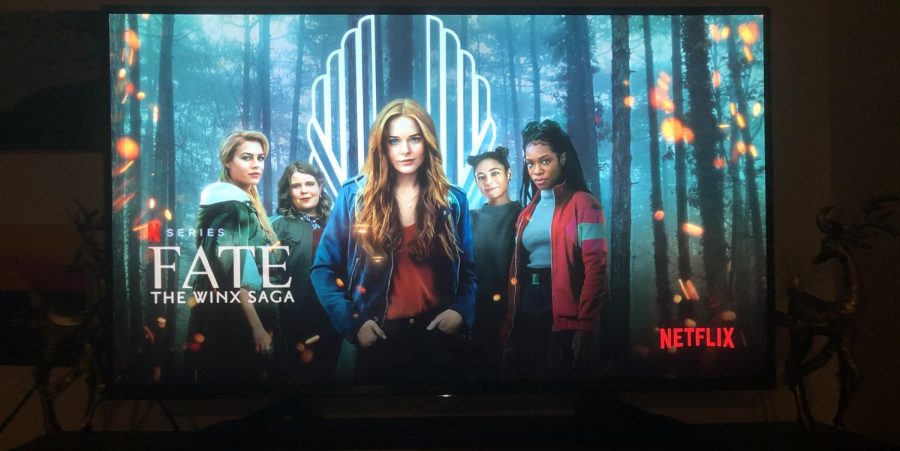 Netflix’s ‘Fate: The Winx Saga’ premiered on January 22nd, 2021. Pictured from left to right, the Winx are Stella, Terra, Bloom, Musa, and Aisha.

When I was in elementary school, I developed a morning ritual that I religiously stuck to each school day morning. After groggily getting out of bed, donning my school uniform, and grabbing a pancake from the kitchen table, I would rush to the living room. There I would plop myself down in front of the T.V., turn on Nickelodeon, and watch as an episode of ‘Winx Club’ unfolded. My eyes stayed glued to the bright cartoon characters on the screen until the time arrived to depart to my K-8 school.

As a die-hard ‘Winx Club’ fan, I was intrigued when Netflix released its ‘Fate: The Winx Saga’ trailer. When I first watched the trailer, I was wary of not finding anything reminiscent of the nostalgic children’s cartoon in ‘Fate: The Winx Saga.’ After watching the show, I firmly believe that it would be a mistake to go into ‘Fate: The Winx Saga’ expecting the colorful ‘Winx Club.’ The live-action adaptation only loosely borrows from the world that animator Iginio Straffi created, with several key differences distinguishing it from its predecessor.

One of the most notable distinctions is that Tecna, the Fairy of Technology and one of the original Winx, does not exist in the live-action adaptation. The show indirectly addresses Tecna’s absence when Headmistress Dowling states that all fairies have control over an element. As technology is not an element, it makes sense why Tecna was not included in the adaptation.

Then, there are the differences that highlight ‘Fate: The Winx Saga’s’ darker, more mature story-line. In the original ‘Winx,’ Bloom, the Fairy of Fire and the main character of both ‘Winx’ shows, learns of her magic when she helps Stella, the Fairy of the Shining Sun and princess of Solaria, defeat a troll in the woods. In ‘Fate: The Winx Saga,’ on the other hand, Bloom learns of her powers after almost burning her parents’ bedroom down.

This single event also points to the sense of danger that ‘Fate: The Winx Saga’ tries to maintain throughout its first season. While Winx Club episodes often ended on a positive note, ‘Fate: The Winx Saga’ does not aim to provide its viewers with a peaceful resolution and the end of every episode. Instead, a major mystery spans all six episodes, and readers must reason everything out alongside the Winx.

While the more mature storyline appeals to young adult and adult viewers,  and while the plot is interesting and the characters more relatable, the show has its faults, with a big one being its lack of diversity. After the release of its first trailer, ‘Fate: The Winx Saga’ drew rebuke from fans, who accused Netflix of white-washing two characters: Musa and Flora.

The Winx fairies are said to be based on celebrities, with Musa, the Fairy of Music, being based on Chinese actress Lucy Liu, and Flora, the Fairy of Nature, being based on Latina superstar Jennifer Lopez. In ‘Fate: The Winx Saga,’ Elisha Applebaum plays Musa. Flora does not make an appearance. Instead, her cousin, Terra, Fairy of the Earth, is part of the Winx group. Terra is played by Eliot Salt, a white actress from the U.K. With Musa being whitewashed and Flora not being included in ‘Fate: The Winx Saga,’ the only character of color that is part of the Winx group is Aisha, who is played by Precious Mustapha.

‘Fate: The Winx Saga’s’ lack of diversity highlights a long-term problem of representation in the media. Although representation in the media is essential, Hollywood has always struggled with diversity. According to a UCLA study, only 27.6% of film leads in 2019’s top films were played by people of color while 72.4% of those roles were portrayed by white actors. This lack of representation also appears off-stage, with only about 13.9% of film writers and 15.1% of film directors for 140 films being people of color.

Personally, the show’s lack of diversity prevented me from fully enjoying it. While I found myself able to distance ‘Fate: The Winx Saga’ from ‘Winx Club’ and appreciate the new storyline, I could not help but remember how the creators could not even do the bare minimum when it came to diversity. Instead of casting actors of color to play characters of color, the producers whitewashed Musa and replaced Flora, perpetuating a problem that Hollywood has continually struggled with. Knowing this soured my experience.

As much as I loved it and as comforting as it was to lose myself in Magix (the fantasy realm Alfea is located in, known as the Otherworld in ‘Fate’) during mundane mornings, Winx Club is part of my past. Instead of trying to relive it through ‘Fate: The Winx Saga,’ I will move on.

To watch ‘Fate: The Winx Sage’ on Netflix (subscription required), click HERE.
While the more mature storyline appeals to young adult and adult viewers,  and while the plot is interesting and the characters more relatable, the show has its faults, with a big one being its lack of diversity.