A Review of Obama’s ‘A Promised Land’

In his 768-page memoir, Barack Obama takes us on his political journey in a book full of polished prose. 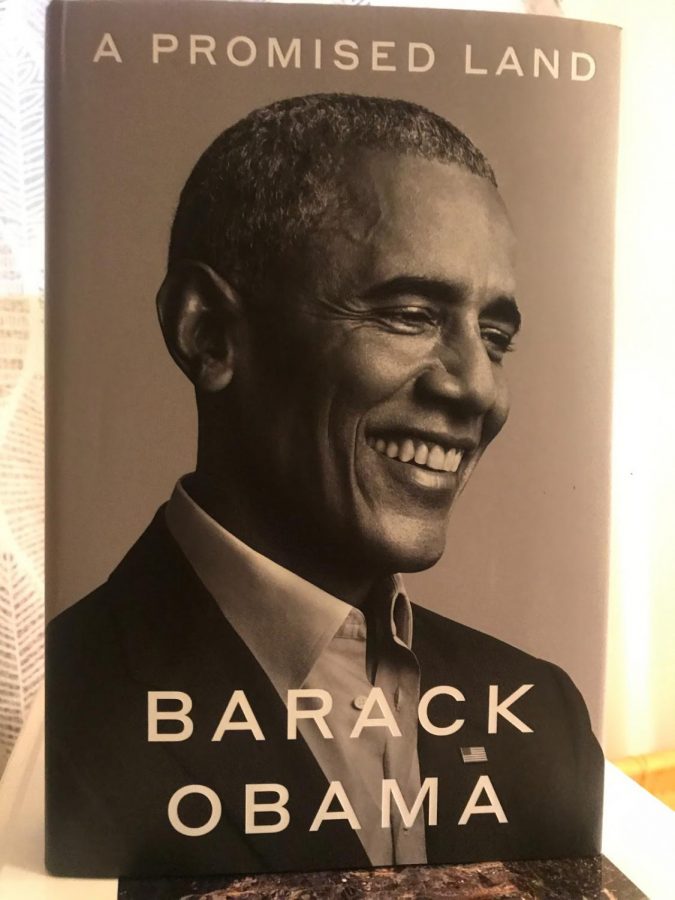 Barack Obama’s 768-page memoir takes readers on a vivid stroll of the years that catapulted him into the Presidency and the challenges that he faced along the way.

Dignified, classy and calm — that is how Barack Obama is normally perceived, but his new memoir ‘A Promised Land’ lends readers a closer look at two of the eight years of his presidency, and the moments that led to his 2008 Democratic nomination for President.

A memoir is candid by nature, and Obama’s memoir is teeming with constant reflection and introspection; he cringes at his early twenties, when he lived “like a monk,” as he absorbed ideas of political theory through thick books in his smoke-filled apartment. The former president acknowledges that politics is shady, akin to “actors in a rigged game.” He reflects that whether he had a preference for “fair play” or not, he did not like to lose.

Obama mentions the toll that running for Illinois state senator and Congress had on his marriage, with his wife Michelle Obama sometimes becoming agitated with his ambition: “This isn’t what I signed up for, Barack.” His honesty is a common practice in memoirs. But given that ‘A Promised Land’ is also an autobiography, Obama is not immune from being vague about some of his mistakes in forestalling more intense criticism. After all, Obama is susceptible to chiding and critique; nitpickers love to dissect his every move and scour for gaffes in his speech. However, some mistakes of his become clothed in a layer of ambiguity — when Obama leaves community organizing in Chicago to attend Harvard Law School, his motives are “up to interpretation.” He should have told readers what he believed his motives to be, as he reflects later that he is aware of his own hunger and ambition.

Obama tries to flip the dark side of politics from the inside out. His approach to politics is people-focused: During his United States Senate campaign, Obama drove around from dilapidated Chicago towns to wealthy, leafy suburbs, listening to people’s stories. He writes, “politics doesn’t have to be what people think it is. It can be something more.” Obama and several hundred volunteers went knocking on doors all over Iowa in order to get voters to become engaged.

Obama’s ambition and idealism is a common theme that runs throughout the memoir. He had a bright-eyed hope that perhaps he could string people of all races, creeds, and backgrounds together, into supporting someone who would support them in return. It is no surprise that Obama is an inspiration — this ambition sprung from his time in public service, where he first worked as an organizer in Chicago. He saw the small changes that he made in people’s lives, which made him wonder if he could produce those changes at a larger scale, with each political step aiming to reach more people than the last.

Obama’s book is kind to those who helped him along the way — he showers his advisors and campaign managers with compliments and praise, spanning several paragraphs on many pages. However, he is much harder on himself than he needs to be. Perhaps it is a preemptive measure taken against the scathing attacks, some of them racially charged, that occurred on his path to the Presidency and his post-Presidential career. He attacks not a single person in the book. He calls the white woman who refused to shake his hand because he was Black, “well-dressed.” It is a bit disheartening that in his own memoir, Obama sometimes feels pressured to watch his tone or “explain himself” over a misconstrued remark that was made nearly thirteen years ago. Yet, it is refreshing to hear him lament about his losses and shortcomings, even more so when he indulges in a bout of justified anger and indignation over the racist attacks coming from his critics.

‘A Promised Land’ reads like a great novel, given the narrative drive of its story, with one of the most unique protagonists. It is remarkable that through the zeniths and lows of his ascension to the Presidency, he can look back on such moments with such an attention to detail.
Obama’s ambition and idealism is a common theme that runs throughout the memoir. He had a bright-eyed hope that perhaps he could string people of all races, creeds, and backgrounds together, into supporting someone who would support them in return.