A Critique of the Grammy Awards, Past and Present

As the 2021 Grammy Awards Ceremony approaches, here is what Bronx Science students think about current and past nominations. 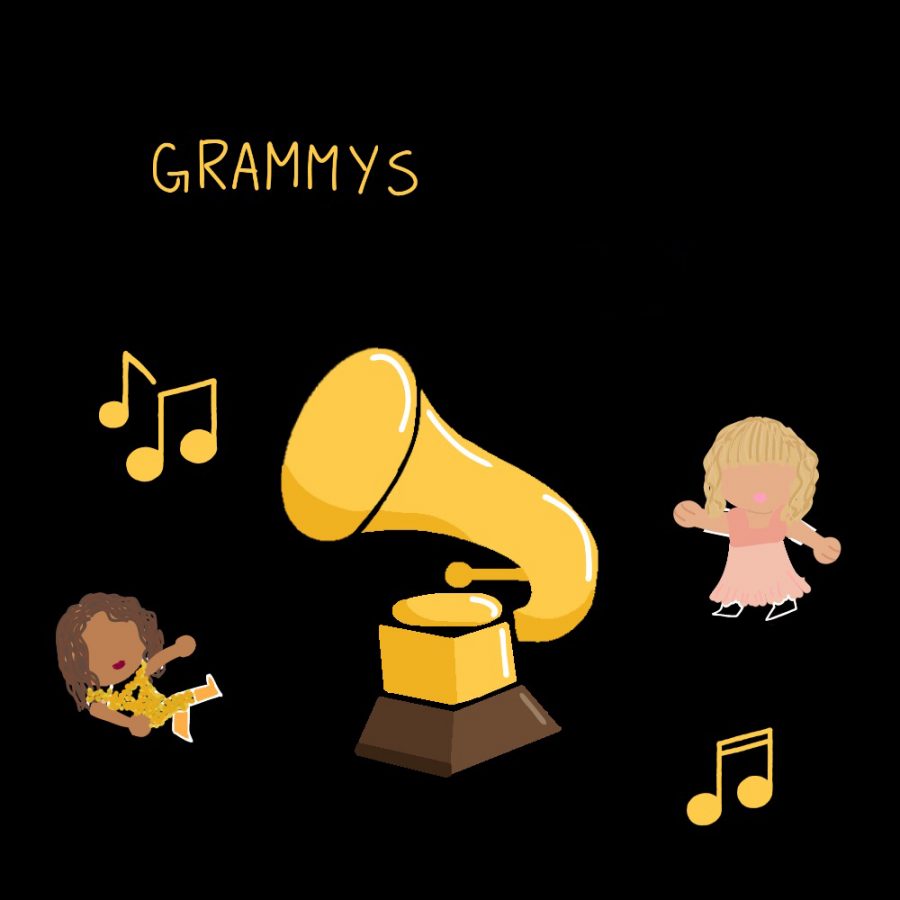 The Grammys are one of the most prestigious music awards that an artist can receive in the music industry, and they are seen as a sign of recognition and admiration for musicians. An artist who wins an award is presented with a gramophone, and every year, fans of popular music artists watch The Grammys Awards Ceremony to see if their favorite artists and songs will win.

The Sixty-Third Annual Grammy Awards Ceremony will be held on January 31st, 2021 in celebration of the music that has been released over the past year. Musicians have been forced to adapt their promotion techniques to the current global COVID-19 crisis, opting for virtual television and late-night appearances, socially distanced press events, and complete cancellations or postponements of worldwide tours. The Grammy nominations were announced on November 24th, 2020. Every year, the best musical artists and pieces are nominated for awards by voting members, after being deemed eligible.

For the 2021 Grammys, female artists Dua Lipa, Beyoncé, and Taylor Swift swept the floor of the nominations; Dua Lipa and Swift with six nominations each, and Beyoncé with nine. Beyoncé’s track Black Parade has been nominated for song and record of the year, along with Colors by Black Pumas, Rockstar by DaBaby, Say So by Doja Cat, everything I wanted by Billie Eilish, Don’t Start Now by Dua Lipa, Circles by Post Malone and Savage by Megan Thee Stallion.

An artist being nominated for the Grammys is a major accomplishment, so their listeners are understandably excited or upset depending on the nomination outcome. “I’m excited to see Chloe x Halle nominated for best progressive R&B album. Ungodly Hour was my favorite album this year, and it really showcases their growth as artists. I am glad their hard work is being noticed,” said Aissata Barry ’22.

“I also am excited for the nominations Phoebe Bridgers got for Best New Artist, Best Alternative Album, Best Rock Song, and Best Rock Performance for Kyoto. It was really unexpected, and I didn’t think she would be recognized by the Grammys, because she isn’t mainstream. I think that Grammy voters may be starting to expand upon their taste in music,” said Barry. While Phoebe Bridgers is not a new artist, having been active in the industry since 2014, voters did not recognize her until her album Punisher was released earlier this year.

“Although I am happy about Bridgers’ accolates, Fka Twigs was snubbed in the Alternative category, and Rina Sawayama should have gotten Best New Artist instead of Kaytranada, who has been in the industry for nearly a decade,” said Barry. “I also don’t feel that Black Parade should have been nominated for Song of the Year or Record of the Year. I feel that it’s definitely one of Beyoncé’s weaker songs, even though Black is King is undoubtedly a masterpiece and deserves all of its praise.”

Over the years, there has been doubt cast upon the fairness of both the nomination and voting process used with the Grammy Awards. A year ago, in January 2020, the first female Grammys Chief, Deborah Dugan, was placed on administrative leave due to an apparent allegation of misconduct. Many believe that this was in response to her allegations of corruption within the Recording Academy, which is the company that controls the Grammy Awards.

To be deemed eligible, experts in the field must determine that entries made by artists meet the proper requirements after they are submitted. After that, the entries are sorted into 84 categories, and ballots are sent to voting members to decide upon nominees. Once nominations are finalized, the final ballots are sent to the final voting members, who determine the winners of the awards.

However, often times the artists who end up receiving nominations are questionable or even outright unfair, usually favoring white male artists. For example, in the 2017 Grammys, Adele won Album of the Year for 25, rather than Beyoncé for Lemonade. Many, including Adele herself, believed that this was blatantly unfair, and just went to show the bias that exists within the music industry. Another aspect of the Grammy Awards that reveals corruption lies within the artists who receive many nominations but never actually win a prize, which can been seen as a way for the Grammys to seem more diverse while maintaining the status quo. Rapper Calvin Cordozar Broadus Jr., or Snoop Dogg, has received 16 nominations, yet he has never won a Grammy. Similarly, alternative artist Björk has accumulated 15 nominations and also has yet to win.

When Eddie Vedder from Pearl Jam won the award for Best Hard Rock Performance in 1996, he said, “I don’t know what this means. I don’t think it means anything.” The Grammys provide a commercial opportunity, which means that the most important quality in music becomes profitability. Therefore, Rock n’ Roll and its variants are largely overlooked or are relegated to existing as a part of pop music, and albums that produce better sales are valued more. “I’m not a fan of Taylor Swift, but I do think that she will sweep in the three main categories because Folklore is well-liked in the industry,” said Barry.

One artist who was quite openly snubbed by the Recording Academy this year is Canadian Abel Tesfaye, known better by his stage name, The Weeknd. Tesfaye is a singer and songwriter known for his unique musical style influenced by R&B, pop, and disco. On November 24th, 2020, after his album After Hours was completely overlooked, Tesfaye tweeted, “The Grammys remain corrupt. You owe me, my fans and the industry transparency…”  which received over 1.1 million likes.

Does he even deserve a Grammy? Well, with his album After Hours reaching and staying at the top of charts for weeks, and with the song Blinding Lights being the most streamed song on Spotify this year, most people would say that he is at least deserving of a nomination. Overall, although The Weeknd has received ten nominations, he has only won the award three times, and fans are skeptical of the nomination process after he did not receive one.  “According to Spotify Wrapped this year, Blinding Lights was the most listened-to song,” said Sophia Randall ’22, “It was a huge hit, and I was blown away that he wasn’t even nominated, while Justin Bieber got four nominations for his album Changes.”

“As the Weeknd said, the Grammys need to be more transparent with their voting process. I truly can’t see how The Weeknd did not get enough votes to be nominated in any of the categories to which he submitted his work,” said Barry, “His album broke records on Billboard, and for him to not get any nominations is incredibly confusing and disappointing.”

On a more positive note, it seems that the music genre of Kpop is finally getting the recognition that it deserves, with the Bangtan Boys, better known by the name BTS, becoming the first Kpop group to receive a nomination that recognizes their musical talent, as they have been nominated for the Best Pop Duo/Group Performance category (they received a nomination in the 2019 Grammys for album art). “I am so so happy for the nominations that BTS has received. They worked so hard this year releasing two albums, and ‘Dynamite’ is one of my favorite songs. Hopefully, their nominations means that the Grammy voters will start to recognize K-Pop more, because it is truly a beautiful genre,” said Barry.

In reaction to their history-making nomination, BTS tweeted, “Ohmmmmmmyyyyyyyyggghghhhhhhhgggggggggdhdhsjsixudbslsogbdsisgshdbxidjdbdidhdifjfiri.” In the 2020 Grammy Awards, BTS did not get nominated, but they were selected to perform for the ceremony with Lil Nas X. “BTS had pretty much only been featured as a performer for advertising purposes, as they received thirty seconds of screen time and singing, during Lil Nas X’s performance,” said a Bronx Science senior who wishes to remain anonymous. “To me, this was really disheartening, not only as a fan, but also just seeing how the Grammys were treating artists. I’m really glad that they were nominated for their actual music this year, although they are probably going to lose to Rain on Me.”