Wonder in Something Ordinary: The Thousand-Year-Old History of Playing Cards 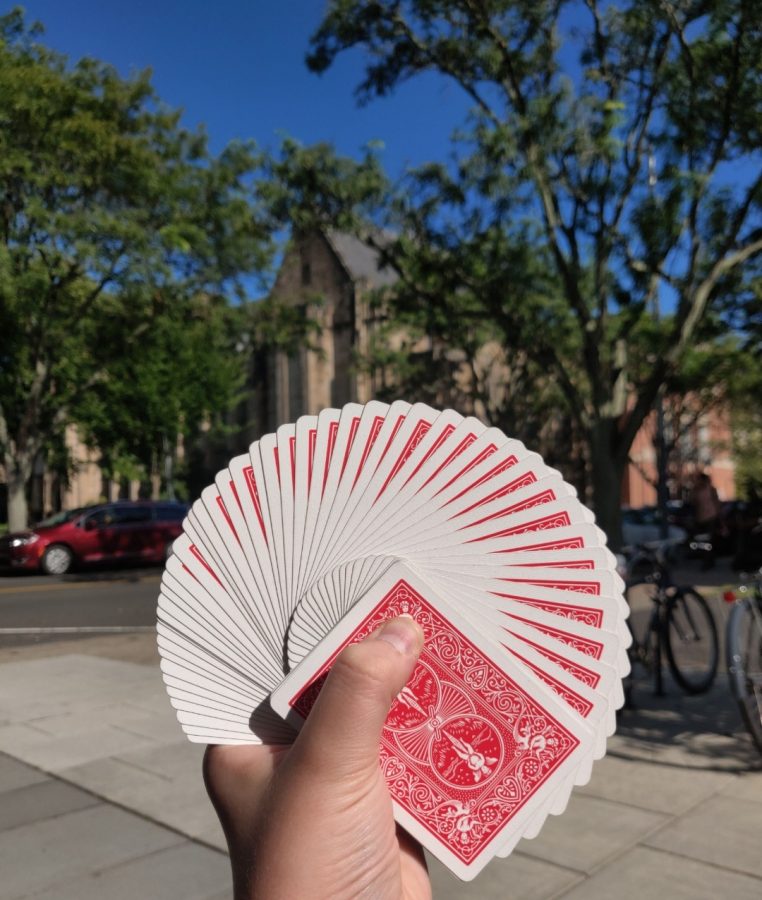 This is a "thumb fan" display of cards, taken near the Beinecke Rare Book & Manuscript Library in New Haven, Connecticut, which holds the Cary Collection of Playing Cards.

It is often said that someone is “dealt a bad hand” when they are faced with misfortune. If I had to choose a single example of the flexibility of language, that would be it. Most people rarely think about playing cards with any depth, but they have asserted a position in our culture that is so ubiquitous that the scenario of a game of tiny paper cards colloquially embodies the will of the universe. Such an observation raises the question of how something so seemingly insignificant became such a staple of culture.

We have little concrete evidence that playing cards existed or were used before 1000 C.E. A 9th century text referencing the Chinese game yezi xe (“game of leaves”) is commonly cited. However the “leaves” may not have referred to playing cards, but instead to a manual or instructional booklet. While there are various games and traditions that could have used early non-numerical “cards” in China before 1000 C.E., those claims are not concrete enough to pinpoint a “first deck” either. Even without hard proof, like an extant pack of early Chinese cards, there is enough broad evidence to reason that cards originated in China before the 11th century.

An early example of a game using playing cards can be found in a 1294 police report from Shandong, China. Two gamblers caught with playing cards were arrested and had their printing blocks taken away. There were plenty of games with drinking and gambling that may have given rise to playing cards, and some believe that they first were used as substitutes for money. It is theorized that they were used to play games and were wagered during these games.

There are many secondhand reports or physical evidence of playing cards that have been found from around that point or in the 1300s. It must be noted that these are fallible, subject to translation difficulties and other mishaps. Analyses of physical playing cards can also give rise to  different interpretations, so for many of these we do not know with certainty what a full deck looked like or the circumstances of their use.

There is a German manuscript from a monk called Johannes of Rheinfelden that is thought to date to 1377. It seemingly describes various types of decks, including one with four suits of thirteen cards. It also describes decks with 60 cards or more. In it, Johannes makes it seem like playing cards were in wide popular use at that time. Analyses of the manuscript vary in their conclusions about the date of the manuscript and the different kinds of decks described, and this is partially because the original document is missing. Despite conflicting interpretations of specific details of the manuscript, it is an undeniable confirmation of the existence of playing cards at that point in time.

It is probable that playing cards spread to Europe through Egypt. There are multiple examples of playing cards in Egypt from the Mamluk Sultanate. One specific deck of Mamluk cards is preserved from around the 15th century. It has four suits, coins, cups, swords and polo-sticks, and was created with thirteen cards per suit. Each suit had ten pip (numbered) cards and three court cards, which were elegantly designed but did not portray individuals, possibly due to religious beliefs. It was certainly a luxury item — the cards are intricately hand-painted, with aphorisms written on them. We currently only have 47 surviving cards from the Mamluk deck.

Many European decks paralleled the Mamluk suits. Decks in Italy and Spain used suits of swords, clubs, coins, and cups, and they still do to this day. Across Europe, different conventions were used for the court cards. Spanish and German decks had three men: the king and two lower officials, like knights and knaves. Italian decks had a king, a queen, and a knave. At this point, the deck size was not standardized. There were decks of 40 cards in Spain, and 48-card decks in Germany. The suits generally used in the German 48-card decks were acorns, leaves, hearts, and bells, though customization spread rapidly and many unique decks were made. Germany emerged as a large playing card maker, because of their printing processes which allowed them to make decks in large quantities. Today, a standard German deck uses acorns, leaves, hearts, and bells.

The suits that we know today — clubs, hearts, spades and diamonds — emerged around 1480 in France, typically using a king, queen, and knave for court cards. They made the designs of decks, split into red and black, more easy to replicate, and the production of playing cards in France outpaced Germany, leading the French deck to become widely adopted. This occurred around the time that the Gutenberg printing press was invented. Most of the aesthetic of modern playing cards is a remnant of this period. At that point, though, there was still wide irregularity in court cards and deck sizes, which settled as time went on and the expansion of production capabilities led to more uniform regional playing card conventions.

Around 1700, another notable development in the design of playing cards occurred. Decks started being printed with the indices (the number or letter corresponding to the value of the card) in the corners, so that players could fan the cards with one hand and see what cards they had, and rounded corners became used later partially because of this. In the mid-18th century, double-ended court cards were made because the act of turning a card right side up would reveal to other players that you had a court card. These cards were actually initially banned in France, but over the following 100 years, double-ended court cards became regularly used. In 1828, an English policy was put in place that led to the intricate designs exclusive to the ace of spades that we see today. This happened because of English tax policy on playing cards, where stamps or particular designs on the ace of spades had to be used as proof that a tax was paid. The other big change around this time was the creation of the jack. In 1864, American decks were published with a “J” instead of a “Kn” in order to avoid confusion between the knave and the king (“K”). The knave was subsequently replaced by the jack.

Playing cards did not stop developing past that point, but the foundation for our modern playing cards had been set and basically standardized. Playing cards were no longer a luxury item and games with them became extremely popular as leisure or serious activities. With widespread adoption, they began to show up in places that no early adopters would have expected. An example of this is the Vietnam War. United States troops thought that the spade represented death and misfortune in Vietnamese culture, so many soldiers put the ace of spades on their helmets. They were also used tactically, though, as the army received playing cards that were printed with maps inside that they could access by wetting and splitting the cards.

The spread of playing cards was instrumental to another craft now closely associated with them — magic. The easily understood marking system that imbued each card with a unique identity made playing cards a perfect choice for various magical effects, like mind-reading. The craft of card manipulation for deception had developed earlier for cheating in card games, but magic was unique in that it used deception for entertainment rather than fraud, making it an honest craft. Playing cards became a new platform for sleight of hand and the literature surrounding that exploded in volume and popularity. Inmates interested in magic have started making cards out of milk cartons, along with various other props and tools. Magic has given them a creative outlet in prison and that manifests in universally recognizable sheets of clubs, hearts, spades, and diamonds.

Largely unknown to the general public, there are wide markets for playing cards and playing card resellers. It is like the fashion industry, with prestigious designers, rare and fabled decks, and release events that sell out of stock immediately. This is partially fueled by a relatively recent pursuit known as cardistry, which employs manipulation of playing cards to create spectacular and hypnotic visual displays. It is very distinct from magic, but there is some overlap in the practitioners of the two crafts. It is a rapidly expanding movement, largely driven by incredibly talented teenagers and young adults.

“Playing cards offer wonder in something that’s ordinary,” said William Wang ’22, a Bronx Science student and close friend of mine who has taken tremendous initiative in this field. He workshopped and created an organization called Magic Beyond Barriers with a mission to donate playing cards and magic supplies to aspiring cardists and magicians with limited access to these resources domestically and internationally. I have been involved in Magic Beyond Barriers for nearly six months. “A deck is a very tiny package of cardboard with drawings of hearts and diamonds, but if you do the math, the number of possible card sequences in a single one is incomprehensibly massive. You can get that level of complexity in a small, $2 pack of paper,” said Wang. If a deck of cards was shuffled one million times each second since the beginning of time, the number of remaining possible combinations of playing cards would be basically unchanged. Things like magic tricks and card games are ways of controlling and finding order in that chaos.

The creation and spread of playing cards tells a grand story about the interests of human beings across history. They are not only a product of human creativity but also the fuel driving creativity and passion among card mechanics, magicians, cardists, collectors, and the card-playing general public. They have formed identities or associations of their own, such as in books like Alice in Wonderland, and even though they are not restrained to production standards or real-world practicality, digital solitaire programs use a classic deck by default because it is so ubiquitous and recognizable. A thousand years of development have cemented playing cards as an important though often unnoticed fixture of American culture.
“Playing cards offer wonder in something that’s ordinary,” said William Wang ’22.