Three Games, Three Methods: Why Do We Play the Games That We Play? 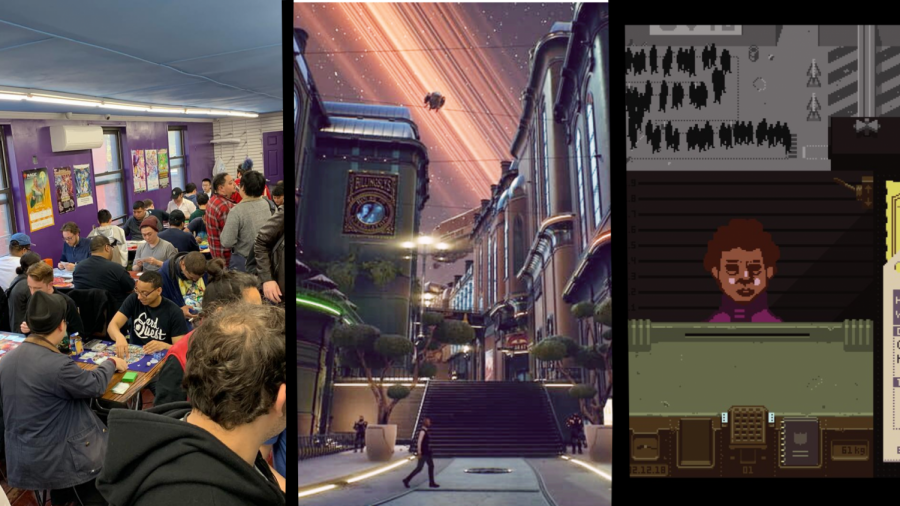 We Gather For Magic

When we talk about card games, Magic The Gathering (MTG) is the grandfather of the genre, as it is one of the earliest, and it remains one of the most popular trading card games to this day. In Magic the Gathering, you play as a magical wizard who casts spells and summon minions by channeling mana to destroy an enemy wizard. But, Magic the Gathering has never been about the game; instead, it has always been about the community who plays it.

Whether it is content creators like Tolarian Community College’s The Professor, a former English professor who now teaches MTG, famous actors and engineers such as Joseph Gordon Levitt (Inception) and Grant Imahara (Mythbusters), or local game stores like Card Quest here in New York, where people play, buy, and sell cards, people play MTG in order to gain a sense of community. They play it to talk to new people, to trade their cards, and to compete with one another. People come to these shops to play with community members such as construction workers and their sons who are white-collar workers, after a day of work. In these shops, you can also find students and teachers. Many students and teachers in our school, such as Justin Yi Cheng ‘23 and Mr. Cheung of the Mathematics Department, play at card shops in order to compete in local tournaments and play with the local community. This sense of community also translates into other games such as League of Legends, a multiplayer online battle arena, with E-sports events and fan art. So decidedly, community interaction would appear to be an important part of why we play games.

When we talk about the difficulties of a game, we often talk about how hard it is to pass a level, but in Lucas Pope’s genre-bending paperwork simulator, Papers Please!, the difficulty comes in the form of morality. In Papers Please!, you play as the border inspector of a vaguely Russian state on the verge of a revolution. In this game, you must check people’s passports and entry papers, with more rules being added each day. At the end of each day, you also have to pay rent, feed your family, and pay for medicine.

Now, you may think that the challenge in this game comes from the aspects of micromanagement and inspection. But, the hard part actually comes from the many moral choices that you may need to make throughout the game. Do you adopt your niece who is now an orphan? Do you let someone in with invalid paperwork in order to reunite a family? These moral choices often impact which ending you get. Yet, at times, you are forced into difficult decisions because of the lack of resources. For instance, you may need to refuse entry to a sick woman who needs surgery because the monetary penalty that you would need to pay would cause your son to not get enough food.

This brings us to the second reason as to why we play games — the challenge. In Papers Please!, the challenge is to define your morals while keeping your family alive. You are in a constant balance between moral decisions, money, the law, and the revolution. This form of challenge is what a lot of people look for when they play games. Other games such as Cuphead, a 2-dimensional boss rush simulator, may be difficult in other ways because they involve learning pattern recognition and control schematics. However, when one completes a challenge, they would feel the same sense of immense satisfaction and joy as they would in Papers Please!

When you mention video games to an older audience, they usually think of Fallout, a revolutionary role-playing game that created a new genre of adventuring games built off of careful game design and story arcs. That is why when The Outer Worlds, an open-world role-playing game, was released, both critics and players reviewed it extremely well. In The Outer Worlds, you play as a spaceship pilot tasked to save a solar system from the grasps of corporate greed, while recruiting allies and forging new paths.

The goal of The Outer Worlds is not as concrete as I made it out to be. You can actually choose many different paths to go down. In your play-throughs, you may choose to side with many different factions of various planets and have up to six unique compatriots to accompany you on your journey.  On one planet you may need to help a city fix its food supply and find those who have abandoned it, whilst on another, you may need to help set up a date for your engineer friend.

The game has many layers to it as well; you can choose different paths and solutions in the course of your progress. For example, instead of turning the abandoned workers back to the city, you can choose to give them electricity and let them host a settlement, which would destroy the city in the process.

This brings us to the third point, that of choice. Many people enjoy role-playing games because of their interactive elements. The ability to choose what happens in the story makes people feel like they are making an impact, even if their decision yields no change. This idea of controlling and impacting a world often resonates with people who feel like they lack control in their normal lives. The idea of living in a fantasy world with beautiful scenery and wondrous music is what people want while playing a game. Whether it is being submerged in the beauty of  The Outer World or experiencing the heartfelt story of something like Ni No Kuni, a game about a boy trying to bring back his mother, people want to get away from their day-to-day gritty reality, especially during the current time of the global Coronavirus pandemic.

So, Why do we play games?