Songs in a Major (Pandemic) Key

Quarantine restrictions during the Coronavirus pandemic are eliciting something unexpected -- creativity in keeping art and music available to all. Local New York City musicians have been hosting COVID-19 safe social distanced outdoor concerts as a way to continue celebrating music even through a pandemic. 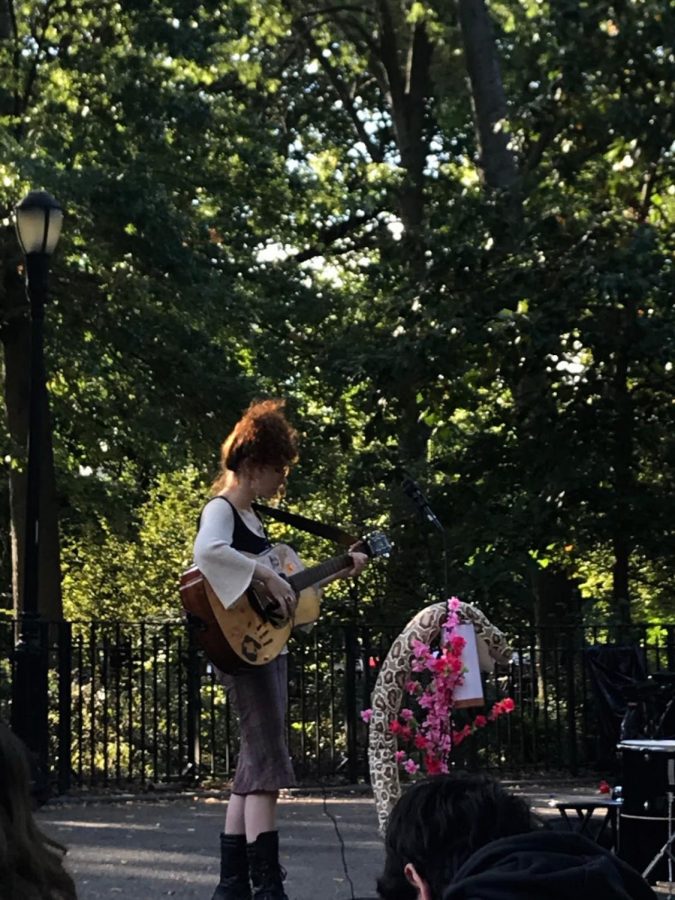 A beautiful, albeit a bit awkward, sight is that of masked-up teenagers dancing while socially distanced in Tompkins Square Park. Knowing that people need art now, more than ever, local New York City musicians have worked hard over the past few months to rewire the way they imagine concerts. In a time of struggle during the global Coronavirus pandemic, music can make a quarantine more bearable.

Concerts are celebrations of togetherness and creativity, two things that have been greatly affected for many artists and people during the Coronavirus pandemic. So, coming up with ways to revive these two things out has required some ingenuity. But that is what artists are here for, right?

Musicians have long found original and unconventional ways to share their art, and the challenge of the pandemic is no match for their creativity. Street performance and busking (traditionally the act of playing music in public for voluntary donations) have been a part of culture since antiquity. In medieval France, buskers were known as troubadours, and in Germany, they were Minnesingers. All over, street performance has integrated itself into cultures around the world — Mexico, Russia, Japan, Italy.

Folk music has been a specifically influential aspect of the busking scene in more recent years. Famous folk artists like Joan Baez and Woody Guthrie would perform in unconventional locations, like bars, restaurants, and even the street. In the 1960s came the counterculture hippie movement, and with it busker-like festivals called “be-ins,” in which musicians would gather in public places and play for free. Artists like Janis Joplin, Jimi Hendrix, and the Grateful Dead engaged in this scene.

These current “COVID concerts” are a mark in the long timeline of street performance history. One such modern-day busker, the band Pinc Louds, has used their continued ingenuity to bring art to the masses during the pandemic. While part of busking is about making a living, at its core, it is about sharing and celebrating music, allowing everyone to revel in it. Tompkins Square Park has become their concert stomping grounds, bringing teenagers and locals to the park to sit or to dance while socially distanced and enjoy their music.

In an interview with AdHoc, a Brooklyn-based concert promoter and publication, Claudi Love (the lead singer of Pinc Louds), said “I feel more alive when I perform. I don’t know what I’d do if I couldn’t. Recording is all fine and dandy, but there’s nothing like playing live and seeing how people react; making people dance; making real human connections.” These connections have been few and far between during this period of the Coronavirus pandemic, so outdoor performance art has been a desperately needed refuge.

Pinc Clouds seemed to be the first band inching back into the outdoor performance territory during the summer months. Before that, though, they were finding other ways to bring music to the public (and to bring some income into their lives). For a while, their popular outdoor shows were performed inside Love’s apartment and disseminated through social media live shows.

Money has never been their primary focus, despite being a busking band. Their music and performance art is a way of bringing light and joy to themselves and to the listeners. So, when they were finally starting to experiment with outdoor shows again, it worked like a charm. The community responded enthusiastically to these shows in the park (with an audience made up of punk teenagers, families with young children, and East Village locals). The shows certainly were eclectic, and quite special.

There seemed to be a reciprocal relationship built between the band and their listeners. They were all there to feed off of each other’s energy and joy. “Pinc Louds and the subsequent tradition of concerts in Tompkins Square Park saved me this summer, as I think they did for so much of the East Village and the New York City community,” said Annabel Sexton-Daldry, a senior from East Side Community High School, who attended almost every single live show advertised in Tompkins Square Park this summer. “I felt energized by the special and wacky energy that these local artists have been able to conjure. I was able to dance freely in a time when everything feels so restricted. We all figured out how to have fun, safely, socially distanced, and still support one another and the music.”

Many musicians followed suit after Pinc Clouds broke the initial outdoor concert boundary. Clara Joy, Hello Mary, Dirty Circuit, and many other local artists joined in. “It felt like a much-needed celebration to be among all of these wonderful artists. It reminded me what it means to be a New Yorker,” said Sexton-Daldry. Pinc Louds and all of the artists, teenagers, and community members that have gathered together to make these shows happen have reminded us that New York’s community is still just as creative and connected as ever, even through the most isolating times.
A beautiful, albeit a bit awkward, sight is that of masked-up teenagers dancing while socially distanced in Tompkins Square Park. Knowing that people need art now, more than ever, local New York City musicians have worked hard over the past few months to rewire the way they imagine concerts. In a time of struggle during the global Coronavirus pandemic, music can make a quarantine more bearable.