Escape From Current Hell By Going To…Another Version of Hell? A Review of the Video Game ‘Hades’ 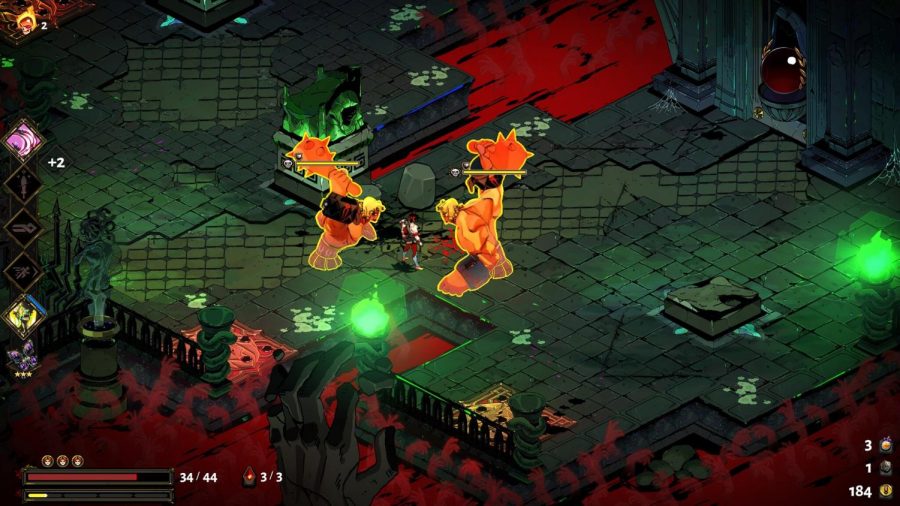 Some of the earlier levels of 'Hades' are not very difficult, as the common enemies are either slow high-damage dealers or fast low-damage dealers.

Everyone has heard something about Greek mythology at one point in their lives, whether it is the story of Zeus leading the charge against the Titans or the stories of brave heroes like Hercules and Perseus. Suffice to say, the legends and stories made by the ancient Greeks have made their mark.

However, this buzz always seems to center on the overworld’s legends, excluding the ever-present Hades. Nevertheless, for every thousand Hercules stories, there will always be one Zagreus story, a mythological character which ‘Hades’ by Supergiant Games puts forth front and center.

‘Hades’ is the newest game released by the indie game company Supergiant Games. The player follows Zagreus, son of the god of the underworld, Hades, in his attempt to escape to meet his olympian kin and later find his mother, Persephone. The game is a rogue-like dungeon crawler where the player goes from stage to stage fighting enemies while receiving extra powers. The catch is the player only has one chance to make it out to the afterlife. There is no re-spawning or checkpoints; instead, there is just a start, and an end. One fight from start to defeat or start to finish was dubbed a “run” by the gaming community early on.

To complete a “run,” there are four main bosses the player must face: the Furies (three goddesses of vengeance who attacked those guilty of wrong-doing), a skeleton of the Hydra (a multi-headed monster who was slain by Hercules, putting it in the underworld), Theseus and the Minotaur (Theseus being the founder of Athens and the one who slew the Minotaur, and the Minotaur being a half-human, half-bull monster), and finally Hades himself. In addition, many mythological references are made to minor gods such as Nyx, Hypnos, and Thanatos, as well as Greek legends such as Achilles, Patroclus, Medusa, Orpheus, and Eurydice.

To fight these bosses and the many monsters of the underworld, the player has a choice of multiple different weapons, weapon upgrades, and combinations of additional powers granted by the Greek gods. This allows for endless re-playability with an infinite amount of options. One could be crashing into enemies with the close-combat gauntlets, whirling out punches blessed with the powers of Poseidon and Artemis for one run, and fighting enemies from a distance with a long-ranged bow blessed with the powers of Aphrodite and Demeter the next.

One of the most popular ways to play Hades once you begin to understand the specialized powers is speed-running. Speed-running a game is when the player attempts to beat the game in the fastest time possible.

The game is not only just fighting monsters. A big part of the game is its story and interactions with other characters. For example, if the player completes the first part of the game by defeating the Furies, they travel to Asphodel, which is the hellish, lava-covered part of the underworld. There they may meet Eurydice, a helpful nymph who provides some nice upgrades to Zagreus’s powers. In addition, after defeating the boss of Asphodel, the Bone Hydra, the player may purchase the contract of Orpheus, a singer who had been wandering around Hades’s domain after he refused to sing in Hades’s court. As the player progresses and continues talking to Orpheus and Eurydice, they will learn that Eurydice is Orpheus’s lost wife and muse. If the player chooses to, they may complete a few tasks and allow Eurydice and Orpheus to be reunited.

Besides small side quests, the main storyline is also very intriguing and heartfelt. The story centers around Zagreus’s relationship with his father, Hades. Although, their relationship is less than stellar as Hades is forever the final boss of the game. Throughout the beginning of the game, Hades constantly berates Zagreus, but as the game progresses, we see cracks in his villainous persona. Each character, even without having an in-depth backstory or first-person view, seems to have their own dynamics. Many characters even question others, for example, the unknown cosmic entity, Chaos, constantly questions the other gods’ intentions.

Outside of gameplay, Hades’s visuals are amazing for an indie dungeon crawler. Each character has their own artwork, and many of the main characters also have changing expressions similar to a visual novel. The artwork for dialogue also reflects in the character models, which have their own subsequent idle animations. Additionally, the backgrounds and environments are stunning. The animations that are only for background visuals are unmatched even for games made by professional companies.

Besides artwork, the game features a variety of amazing soundtracks. Supergiant Games has been known previously for their game albums, having a mix of vocal tracks and atmospheric tracks. In Hades, Orpheus and Eurydice both have their own subsequent vocal tracks to match with their mythological counterparts’ roles as musicians. All of this music is produced by Darren Korb, who in addition to being the sound designer, is also the voice actor for Zagreus. Joining Korb for vocal tracks is a Supergiant favorite, Ashley Barrett, who sings the female parts of any vocal tracks for the company.