A World Record: The Most Expensive Tyrannosaurus Rex Skeleton Ever Sells at Auction 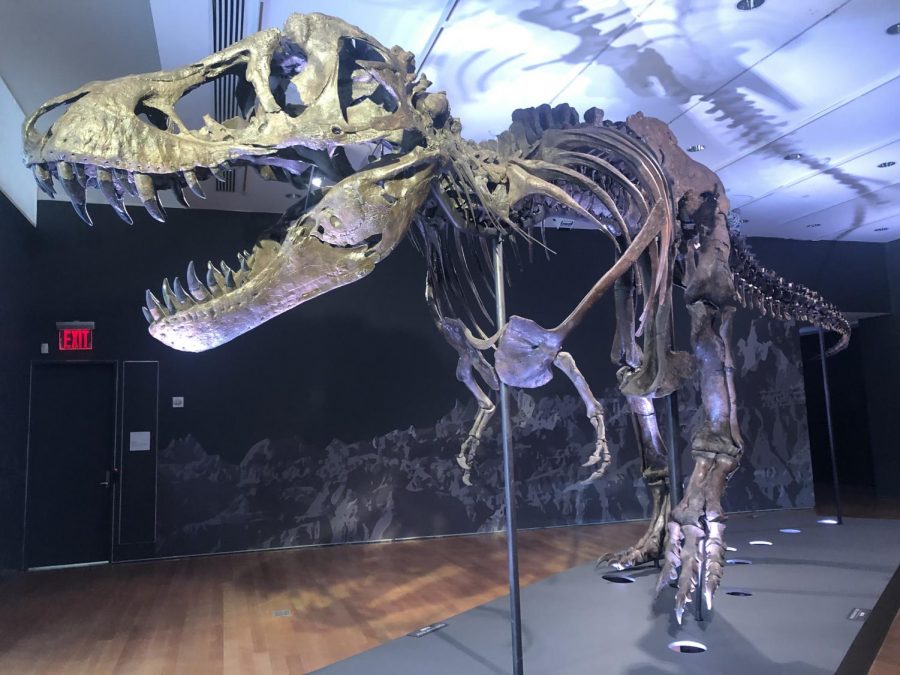 Stan’s skeleton is one of the most complete Tyrannosaurus rex skeletons ever discovered.

As October 2o2o and the exciting prospect of Halloween (even during the Coronavirus pandemic) gave people the excuse to unearth their spooky knick knacks from years prior and to decorate their otherwise pleasant homes with ghostly figures, one anonymous buyer went above and beyond in order to prove his dedication to the Halloween spirit. While some may have propped up fake skeletons outside their door or positioned them in their living rooms in order to give guests a fright, this buyer spent $31.8 million on a real Tyrannosaurus rex skeleton named Stan.

On October 6th, 2o20, a twenty-minute bidding battle unfolded, as Stan closed the Post-War and Contemporary evening sale at Christie’s auction house. With a starting bid of $3 million, the winning bid placed by James Hyslop on behalf of the buyer was $23.8 million more than the high estimate of $8 million, leaving Christie’s employees in an excited frenzy and with high hopes for their annual bonuses. Hyslop, the head of Christie’s Science and Natural History department, took part in the new world record, as Stan’s price topped all other dinosaur skeletons ever offered at auction. The previous record of $8.4 million was held by Sue, a Tyrannosaurus rex sold in October of 1997 by Sotheby’s auction house; Sue was acquired by the Field Museum in Chicago and is currently on display there.

Stan’s massive skeleton, dating from the late Cretaceous period, was discovered in 1987 by a paleontologist named Stan Sacrison, hence the nickname “Stan.” The finding was truly unexpected, as Sacrison had merely set out to observe various plants in South Dakota, when he stumbled across a large pelvis bone jutting out of a cliffside. First misidentified as a Triceratops, Stan’s true species was revealed when the Black Hills Geological Institute began an excavation in 1992, led by Peter Larson, a paleontologist who specialized in Tyrannosaurus rex skeletons.

Having been buried for 67 million years, Stan’s 188 fossilized bones are nearly flawless, and the preservation of his skeleton is a reflection of his steep price. Acquiring business became increasingly difficult for specialists due to the Coronavirus pandemic, and Stan now serves as a testament to the success that Christie’s continues to have in auction during this difficult time. “If you have something great to offer, collectors are willing to pay a premium [price] for it, even in the middle of a pandemic,” said Deepanjana Klein, the international head of the South Asian Modern and Contemporary Art department at Christie’s. Stan fetched a world record price even during a global pandemic, proving the art market is still strong and that collectors will keep on collecting, albeit over live online auctions while casting bids through the phone.

However, not all parties are thrilled by the recent auction. The scientific community and paleontologists in particular have valid concerns regarding the ancient fossil being sold to an anonymous buyer. One such concern is that the sale of an important fossil like Stan could potentially encourage fossils and future discoveries to be privately traded among collectors. Privately owning fossils prevents them from being properly preserved by scientists and shared with the general public in museums, as well as making them nearly unattainable to researchers who could obtain valuable information from studying the fossils.

Carl Mehling, a paleontologist from the American Museum of Natural History, shared his opinions on Stan’s departure into what could possibly be isolation from the general public. “I would prefer this to not go into a private collection…when fossils are in a recognized scientific repository, any qualified researcher can gain access to specimens for research. In a private collection, certain researchers could be blacklisted based on personality conflicts, and even all researchers could be closed out.” The worries multiply further at Stan’s price, since the chance that a museum could afford to spend that much money, especially during a pandemic, is highly unlikely. “If Stan were mine to do with as I pleased, I would probably put it on public display in a museum in such a way that researchers could easily study it,” said Mehling.

Despite the controversy, Stan has already been sold and did not come cheap. Whether he is now traveling to a museum or to someone’s personal collection remains unknown, but we hope that he receives the love that he deserves. “Walking in each morning into the galleries and seeing Stan was like being greeted by your pet dog as you came home at the end of the day. While his size was overwhelming, there was a part of me that believed that if I had a ball to throw, Stan would leap out of his stand and pedestal and go fetch,” said Klein.
“If you have something great to offer, collectors are willing to pay a premium [price] for it, even in the middle of a pandemic.”