The Metropolitan Museum of Art Reopens its Doors

See the new exhibit: 'The American Struggle' by Jacob Lawrence 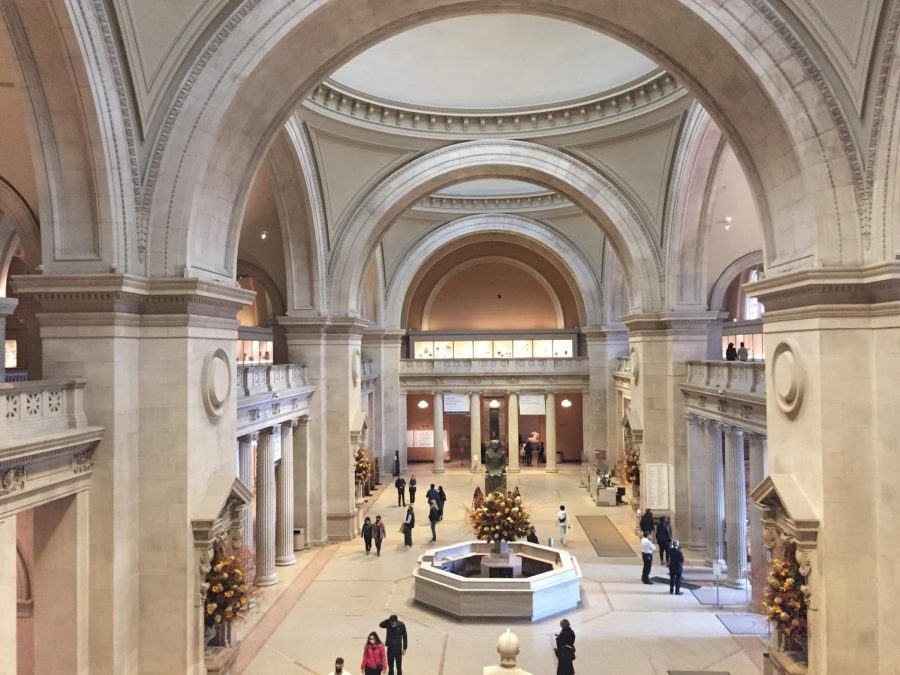 The Metropolitan Museum of Art's lobby is unusually empty for a Saturday afternoon. With timed tickets now required and one fourth of the usual museum capacity enforced, due to social distancing restrictions during the Coronavirus pandemic, the Met is now never crowded.

After having been closed for the longest period of time in its history due to the Coronavirus pandemic, The Metropolitan Museum of Art reopened its doors on August 29th, 2020. Museum-goers will find their visiting experiences to be different, as the museum, which traditionally boasts over 6.7 million visitors per year, has enacted new strict safety protocols in the midst of the Coronavirus pandemic. The Met museum has always been a unique experience for every visitor, whether you are a curious child on a school trip, a professional art curator, or anything in between. “I haven’t been to the MET in a while, but I still think it’s one of the quintessential New York museums. There’s always lots of important and great art to see, and a diverse and cool selection of exhibits,” said Declan Hilfers `22.

With the ongoing pandemic, the epicenter of New York’s cultural life was forced to shut down, causing over 150 million dollars in financial losses for the museum. To minimize COVID-19 infection risk as much as possible, the MET reopened with safety restrictions put into place, such as required mask wearing for all guests and a limit of five thousand people or less in the museum every hour. I visited the museum with the intent of seeing the effect of these new restrictions on the overall experience at the museum, but also so that I could visit their new exhibits.

Initially, I had expected that the change in atmosphere at the museum would be more noticeable, but save for the slightly smaller crowds and the new one-way signs directing the flow of visitors, nothing much had changed. After visiting the museum in September 2020, Sophia Randall `22 said, “It was the same museum as always, but there were a lot fewer people, so it actually felt quite empty.”

One of the new exhibits that has made the biggest splash with the media is Jacob Lawrence’s ‘American Struggle’ collection. The project had originally been conceived as a series of sixty paintings depicting key points in American history, from the American Revolution to World War I.

However, the Met’s exhibit only contains around thirty of Lawrence’s pieces, featuring various significant events in America’s creation’s history.  The collection specifically focuses on the struggles of marginalized people during those events, which is usually overlooked when not specifically discussing those groups.

Although Lawrence had intended for all the paintings to remain together, they ended up being separated and traveled between many different owners, causing some paintings to be lost to this day.

The first piece is the recreation of Patrick Henry’s hypocritical yet arousing colonial speech, “Give me liberty, or give me death.” The scene in the painting is chaotic, which resembles the tumultuous atmosphere that would have existed at the time of the speech; chaos was also present in general in the colonies at that time period. The drops of red paint in the right half of the painting may symbolize the bloodshed that was to come because of the colonies’ choice to fight back against the British.

The paintings move along in chronological order, exhibiting events that transpired during the founding of America, including very famous ones such as the Boston Massacre and Paul Revere’s ride, as well as lesser-known ones, such as the revolts of enslaved people, who were inspired by revolts against slavery in the Caribbean.

That painting shows the exceedingly clear contradiction between the colonists’ wish to be free from Britain’s rule and the colonists’ desire to maintain power over another group. The emotion shown in this specific painting is astounding and hard to describe, so I recommend going to visit the paintings for yourself.

In the exhibition room itself, two men were talking about why they decided to visit Lawrence’s collection. “I read that it caused a pretty big stir because this lady found one of the paintings in this exhibit that’s been missing for decades,” said one of them. Apparently, after visiting the collection at the MET, a lady remembered a similar painting that she had seen in a neighbor’s apartment. The neighbors had purchased the painting from Lawrence for a small fee in order to benefit a charity. The MET bought the painting back from the couple, and it is now hanging with the rest of the recovered paintings from the collection.

The line to see the collection was about an hour-long and traveled through multiple rooms, so I was able to take in many other works while waiting. One of the most striking pieces was a portrait called “Annette, the Artist’s Wife,” by the Swiss sculptor, Alberto Giacometti, who spent his career working in Paris, France.

Giacometti’s statues are well-known around the world, although he never considered any of his projects to be “finished.” In this monochrome painting of his wife, which may seem to have been hastily made at first glance, the true intensity of the sculptor reveals itself with an expressive yet simple subject and also an even more expressive background.

Across the room from the portrait, three tall, skinny, and ghostly figures stand around in a circle atop a table. This is Giacometti’s ‘Three Men Walking II’. Giacometti carved these statues modeling ones that he had made during Although it is unknown precisely what Giacometti wanted to convey, as is the way with most pieces of art, it is easy to see that the gaunt statues were made as some sort of statement on the human condition.