Virtual Concerts to Enjoy From Home During the Coronavirus Pandemic 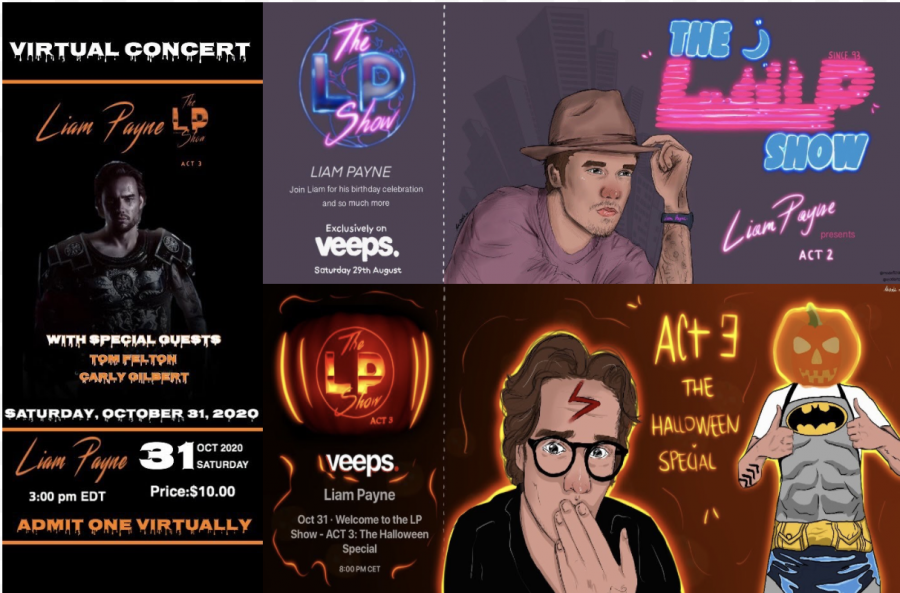 Some fans even made their own concert tickets to prepare for the virtual show.

Amidst the novel Coronavirus pandemic, musical artists and their crews have lost the ability to perform in what is arguably one of the best parts of their jobs, concerts and tours. At this time, concert venues ranging from the smallest halls to the largest stadiums are not suitable for any performances with an audience, due to the risk of contracting COVID-19 in indoor spaces with groups of people.

In response to this unprecedented situation, many musicians have put on virtual concerts over the past few months, with varying degrees of success. Below is a retrospective guide of performances by K-pop groups, hip hop singers, indie artists, and more.

The LP Show Act 1, was promoted on all of Liam Payne’s social platforms on July 8th, 2020. While Payne performed at out-of-use venues (due to the Coronavirus pandemic shutting down public gathering places) with a live band, largely made up of BIPOC, and professional sound and lighting engineers, viewers could watch the whole performance from home.

The tickets started at ten dollars and could be purchased on veeps.com. And an added benefit to the low price was that a portion of the first show’s ticket proceeds went to The Trussell Trust, a nonprofit organization that supports food banks all across the United Kingdom. The more that you paid, the more you donated, and if you paid $125 or more, you could have even received a special bundle of merchandise!

Each of the three shows that Payne put on had their own special moments. The setlists were on the smaller side (ten to fourteen songs), but his references to the live chat where he would answer questions and talk about old pictures from his teenage years in One Direction helped fill in the hour-long live stream.

Viewers who paid more for the tickets were able to take part in a special Zoom meeting after the show and talk to Liam Payne directly. This continued into the second show, which actually took place on his birthday. This time around, Payne had a supporting act at the beginning of the show, Mae Muller, and a lot of special guests and surprises at the end of the show. One was a performance of ‘What A Feeling’ from One Direction’s fifth album, which had never been performed before!

The final show took place on Halloween and included multiple performance settings in one location. The setlist included songs from Payne’s own LP1 album, Billie Eilish’s WHEN WE ALL FALL ASLEEP, WHERE DO WE GO? album, and 5 Seconds of Summer’s Youngblood album. Payne dressed up as Jack Sparrow, the famous main character from Pirates of the Caribbean, and held contests to give back to his fans. The few winners of the costume and makeup contests would each receive $1,000.

The fans truly gained a lot from the show: hilarious content from Liam Payne, multiple live streams before and after the virtual shows, and various items of special merchandise.

Earlier in the summer, BTS’s management company organized Bang Bang Con: The Live on YouTube, an event where fans could watch old concert footage. This was the perfect pandemic musical opportunity for those who were willing to pay for exclusive content to enjoy watching their favorite artists perform. While tickets were around thirty-five dollars, the live stream was ninety minutes long and allowed viewers to connect with the members of BTS to celebrate the group’s seventh anniversary.

On the weekend of October 10th and 11th, 2020, the K-pop group launched the BTS Map of the Soul ON:E Concert. Tickets started at around forty-three dollars, and the price increased if you bought tickets for both days or for the exhibition. The exhibition was a special 3D virtual space for ARMY (the BTS fanbase) members to enjoy a variety of exclusive BTS content ranging from behind-the-scenes videos to never-before-seen clips.

Billie Eilish held a special virtual live stream concert called “Where Do We Go? The Livestream” appropriately named after her album. Tickets were thirty dollars each, which is on the pricier side of these virtual pay-per-view streams, but a portion of the merchandise proceeds was donated to Crew Nation (an organization that helps crew and tour members who have been affected by a lack of income due to the pandemic).

Haunting visuals played throughout the thirteen song setlist. They spanned from an encroaching spider’s silhouette in the background during ‘you should see me in a crown’ to a somber cartoon forest during ‘my future’. Eilish was joined by her brother Finneas and drummer Andrew Marshal on the empty stage. Occasionally, viewers on zoom would show up on the surrounding greenscreen and replace the visuals. Between songs, the young singer continually pressed viewers to vote in the election; she rounded out the show with a rendition of her award-winning ‘bad guy.’

While artists like Billie Eilish felt comfortable performing on their own with no audience, some musicians needed the fans’ energy to escalate the performance. Liam Payne substituted the cheers that would normally echo around a stadium with manual clapping and cheering tracks. However, Lil Uzi Vert had to make do with no audience input at his virtual concert.

The circular stage and space-centered imagery stayed true to his Eternal Atake album art. He started the show with a lot of energy, as one would expect from Uzi, but after a couple of tracks, the awkward isolation was apparent. Yet, he continued to jump around on stage and push through the challenging environment.

For fifteen dollars, the forty-five-minute performance was worth it because it provided a quick zap of endorphins to the viewers due to Uzi’s high energy performance. With a whopping nineteen track setlist, the concert covered a lot of Uzi’s discography, but in no way did the virtual show substitute a real concert. Uzi showed his frustration with the lack of in-person performances between songs, but ended the show by putting down his mic and dancing at the end of “Futsal Shuffle 2020.”

Earlier in the summer, the band The Wallows decided to stream a series of concerts. There were a total of four shows with a different setlist for each one. Tickets were fifteen dollars for each show, but fans could purchase tickets for all four shows for fifty-five dollars. The band labeled the live stream concert as the ‘Virtual World Tour,’ and its first show was the ‘West Coast Show’ on August 16th, 2020. Over the span of a month, the band would release each show that was filmed at The Roxy.

Fans could choose their favorite songs, and then the band would choose the top fifteen to perform on the second night of the concert. The third concert’s setlist was handpicked by the members of the band as if it were a normal concert. The last concert has a mix of the band’s classics, “essentials” (as they put it on Instagram), and never before performed songs.

On November 7th, 2020, Niall Horan performed from the Royal Albert Hall. It is a beautiful circular theatre with luxurious red seats, setting the mood for Horan’s first time performing album tracks from his sophomore album Heartbreak Weather. Instead of having one time when everyone in the world can tune into the show, Horan had four different time accommodations for fans everywhere. All the profits was shared among the members of Niall’s touring crew, who are currently unable to work, and the #WeNeedCrew relief fund. #WeNeedCrew is a recently launched hardship fund created especially for live music touring crews to support them in the wait to go back to touring.

Tickets ranged from sixteen to twenty dollars depending on your Spotify early eligibility options. Horan opened with the solemn song ‘Dear Patience,’ as a nod to all the viewers at home patiently riding out the quarantine. He then transitioned into the dynamic ‘Heartbreak Weather’ track, which is the opening track for his second album. Donning a multi-patterned pair of pants, Horan seamlessly alternated between singing his solemn ballads and more rockier-sounding songs like ‘Small Talk’ and ‘Nice to Meet Ya.’ He also had a surprise guest, Ashe, come on stage to perform the song ‘Moral of the Story’ that Horan featured earlier this year.

After initially alerting Spotify fans about the best “live stream performance of all time,” Lil Yachty shared his ‘The Night is Young’ virtual concert experience on Instagram. Marketed as a housewarming party, the virtual concert’s promotion entails a video of the artist inside of a video game-esque playhouse talking to various animated versions of himself. After being faced with daunting goat-shaped and troll-shaped animated beings, Lil Yachty submits to the peer pressure and announces the November 12th, 2020 live stream at 9:30 pm EST. He hinted at some guest appearances, but a lot of the show is being kept under wraps. Tickets start at fifteen dollars, which Mithila Dey ’21 found surprisingly cheap but also understandable since the concert is online.