With the Coronavirus pandemic limiting in-person interaction, thousands of students flock to Minecraft every day in order to indulge in exciting game play and to explore fantastical worlds with their friends. 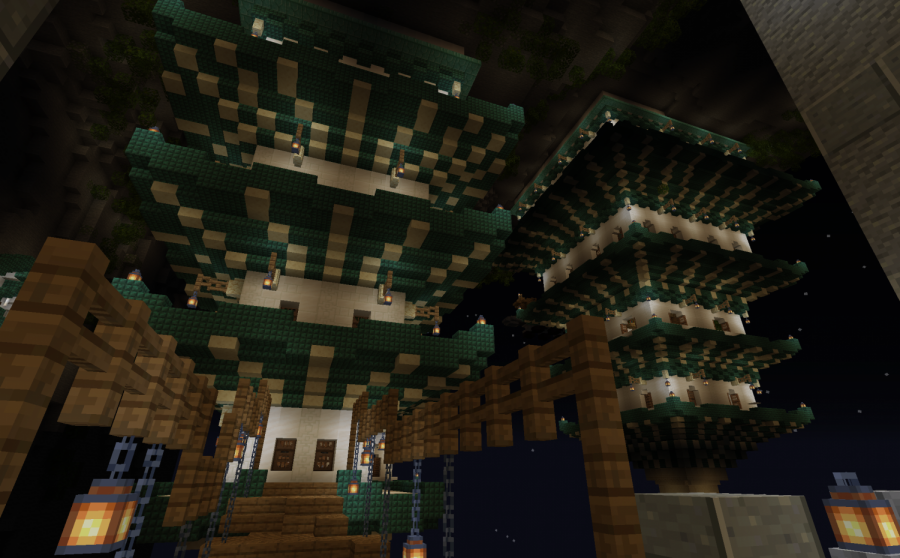 The Western Air Temple on the 4Nations Minecraft server, only accessible by Airbenders. Like the numerous other locations on the server, it is like a museum for players to enjoy, where they can relax and take in the gorgeous scenery.

Mojang Studios, the creator of Minecraft, one of the world’s most popular creative open-world adventure games, has finally announced its new 1.17 Caves and Cliffs update! This is said to be their biggest launch yet, and it has millions of users at the edge of their seats. This release will include upgrades to the vast cave systems and create a more thrilling experience with new mobs, spikes, falling stones, and lush caves filled with flowers and vines.

Another important feature coming along with the update is the addition of axolotls as a friendly mob. Adding axolotls is a huge step for environmental conservation as they are a critically endangered species of amphibians native to Mexico City. They are dying out due to invasive species and pollution, and they are predicted to go extinct within the next ten years if we cannot save their habitat.

Having axolotls in the game has created a lot of buzz around the adorable salamanders, and it is raising awareness about their dire situation. Since the announcement of the update, thousands of posts have since been made about axolotls on social media with hundreds of thousands of likes and comments. Many people who have never even heard of axolotls are now contributing to their revival and preservation, and all because of a video game update.

Minecraft is not just a video game, it is a community that brings people together. While it can be played individually, it can also be played with friends in private worlds, or with hundreds of other players via public servers. While some claim that Minecraft is a game of the past and has no place in the modern era, this is simply untrue, as millions of people enjoy the game every day.

It is the perfect medium for spending time with your friends and meeting new people, especially during this time of social distancing and quarantine due to the Coronavirus pandemic. There are endless servers and games such as Bedwars, Skyblock, Masterbuilders which require teamwork and analytical thinking. These activities create lifelong friendships founded on trust. These communities can even be found on YouTube where hundreds of people collaborate to make jaw-dropping constructions or simply fight monsters. “I love watching Youtubers play [Minecraft] because it’s entertaining seeing how they can hang out within it and create games that I never would have imagined,” said Naushin Sakirah ’22. Minecraft creates so many opportunities to make meaningful connections with others, bringing joy to all who play it.

There are so many different ways to play Minecraft, making it all the more suitable for people of all ages and backgrounds. Do you like PvP (player versus player) and battling others online? There are servers for that, or maybe you want to build a replica of world monuments on your own; there are settings for this too. Or perhaps, you want to experience your favorite childhood T.V. show in a new interactive medium where you can finally live out your dreams as that character. The list of possible servers goes on and on!

BendersMC is an Avatar: The Last Airbender themed server where players can ‘bend’ an element of their choice. Doubling as a faction server, players in the Benders MC can create bases and raid each other in pursuit of more land and power.

The highlight of this server, however, is undoubtedly its builds, which include famous and iconic structures from the Avatar: The Last Airbender. The most impressive builds are Uncle Iroh’s tea shop and the “pro-bending arena” based on The Legend of Korra, a T.V. sequel to Avatar. The server even hosts weekly pro-bending matches in the arena, where water, fire, and earth benders can battle while fans cheer them on from the stands.

Sophia Randall ’22, who plays on BendersMC almost every day, described the pro-bending matches as one of her favorite parts of the server. “I love the fast-paced fighting that happens every week during pro-bending, and I can’t wait to one day join a tournament!” Randall said. She also enjoys the factions aspect of BendersMC. “It’s a lot of fun to build houses to store my gear in between battles. I recently built one of my favorite bases, and I lived in it until it was tragically obliterated by user NickimanajRP,” said Randall.

Another new, widely-beloved Minecraft server is MCParks, modeled after the real-life Disney World, Disneyland, Universal Studios, and Busch Gardens theme parks. MCParks contains functioning replicas of the attractions that players can ride, either in groups with their friends or by themselves. When visiting this server, one can clearly see the time and effort put into making it realistic, making the experience all the more enjoyable. MCParks has been especially popular during the quarantine, as it allows people to virtually visit such a beloved place.
“It’s a lot of fun to build houses to store my gear in between battles. I recently built one of my favorite bases, and lived in it until it was tragically obliterated by user NickimanajRP,” said Sophia Randall ’22.