Why You Should Watch ‘Brooklyn Nine-Nine’ 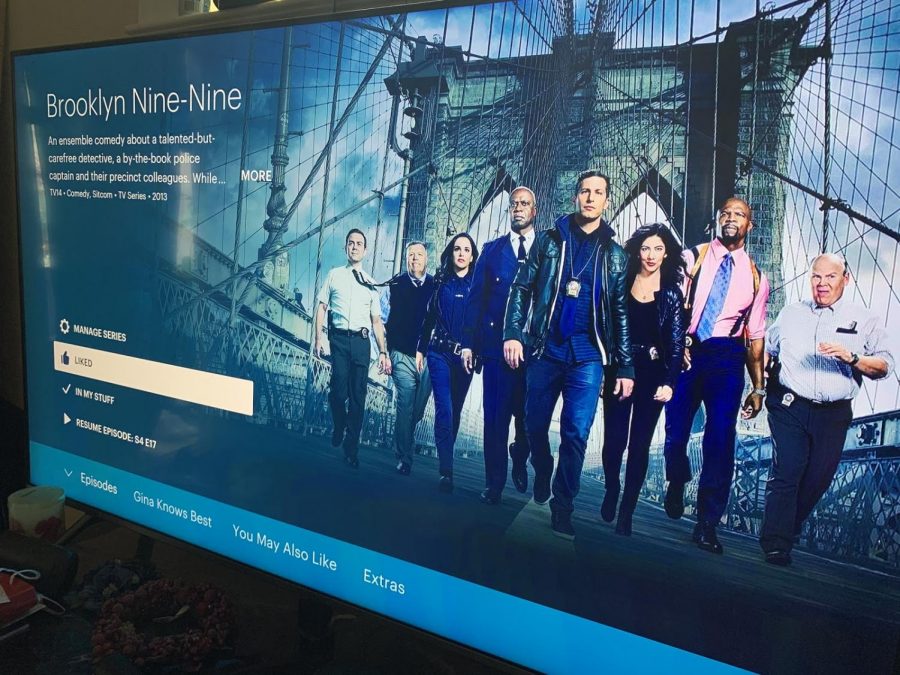 Detective Jake Peralta and Captain Raymond Holt’s banter is a staple in 'Brooklyn Nine Nine.' With Holt’s deadpan humor, and Peralta’s childish antics, you are almost always guaranteed a smile on your face or a laugh.

If you’re looking for a new show to watch during quarantine and the time of the Coronavirus pandemic,  you could try watching Brooklyn Nine-Nine.

Brooklyn Nine-Nine is a sitcom that centers around a fictional police precinct in Brooklyn—more specifically, its detectives that work to solve crimes and serve justice to criminals. The show is full of wonderfully written characters that each add an important aspect to the storyline’s plot. Jake Peralta, the main character played by actor Andy Samberg, is initially characterized as a childish detective, often up to no good. However, as the show progresses, his personality develops to show a loyal side. You also get to follow his emotional growth, from the realization that his initial behavior stems from lack of parental supervision to his self-acceptance and dedication to his job.

Another key character is Amy Santiago (played by Melissa Fumero), the super perfectionist and dedicated detective, and Rosa Diaz (played by Stephanie Beatriz), the detective who hides behind a mask of mystery. The iconic Gina Linetti (played by Chelsea Peretti) is also a standout; she seems like a shallow, self-absorbed office manager at first, but is actually able to read people extremely well and has overflowing confidence. “The English language can not fully capture the depth and complexity of my thoughts, so I’m incorporating emojis into my speech to better express myself. Winky face,” she said in Episode 22 of Season 1.

Additionally, there are Scully and Hitchcock (played by Joel McKinnon Miller and Dirk Blocker respectively) , the duo of detectives known for their unproductive behaviors, Charles Boyle (played by Joe Lo Truglio), Jake’s loyal friend, and Terry Jeffords (played by Terry Crews), the precinct’s lieutenant. None of these characters are one-dimensional. They each have aspects of themselves that are revealed little by little throughout the show that make them seem genuine and relatable.

Not only does the show have wonderfully written characters, but it is also genuinely funny. Unlike many shows that are currently popular, Brooklyn Nine-Nine does not depend on stereotypes to create humor. Instead, it makes use of the characters’ personalities and actions to entertain viewers. With the ongoing characters’ development, their personalities and stories are often changing, which makes the show so fresh all of the time.

Many students at Bronx Science are avid fans of this show. “I would recommend Brooklyn Nine-Nine, especially during this time of distress, because this show is extremely wholesome and uplifting. No matter who is watching this show, they would be able to relate to some aspects of the characters, because the writers do not put up a facade for each character. They’re openly flawed, and are vulnerable to themselves, other characters, and to their audience,” Jessica Lin ’20 said.

There is an amazing amount of representation, with people of all different races and ethnicities, and different sexualities. It is possibly one of the most progressive shows out there, and one of the leads is an openly gay, black police captain of the NYPD—Captain Raymond Holt, played by Andre Braugher. His struggles of being a detective in the late 1980s is constantly brought up throughout the show, especially due to his race and sexual orientation, but those do not define his entire character. Instead, he is showcased as a captain who genuinely cares for his precinct, and who works hard to protect his detectives. Additionally, Rosa Diaz comes out as bisexual in the 99th episode of the show, reflecting Beatriz’s sexuality (since she is also openly bisexual).

Lastly, the show discusses many real-life issues such as racism, homophobia, sexism, toxic masculinity, and police brutality. We see Terry getting stopped by the police for simply walking on the streets because of his race, but we also see him being a loving and caring father despite his traditional masculine appearance. His fear of being active (involved in the physical aspects of a case, such as chasing down a perpetrator) stems from his fear of abandoning his two twin daughters, which in no way strips away his masculinity. There are many other examples involving other characters throughout the show — you’ll see if you watch it.

Even though this show has 7 seasons, it has never strayed from its roots, and the writers stay true to the essence of the show. It is highly loved for a reason, with its 97% rating on Rotten Tomatoes—its ability to touch up upon progressive issues, while still being able to make its audience laugh every single episode, is one you should truly not miss.

NOTE: This article was planned and written before the death of George Floyd and the ongoing BLM protests. In no way am I trying to promote police propaganda; despite this show being about a fictional police precinct that tries to adhere to the “ideal” police image, it still brings up issues about corruption within the police department and racial bias among the police. The writers are remotely writing season eight due to the Coronavirus pandemic, and many people are insisting on social media that they should at least acknowledge these current events. Here’s an article that mentions the writing of the new season here. If you are uncomfortable with the positive portrayal of detectives that are part of the police department, then it is best to not watch this show.