The Science Survey • May 15, 2020 • https://thesciencesurvey.com/arts-entertainment/2020/05/15/the-latest-fantasy-a-review-of-final-fantasy-vii-remake/

The Latest Fantasy: A Review of ‘Final Fantasy VII Remake’ 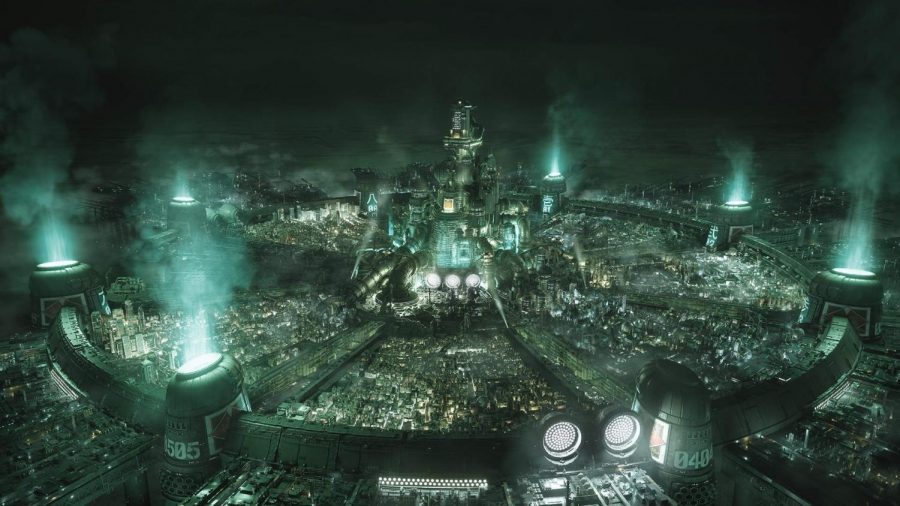 The sprawling industrial city of Midgar has been fleshed out in FF7R’s extensive new map.

Originally released in 1997, Final Fantasy VII (FF7) has since become one of the most celebrated and well-loved Japanese role playing games (JRPGs) in history. From a company whose releases are filled with remakes, remasters, and DLC, which has both frustrated and pleased fans over the years, it is no surprise that an updated version of its most popular game was in the cards. A combination of the classic Final Fantasy story and Square Enix’s current animation capabilities would inevitably appeal to older fans of the franchise, and engross a whole new generation in the tale that attracted so many players twenty years ago. And, judging by the 3.5 million copies sold within three weeks of its release and the numerous records that is has broken so far, that has proven to be true.

Announced at E3 in 2015, the Final Fantasy VII Remake (FF7R) has been long anticipated – and much feared. Many worried that the game would simply be another version of FF7, only upgraded with Square Enix’s much improved graphics. However, these fears were quelled as new information was gradually released regarding the game. This news was both promising and somewhat frustrating: much more attention would be given to underdeveloped locations and characters, but the story itself would be broken up into multiple episodes, released on a staggered schedule. The first disc covers only about a third of the story, indicating that there will likely be two more installments released to encompass the entirety of the original plot.

Having personally played both games, the differences are immediately apparent. Characters who in the original FF7 received very little screen time, such as Jessie, Biggs, and Wedge, are thrust into the spotlight early on, fleshed out with personality and plot relevance that lends a much heavier weight to events that play out later on in the game. This is achieved through the addition of many side quests and a new boss, which adds a fun twist to a more monotonous section of the beginning of the game.

In addition, the city of Midgar and the slums beneath it are beautifully rendered, full of unique events that allow the player a better understanding of daily life under the Shinra Electric Power Company, a massive corporation that supplies the people with a destructive and draining power source called mako energy, and has boundless influence in many other spheres of daily life. The quests, which range from tracking down lost cats to fighting massive beasts, allow the player to develop main character Cloud Strife’s fighting abilities and his relationships with other characters, which can be done by completing as much of the optional content as the player chooses.
The devotion to making FF7R a new experience rather than simply a reboot is visible throughout the game’s main story.
The game mechanics, especially its new fighting system, contribute greatly to the fluidity of the rest of the playing experience. Instead of the classic turn-based combat of the original, Square Enix has elected to upgrade to a real time system in which the emphasis rests on timing and strategy. The gauge that enables players to use magic, items, and other abilities takes time to load, which requires that players make more thoughtful decisions about when to use which item. However, should the player want a more nostalgic experience, there is also a classic mode that resembles more closely the original. In addition, there is both an easy and normal mode available to players, and a hard mode that unlocks once the game has been completed.

The devotion to making FF7R a new experience rather than simply a reboot is visible throughout the game’s main story. For those who have played spinoffs of the original game, most importantly Crisis Core, hints suggesting changes in the late game’s events abound. The main villain, Sephiroth, also appears much earlier, which lends him more narrative importance and casts a shadow across even the happier moments in the beginning of the game. Additionally, classic moments such as the iconic journey to mafioso Don Corneo’s den of iniquity are expanded upon and filled out with more quests and fun tasks to complete.

The main cast, in particular Aerith Gainsbourg, Tifa Lockhart, and Barret Wallace, have more interactions with each other and with Cloud, which gives Avalanche – the organization fighting against Shinra’s draining of the planet’s resources – a more cohesive and enjoyable team dynamic. This not only makes adventuring around Midgar more fun, but quickly encourages the player to care about the group, which in turn makes heartbreaking moments later on in the narrative all the more painful. FF7R does not pull its emotional punches. The updated dialogue and animation makes the characters even more endearing, and foreshadowing suggests that future installments will not spare players from the heartbreak induced by the original, though various easter eggs imply that perhaps it will be delivered in a different way.

All in all, FF7R was an extremely enjoyable experience. From start to finish, it engages the player with its likeable characters, beautiful animation, and concise gameplay style. Despite being a remake, it is clearly different from the original in meaningful ways, and intends to diverge further to create a refreshing experience in future games. As director Tetsuya Nomura claimed, it is not intended to be a replacement, but rather a new exploration of the classic game that captured people’s hearts globally. Met with widespread critical acclaim and success, players across the board have only one major complaint about FF7R: when’s the next one coming out?!