The Science Survey • May 11, 2020 • https://thesciencesurvey.com/arts-entertainment/2020/05/11/why-you-should-be-playing-dungeons-dragons-during-quarantine/

Why You Should be Playing ‘Dungeons & Dragons’ During Quarantine 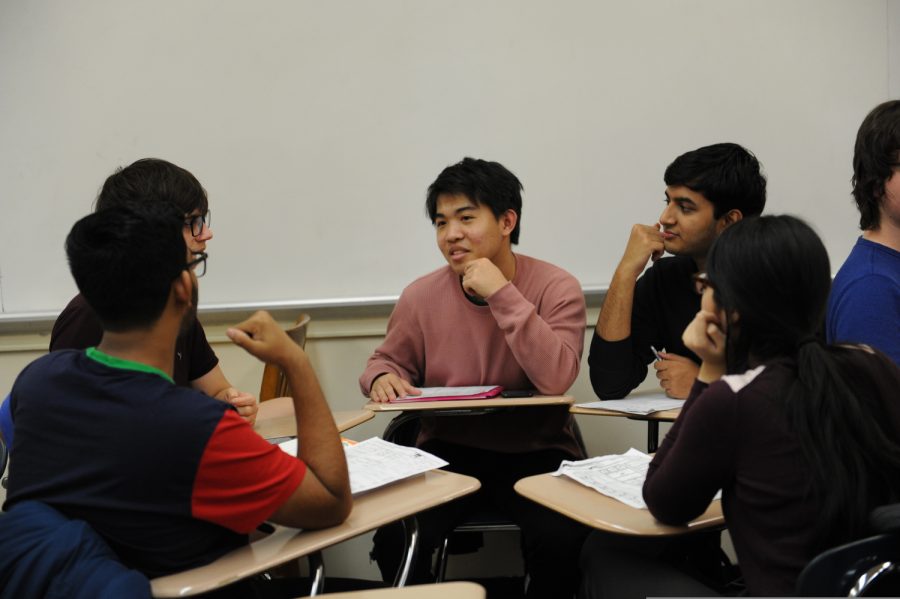 Students from the Bronx Science 'Dungeons & Dragons' club are discussing game strategy during a club meeting earlier in the 2019-2020 academic year.

Picture this: you find yourself at the entrance of a cave where the back of the tunnel is pitch black and full of hidden entities. Arrows, broken spears, and shredded armor are scattered across the floor, only enhancing the grim scene. Your thoughts are interrupted as a roar erupts from the back of the cave. You rush in only to be stopped as the giant frame of a golden dragon comes into view. Now it is time to “roll initiative,” as any Dungeon Master of the acclaimed table-top game ‘Dungeons & Dragons’ would be saying.

Many people have become familiar with the name ‘Dungeons & Dragons’ through the internet, and the game is renowned for the incredibly passionate culture that surrounds it. While this is very true, the concept around ‘Dungeons & Dragons’ is not necessarily aimed towards your stereotypical know-it-all. The game revolves around making stories with characters, quests, overarching plots, and combat. Think of it as acting out a novel. There are two major roles: the storyteller, better known as the Dungeon Master, and the characters, otherwise known as the players.

While ‘Dungeons & Dragons’ has always retained a form of cultural relevance, in the last five years there has been a major spike in popularity. This can be attested to more media attention drawn to the game by shows such as ‘Stranger Things,’ although the more impactful platform was ‘Critical Role,’ a livestream show where voice actors come together to tell vast stories. Now is a better time than ever to get into ‘Dungeons & Dragons’ as a golden age of new enjoyable content continues to flow in.

Normally one would play ‘Dungeons & Dragons’ in person, meeting together to roll dice and talk face-to-face, but with quarantine, the concept of group games with friends in person has been canceled due to social distancing guidelines in effect to prevent the spread of the Coronavirus. However, social distancing has not stopped fans from playing. Many have moved to playing online though video platforms. Newer players with more time on their hands are also finding ways to learn how to play and eventually host games through social media platforms such as Discord.

For anyone who has never seen or tried the game before, now is the perfect time to flex your creative muscles and get into some ‘Dungeons & Dragons.’ The game allows you to both relax, and prevents you from falling into a trap of boredom. The main feature of the game is to promote creative thinking, whether you are writing out a huge plot twist or developing a battle strategy with your fellow players.

Online sites such as DNDBeyond and Roll20 are easy ways to play ‘Dungeons & Dragons’ online, with easy user interfaces as well as helpful videos demonstrating how to play. The books that one would normally use to play are also easily found online, with many pre-made games that a Dungeon Master could read from without having to put in too much work. Nothing is limited in this game, and if you look in the right places, there is no paywall either.

Overall, I highly suggest bringing ‘Dungeons & Dragons’ or other table-top games into your weekly activities. Once you get the gist of the game, you will be begging for the next session to start sooner.
While ‘Dungeons & Dragons’ has always retained a form of cultural relevance, in the last five years there has been a major spike in popularity.