The Science Survey • May 11, 2020 • https://thesciencesurvey.com/arts-entertainment/2020/05/11/some-positivity-during-a-time-of-panic-john-krasinskis-some-good-news/

Some Positivity During the Coronavirus Pandemic: John Krasinski’s ‘Some Good News’ 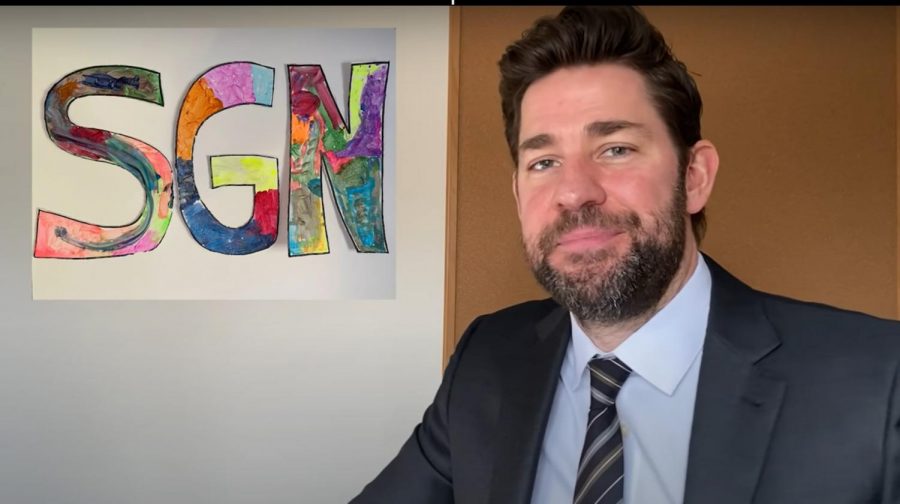 John Krasinski started his news show, 'Some Good News,' with the aim to spread positivity. Here, he is about to do a segment in which he surprises a fan with a zoom call.

Recently, the Coronavirus pandemic has dominated the headlines. Although it is important to learn about updates, anxiety levels have been shown to increase with one’s constant exposure to coronavirus news. The Centers for Disease Control (CDC) recommends that to reduce anxiety, one should “take breaks from watching, reading, or listening to news stories, including social media” because “hearing about the pandemic repeatedly can be upsetting.” While the CDC suggests listening to the news less during this pandemic, some news programs, such as ‘Some Good News’ by John Krasinski, should get a pass.

Those who are familiar with John Krasinski know him as Jim Halpert in ‘The Office,’ one of the most acclaimed comedy shows of all time, or as Jack Ryan in Tom Clancy’s ‘Jack Ryan.’ With a goal to spread positivity during moments of unease, he created the ‘Some Good News’ show on YouTube. The first six episodes are up on YouTube and have accumulated over fifty-two million views in total as of the date of this publication. Stuck in quarantine like the rest of us, he made his own low-budget news show. He uses his camera and sits in a well-lit area. Behind him is the colorful news logo made by his daughters. And although relatively new, the show has gained just as much attention as mainstream news outlets. In fact, Some Good News has an average of 7.73 million viewers across all six episodes, which is higher than the average viewership for the CBS Nightly News, with 6.7 million average viewers.

In the first episode, he describes his main motivation for starting the show. “For years now, I’ve been wondering why is there not a news show dedicated entirely to good news?” With the help of his followers on Twitter, Krasinski was able to put together heartwarming stories about people helping out one another in tough times.

The show does not lack for celebrities or big-name brands. One of the episodes features healthcare workers at Krasinski’s local hospital, being surprised with tickets to the Boston Red Sox games for life. In the same episode, AT&T announced that they were giving free phone service to all healthcare workers for three months. A nine-year-old girl who missed out on the Broadway show ‘Hamilton,’ received a virtual show of ‘Hamilton’ over a Zoom call. In episode five, fans submitted their quarantine recipes in the virtual potluck segment for the show. The recipes that were the most popular were recreated by famous cooks. For instance, Martha Stewart enjoyed following a fan’s recipe for pierogi. David Chang and Guy Fieri indulged in as well. Krasinski’s show is laden with celebrities, such as Oprah, Brad Pitt, Steve Carell, The Jonas Brothers, his wife Emily Blunt, and more. In trying times like these, the show is certain to bring a smile to many people’s faces and ease the pent-up anxiety from watching the Coronavirus numbers rise on the news.

Another reason for this show’s success might be due to John Krasinski’s special ability to understand what people are feeling. He is aware that they are missing out on weddings, anniversaries, and other important events. With his optimism, he tried to make it up to the Class of 2020 by giving them their own virtual prom. Many famous artists showed up, like The Jonas Brothers, and Billie Elish along with her brother Finneas. High school seniors from all around the country dressed up in their prom attire and celebrated their special night online.

Some Good News is a heartwarming news show in which you can indulge in order to to put your coronavirus anxieties at ease. With a new episode airing every Monday, the show serves as an important reminder that there is still good in the world, and that people are spreading positivity through times of uncertainty and confusion.

The show serves as an important reminder that there is still good in the world, and that people are spreading positivity through times of uncertainty and confusion.