The Science Survey • May 9, 2020 • https://thesciencesurvey.com/arts-entertainment/2020/05/09/sweet-times-making-desserts-during-quarantine/ 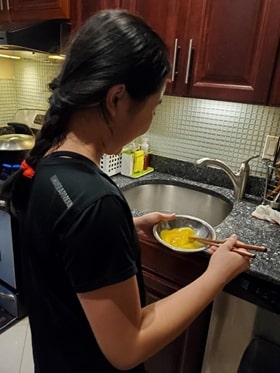 Beating the eggs using her chopsticks, Julie Lin '21 prepares to make egg custard. “I honestly thought that I would mess them up completely because I make tons of mistakes in the kitchen, but my mom swooped in to save the day,” Lin said. Once finished, Lin shared the egg custards with her siblings and mother. “My brother ended up trying it out too, which was amazing since he’s pretty picky,” Lin said.

While in quarantine, many students have been baking in order to pass the time and to de-stress. With a growing number of coronavirus cases every day, New York City is going through a stressful time. “There is the constant fear that clouds the uncertainty. When will this ever end? How will we recover?” Jenny Zheng ’20 said. According to Christine Li ’20, baking sweets helps her to calm down. “Whenever I’m stressed, I like to make something chocolate-y, something sweet,” Li said.

For some, baking is a family bonding opportunity. “My mom and I don’t usually get to spend a lot of time together, but for the first time in a while, we got to do something that we both enjoy,”  Anas Chowdhury ’20 said. The two hours spent baking a simple cake together was not only a new, enjoying activity for the Chowdhurys, but also a time to check up on each other’s mental health.

For special events like birthdays, many have resorted to baking their own celebratory goods. “Since many local bakeries are closed, I made my own lemon cake to celebrate my 17th birthday,” Vanessa Fang ’21 said. Fang usually buys her birthday cakes, but took it upon herself to try out recipes that she found online. “Getting to taste a successful attempt of an online recipe is super exhilarating. During quarantine, I’ve been able to practice making macarons. I look forward to sharing them with everyone soon,” Fang said.

Online education is not limited to school coursework of course, and it can be applied to learning new recipes. Some students have taken this time to practice online recipes and share them with the student body. About a month into online courses, Tyler Pelayo ’20 shared a carrot cake recipe that he found last summer from a baking website, called ‘Live Well Bake Often,’ on the Bronx Science Facebook page. Pelayo used to bake for his friends while school was open and after seeing a Wolverine TV episode that showed people cooking, he wanted to continue sharing his baked goods. Pelayo even filmed a clip for the ‘Wolverine TV Quarantine Edition Episode 8’ where he baked his blondies. “It would be awesome for others to share their recipes!” Pelayo said.

Others have been experimenting with newly discovered recipes, adding their personal touch. Britney Ng ’20 found a recipe for matcha mug cakes online and then started substituting the matcha powder with other ingredients, such as bananas. “It was so easy to make. All I needed to do was to put it in the microwave for five minutes, so I tried making another mug cake, but with bananas [instead of matcha],” Ng said. She found the results satisfactory, and said, “it was as if I had made banana bread.”

Similarly, Julie Lin ’21 tried out a recipe that she got from TikTok, which only required a few ingredients. When school was open, Lin had wanted to bake again, but she did have enough time due to her heavily packed academic and extracurricular schedule. While in quarantine, she has found it easier to make time during the day to make sweets. One day, she stumbled upon an egg custard recipe and decided to give it a try.

“After having so much fun making the egg custards, I want to try making some cookies this weekend,” Lin said. It’s important to keep positive during these times, and making treats can certainly sweeten the quarantine blues away.

“It would be awesome for others to share their recipes!” Tyler Pelayo ’20

For those of you who wish to try Julie Lin’s Egg Custard recipe, here it is.

Pour the beaten eggs, sugar, and milk into a mixing bowl
Mix well
Sift the mixture and pour the mixture to two separate mini bowls
Wrap the bowls with plastic foil
Put bowls into pot, filling water up to ⅔ of the bowl
Turn on medium heat and steam for 15 minutes
After 15 minutes, carefully take the bowls out and cool them in fridge for 5 minutes
Remove foil and enjoy! The egg custard recipe can also be enjoyed with a thin layer of condensed milk or maple syrup on top.

Servings: 2
“It would be awesome for others to share their recipes!” Tyler Pelayo ’20