The Science Survey • May 9, 2020 • https://thesciencesurvey.com/arts-entertainment/2020/05/09/feminists-housewives-and-the-equal-rights-amendment-a-review-of-mrs-america/

Feminists, Housewives, and the Equal Rights Amendment: A Review of ‘Mrs. America’ 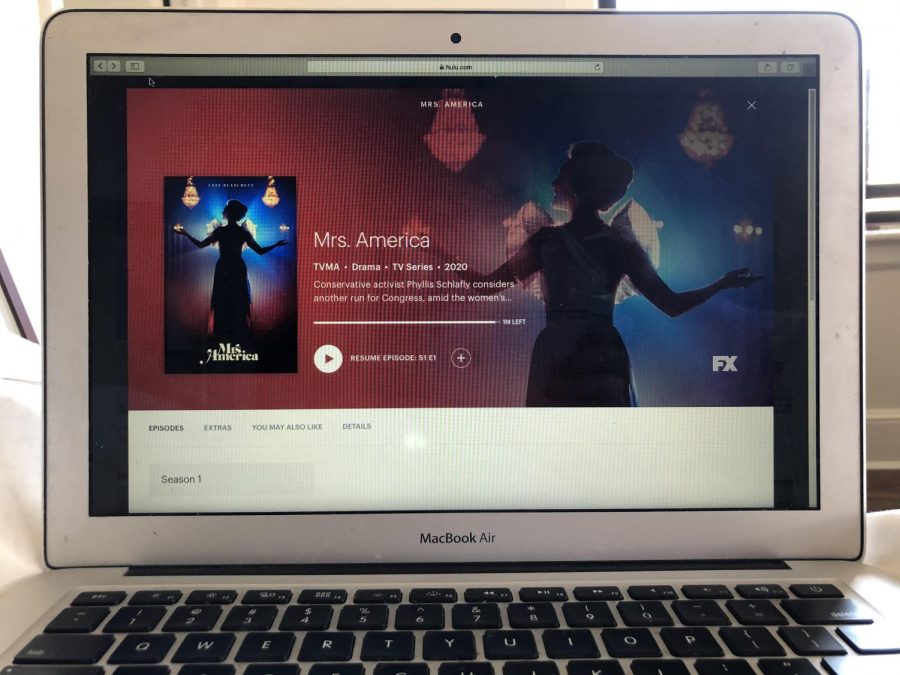 Six episodes of Mrs. America are currently available on Hulu.

Mrs. America, playing now on Hulu, depicts the campaign by the Women’s Liberation Movement during the 1970s Cold War Era to ratify the Equal Rights Amendment while showcasing the emergence of politico Phyllis Schlafly’s counter operation, STOP E.R.A. Each episode lends its title to a famous feminist, splitting its time between the tour of women lobbying for the amendment and the advocates for domestic life including Schlafly (Cate Blanchett) and her supporters. Some of the famous activists depicted in the series include Gloria Steinem (Rose Byrne), Shirley Chisholm (Uzo Aduba), and Betty Friedan (Tracy Ullman), who band together in spite of their ideological differences in hopes of getting the required 38 states needed to officially ratify the amendment.

The irony represented by Mrs. America is rooted in the life of Phyllis Schlafly, who is active in both politics and grassroots organizing but who also lobbies against a bill seeking to protect women discriminated against in the workforce, enforcing the view that a woman’s place is in the home. Though she claims that women are disadvantaged only because they do not work hard enough, subtle differences between Schlafly and her male counterparts are shown from the first episode; she is made to take notes during a meeting intended to gain support for her run for political office, and she can only run with the permission of her husband. Still further is the acknowledgement that although Schlafly’s main political focus was nuclear defense, she is pushed into women’s issues as a way to gain recognition as a female politician.

“I think that when this show takes place, and even today, there are still a lot of negative connotations surrounding feminism and how people of different genders are treated,” said Frannie Turino ’22.  “The show is interesting to watch to see how they represent the opinions of so many people [regarding feminism].”

The series is focused on the passage of the Equal Rights Amendment; however, it also expertly navigates the issues of race and LGBTQ rights which often divided the National Women’s Political Caucus at the time. The question of whether race or gender was a more important focus for a campaign for equity is highlighted in the episode focusing on Representative Chisholm’s run for president; she fears losing the black vote because, as her advisors say, she appeared more interested in feminism than race issues.

Though Mrs. America is set in the 1970s, it is still strikingly relevant today, both in our present politics and the current coronavirus pandemic. In January 2020, Virginia became the 38th state to ratify the Equal Rights Amendment, meaning it could officially be added to the Constitution in the near future. However, because Congress originally set a deadline for 1982 for ratification to occur and only 35 states had done so by then, there could be legal proceedings to decide whether its ratification is still valid.

Moreover, Schlafly’s fight against the E.R.A. signaled the beginning of the culture war between the left and right end of the political spectrum, and her emphasis on keeping together the traditional American family is a fight seen too often today. USA Today also wrote that Blanchett, who portrays Phyllis Schlafly, told reporters that the inequalities and fight over small versus big government are playing out in the government’s Covid-19 response today. She posited that the E.R.A. would have been the first step in a series of new protections that would have closed the gap on aspects of inequality such as wealth, race, and gender, demographics which are playing out in terms of who is most likely to contract the virus.

We can only guess whether a ratified E.R.A. would have led to a wave of new acts and protections, but the fight over the amendment has certainly helped shape the Republican Party, modern feminism, and American politics today.

To watch Mrs. America (subscription required), click HERE.
“I think that when this show takes place, and even today, there are still a lot of negative connotations surrounding feminism and how people of different genders are treated,” said Frannie Turino ’22.