A Critique of the Performance Group Seventeen’s Concert in Newark

Bronx Science students find the driving forces in their lives, which happens to be a group of performers known as Seventeen. 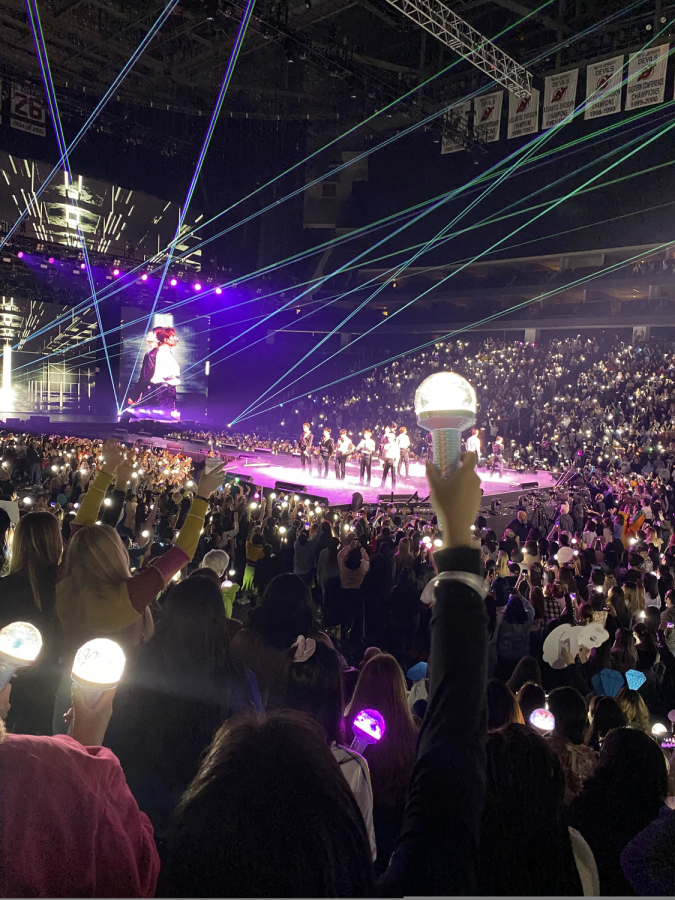 Getting the real experience of going to a concert isn’t just about seeing the artists, but about meeting the people who love them just as much as you do. “Feeling the energy of so many people who love and support the same group is one of the best feelings. Considering how large their fan base is becoming, I find the community to be comforting. Actually meeting some of these people was really amazing. During the entire concert, I was so excited, and the moment the first beat of every song dropped, I was already smiling and jumping around,” said Jacqueline Kwan ’22.

After what seemed to be the longest school week ever, the large population of Seventeen fans at Bronx Science left school on Friday, January 10th, 2020, excited for one of the best nights of their lives. Seventeen, a South-Korean group of thirteen musical performers, was holding a concert in Newark, a short train ride from New York. Newark was only one stop in their extensive ‘Ode to You’ world tour to connect with their fans, otherwise known as Carats. “The days leading up to the concert, I listened to their whole discography and watched some of their dances. I find that a lot of the time and energy you exude helps the performers, no matter who the artist is, so knowing some of the basic dances to their songs always helps hype you up,” said Jacqueline Kwan ’22. After hours of studying and doing homework late at night, the concert was a well-deserved reward for many stressed and hardworking Bronx Science students.

“The concert was dream-like, to say the least. Being able to see them on stage seemed like a dream, and there was nothing that felt anything close to what being at their concert was like,” said Wimie Hsieh ’21. For most carats, going to the concert involved taking the train from Penn Station to Prudential Center. Immediately after getting to the venue, various banners are distributed. Sweet sayings and song lyrics such as ‘You Are the Spring to Our Smile’ are printed on the banners, which are held up during the performances. After getting through security, fans may either spend some money on merchandise, or immediately find their seats and sit down, anticipating the night in store for them.

When the lights went off and the concert began, everyone stood up. The seats did not exist in those moments. Suddenly, a figure dressed in black appeared in the center stage, music blaring in the background. His face was covered by a cloth, and he seemed to revel in the sudden roar of the crowd at the realization of his presence. It was Hoshi, the group’s resident tiger look-alike. Suddenly eleven other men seemed to almost appear out of thin air, and the concert officially began. The group’s leader, S.Coups, was absent from the concert because of health issues; their label, Pledis Entertainment, announced that he was experiencing symptoms of anxiety. Throughout the concert, the fans cheered for him the loudest when his face appeared on the screens, hoping their voices would reach him despite his being back in Korea.

“My favorite memory from the concert was during the end of the concert, when Mingyu spoke to us after all the other members finished saying their ending ments,” said Hsieh ’21. (A ‘ment’ is time allocated to allow the stars on stage speak to fans, usually to close the concert).“He requested that we put away our phones so that we could all focus on the ending of the concert together and enjoy the final moments that we had together.” At the end, when the lights darkened, everything seemed to be over, but suddenly, a song began to blast and twelve exuberant figures ran back onto the stage, screaming in excitement. They said what seemed to be their final goodbyes. However, the same song played again, several times, tricking the fans several times into believing that the concert was over. The song, called ‘Very Nice,’ is an upbeat song about being motivated to get out of bed and get through the day. Eventually, the concert did end as the credits began rolling.

As Bronx Science students, we have stress in our lives. ‘Seventeen’ works to alleviate this. “’Lean on Me’ is one of the songs that makes me most emotional,” said Amayel Ka ’22. “Each rapper is trying to provide a sense of comfort to the listener and help them realize that they will always be there for you, which I believe is a really sweet sentiment.”