The Story Behind the New Year’s Song, ‘Auld Lang Syne’ 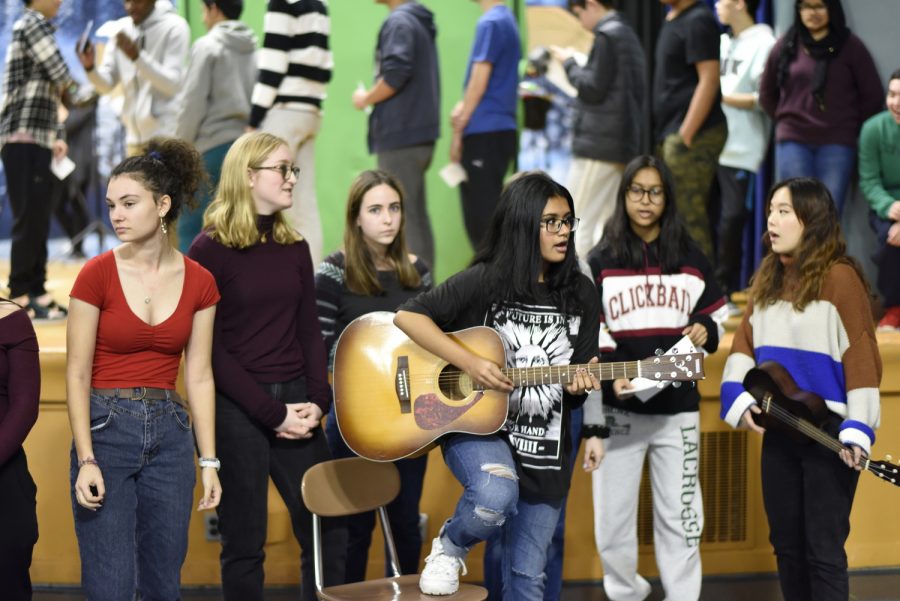 Students in chorus sing Auld Lang Syne during visits to classrooms before the Winter Break.

Every New Year’s Eve the words, “should old acquaintances be forgotten… for auld lang syne my dear,” ring out. The song, ‘Auld Lang Syne,’ is a tradition in English speaking countries. “On New Year’s, I celebrate with my family and some relatives; we eat dinner then watch the ball drop on TV and listen to ‘Auld Lang Syne’ while the adults have some drinks,” said Jennifer Lee ’22. The traditional time to hear the song is on TV when the ball drops in Times Square. “I hear it two to three times a year, always in December or on New Year’s, but I feel like most people don’t even know what the name of the song is, they just know what it sounds like. It’s probably because all the words sound like gibberish,” said Aissata Barry ’22. The song is dubbed the most well-known unknown song for a reason.

‘Auld Lang Syne’ is a quintessential New Year’s song that is sung all around the world after the ball drops. Yet no one knows the lyrics or the meaning of the song. With lyrics like, “We twa hae run about the braes, and pu’d the gowans fine,” it’s not surprising that English speakers can’t understand it.  “Auld Lang Syne” directly translates to “Old Long Since,” but has the same meaning as “for old times sake.” The reason why the lyrics of ‘Auld Lang Syne’ are so incomprehensible is that the lyrics are in Scots, a minor language spoken in Scotland. ‘Auld Lang Syne’ was originally a Scottish folk poem and was only written down in 1788 by poet Robert Burns after he heard an old man singing it. However, the poem didn’t gain such widespread popularity until 1928, when Guy Lombardo and his band sang it on the radio. “I never questioned why we sing the song. I just assumed that it was a custom,” said Lee.

The New Year is a very big deal in certain countries. In Scotland, New Year is known as Hogmanay, which is a more traditional holiday than Christmas for Scots. At one point, Christmas was banned in Scotland. The popularity of New Year in Scotland meant many of its traditions caught on elsewhere. It just happens that ‘Auld Lang Syne’ is one of them. But it was only after 1928 that the song did catch on. Guy Lombardo hosted a radio and television show every year on December 31, and it was his annual broadcasting of ‘Auld Lang Syne’ that turned it into the tradition it is. Since then, we’ve played been playing his version on the radio and the television every holiday season since. The song has been covered so many times (by artists such as Elvis Presley and Mariah Carey) that the lyrics have been altered by each individual artist.  In addition, many also alter the tune of the song.

The original poem penned by Burns is rarely heard because no one can understand it. Instead, every year we hear either Lombardo’s or someone else’s version. The original tune is also lost to history, and we can only speculate the true melody based on documents alluding to the song. Regardless of the fact that  the lyrics and tune might be slightly different, the sentiment of the song remains. The song is about the hopes of maintaining old friendships and reminiscing about the good old days. “The tune gives me a tranquil and calming mood when I hear it around the holidays. It makes me feel a bit nostalgic,” said Samgar Aidarhanov ’22. ‘Auld Lang Syne’ is not only a tradition on New Years but it’s also a fitting way to bid farewell to the year gone by.
“I hear it two to three times a year, always in December or on New Year’s, but I feel like most people don’t even know what the name of the song is, they just know what it sounds like. It’s probably because all the words sound like gibberish,” said Aissata Barry ’22.