The Hotel of Doom

A product of the Cold War is standing in North Korea today. 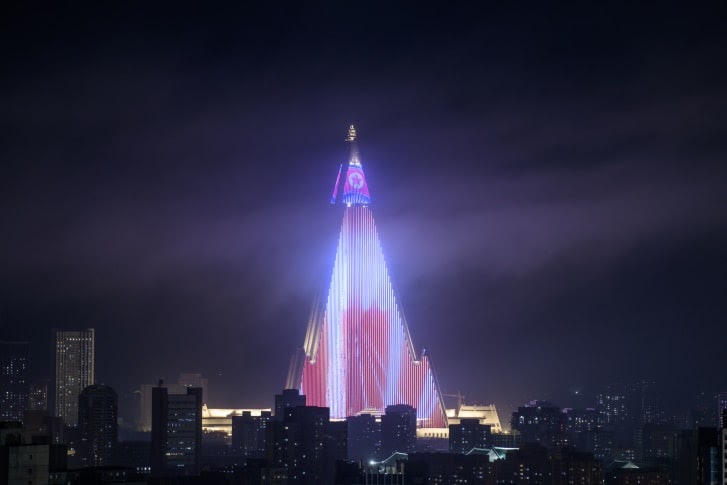 With the LED lights being installed, the Ryugyong Hotel is used as a propaganda machine.

Standing at an impressive height of 1,083 feet, the Ryugyong Hotel is one of the first things seen when entering North Korea. The hotel is in the shape of a mountain, which symbolizes the birthplace of  Kim Jong Il, the father of current dictator Kim Jong Un, who states that he was born in a secret military camp on Mount Paektu, the tallest mountain in the Korean peninsula (many believe Kim Jong Il was actually born in Russia). Due to its glass windows and spectacular light shows, which are done on the surface of the neo-futuristic building, many are not aware that the building is in fact, empty. Initially, it was planned to house at least 3,000 rooms, as well as five revolving restaurants with panoramic views. This grand construction was supposed to be completed in a mere two years, but was never completed. Contrary to its grand appearance, today it is commonly referred to as the Hotel of Doom

How did a beautiful building like the Ryugyong earn the name, ‘The Hotel of Doom’?

During the Cold War, the Soviet Union supported North Korea while the United States backed up South Korea. A year before the construction of the world’s tallest unoccupied building today, a firm in South Korea built what was then the tallest building in the peninsula, the Westin Stamford in Singapore. On top of this, South Korea also held the 1988 Summer Olympics in Seoul. As a response, the Soviet Union and North Korea took action. They organized the 1989 World Festival of Youth and Students, a socialist version of the Olympics, and planned to build the Ryugyong Hotel in time for the event. However, the plan failed due to engineering problems and economic strains. On top of this, the Soviet Union collapsed during this time, hindering all progression. As a result, the construction of the Ryugyong Hotel stopped in 1992 with only the external structure completed and a crane abandoned at the top.

The economic constraints also caused the hotel to be constructed from concrete rather than steel. This is a problem because it would take a lot of time to modify the services and ventilation systems in this 1980s construction, compared to the time that it would have taken with a steel structure. Unexpectedly, after nearly two decades, the crane on top was removed and construction commenced again. In 2008, North Korea created a contract with Orascom, an Egyptian conglomerate, to build North Korea’s 3G network. Glass and metal panels were installed contributing to the Ryugyong Hotel’s refined, shiny appearance. Construction was finished in 2011 and news of the hotel’s opening was anticipated, but never came.

Seven years later, construction began again and LED lights were installed, which prompted the building to hold a light show. However, it had a bigger purpose, to be used as a propaganda machine. The light show depicts North Korea’s history, a variety of political slogans, and the cone at the top shows a huge North Korean flag. Mr. Jones, a professional photographer who has watched this show states, “Though I was interested by the thought that this new lease of life, for all it stands for, changed nothing – in the sense that detractors of North Korea will see it as a metaphor for the regime: a vast Potemkin monument shiny and impressive on the outside, but decaying, unsafe and essentially a vanity project held together with substandard materials on the inside.” Additionally, a sign that states “The Ryugyong Hotel” in Korean and English was was added to the building in June 2018. Yet, the question remains: “Is it ever going to open?”
How did a beautiful building like the Ryugyong earn the name, ‘The Hotel of Doom’?