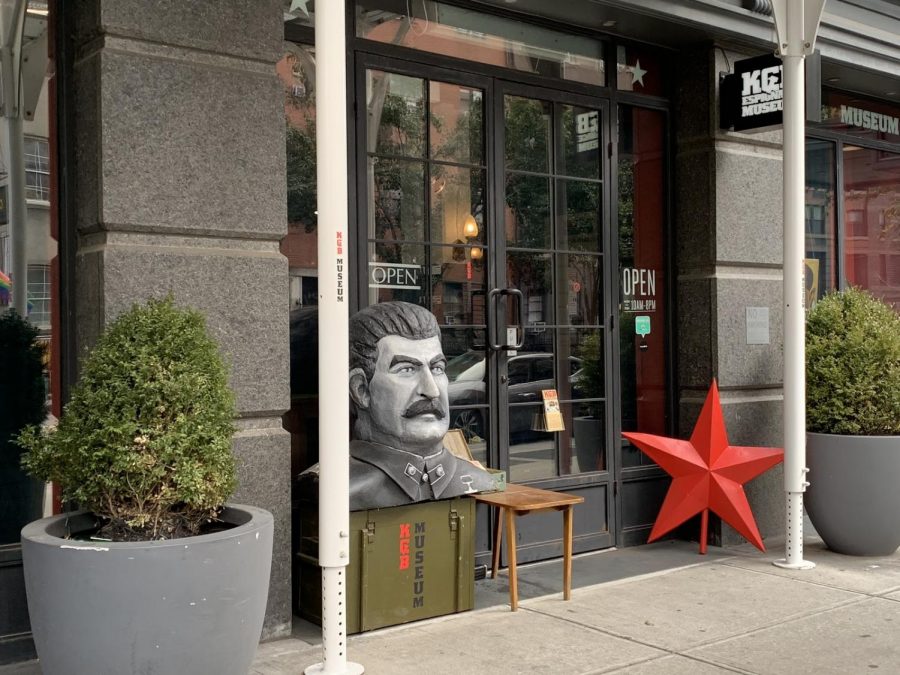 The KGB Espionage Museum contains a vast number of communist artifacts and objects. “The decorations were numerous and I felt that they really helped enhance the mood of the museum,” said Junseo Lee ’20.

An eerily pasty mannequin is propped up at a wooden desk covered with office supplies: a lamp, an inkwell, some pens. Against the wall, a large safe. And everywhere, hammers, sickles, and the color red.

Such life-size dioramas are a major component of the recently-opened KGB Espionage Museum, located at 245 West 14th Street. As the Soviet Union’s intelligence and domestic security agency from 1954 to 1991, the KGB surveilled both its own citizens and other nations, a sort of Soviet counterpart to the CIA. The KGB Museum charts the history of this organization, focusing specifically on the adoption and adaptation of technology for espionage purposes during the Cold War.

Consequently, the museum houses a number of thrilling spy gadgets. Located prominently on a wall, next to the diorama of a KGB officer at his communist desk, is the intriguingly-named Bulgarian umbrella. The tour guide explained that, in its tip, the seemingly harmless sleek, black umbrella contains a needle, to be filled with a slow-acting poison and covertly jabbed into a target. Further along the wall were Soviet propaganda posters, including a stark and dramatic black and white poster warning farmers against the lure of religion. Located by the numerous cameras was the lipstick pistol, a tube of lipstick capable of firing a single bullet.

“It was like something straight out of a James Bond movie,” said Junseo Lee ’20. Much of the museum is dedicated to a different sort of spy gear: the camera. Cameras were a vital piece of espionage technology, but mid-20th century cameras were also large and conspicuous.

This necessitated the development of smaller, easy-to-use cameras and methods of hiding those cameras, which the museum illustrates with an overwhelming sample of cameras hidden in ties, briefcases, cigarette cases, and even other cameras. It is in this section of the museum, overflowing with old cameras, that the museum most clearly demonstrates the influence of technology on behavior and behavior on technological developments.

It is also the only part of the museum that can be said to have a clear theme. For the most part, the displays and dioramas appear to be placed randomly, although further inspection reveals some sort of chronological order.

The museum is in many ways like an antique store. It is dark, small, and crowded with objects. Glass cases, containing the artifacts, create a sort of forced, winding path, walling visitors in. They do nothing to help alleviate the museum’s cramped atmosphere.

Luckily, there are no actual crowds of people, a welcome relief from famous and consequently crowded New York City art museums such as the Metropolitan Museum of Art. Only two other people entered the museum in the approximately one and a half hours during which I was there. However, in a clear effort to attract more visitors, the museum deviates at times from its technological focus, adding in games and places for visitors to take photos. Lee said, “The mood of the place was a little confusing. There was everything from a torture chair to a ‘find the objects spy game.’ It made it seem like the little games and attractions were there to make up for the lack of interaction with the exhibits.”

Self-promotion can be annoying, but there is nothing wrong with it. The problem is that the museum also addresses torture, or, rather, mentions it and moves on. Amongst the less-technological displays are a restraining chair and the set up of a Soviet prison cell. The tour guide explained the roles of different parts of these displays, describing how the restraining chair can be highly effective despite only having cloth straps and that the spikes on the interior side of the cell door prevents prisoners from banging on it. All this information is as interesting as the spy gear, but it also hints at a darker side that is never really addressed. The museum never goes into the full extent of KGB cruelty. The main drawback of the museum was not its organization, but that it left me, at least, with a feeling that something was missing, that history was being overlooked and violence sensationalized to attract visitors and avoid so-called bias.

Despite the antique store-esque nature of the museum and its failure to appropriately address Soviet brutality, the museum does succeed in its efforts to portray the relationship between technology and espionage. The museum’s interactive components, the fascinating stories behind the artifacts, and the spectre of communism combine for an intriguing and informative experience. As Jing-Mae Wang ’20 said, “History museums are a window into the past,” and this window into Soviet spy technology is certainly worth a glance.
“It was like something straight out of a James Bond movie,” said Junseo Lee ’20.