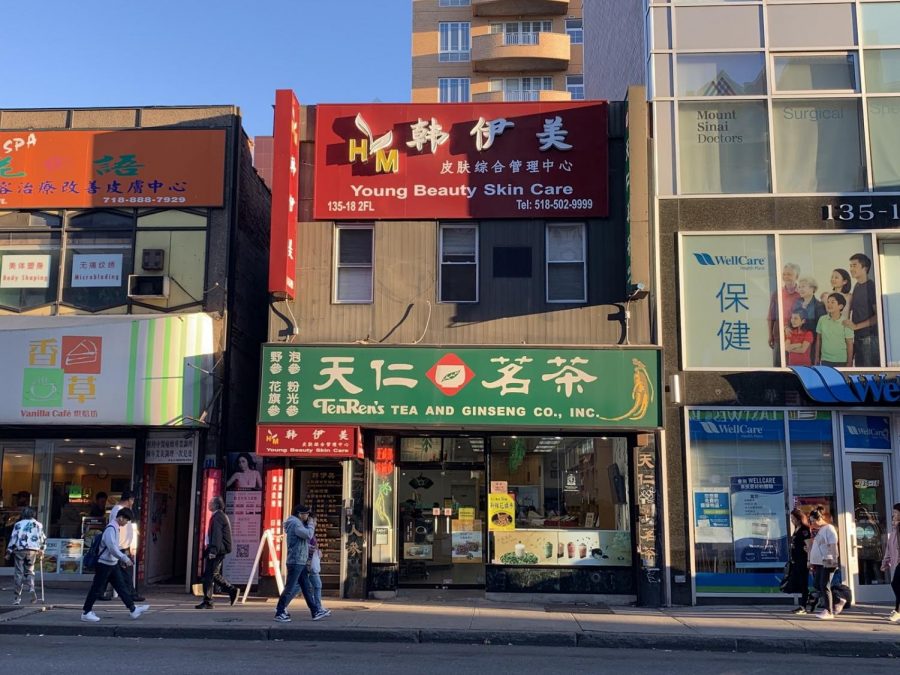 TenRen has been a mainstay in New York City for more than over a decade, providing local customers with freshly brewed teas. They were one of the first original Taiwanese tea franchises to enter the American market.

What’s the $6 drink that some Bronx Science students get more than five times a month with less ice and half sugar? According to a recent survey, that drink is bubble tea. Sweet, cold, and refreshing, bubble tea has become the go-to drink for many. Originally from Taiwan, the popularity of bubble tea is expanding beyond borders. In the United States alone, there are over a thousand bubble tea stores and growing. Most notably in New York City, Chinatown and Flushing have recently seen a surge of popular bubble tea franchises opening their first U.S. locations. These new stores are indicative of a trend towards more sophisticated and stylish drinks, but at what cost?

To first understand the changing trends in the bubble tea community, we first have to look at the introduction of bubble tea to the U.S market nearly three decades ago. In the 1980s a wave of Taiwanese immigrants brought over their language, food, and culture into the country. For many immigrant families, opening their own stores was a way to make a living in America. Through locally owned restaurants and bakeries, bubble tea culture became centralized in predominantly Asian communities. However, towards the early 2000s, the presence of bubble tea stores were shifting away from family owned businesses and towards those that are part of larger franchises, expanding beyond ethnic enclaves.

Especially in New York City, where the perception of bubble tea has changed from a powdered cheap drink to an Instagrammable dessert, the five boroughs have become a major testing ground for both homegrown and Taiwanese bubble tea brands looking to establish a global presence. Within a decade (from 2004 to 2014), brands such as Quickly’s, ViVi bubble tea, Kungfu Tea, and CoCo Tea & Fresh opened their first New York stores. However in just the past two years alone, the rate at which new bubble tea chains arrive in New York has grown drastically, with four new chain stores opening: YiFang Fruit Tea in August of 2018, Tiger Sugar in May of 2019, ChunYang Tea in August of 2019, and Tsaocaa Tea in September of 2019. In contrast to their predecessors, these four stores signal a change to the bubble tea landscape, focusing on higher quality drinks, increased prices, and an “authentic Taiwanese bubble tea” experience.

The growing options of bubble tea stores in the city has not gone unnoticed by the Bronx Science community. In a recent survey, students were asked to submit their favorite bubble tea store. First place belonged to KungFu Tea with 16% of the votes. Second place belonged to ViVi and CoCo (tied at 12%). Gongcha came in at third place with 10% of the votes. Even newer stores such as Tiger Sugar and ChunYang Tea captured 8% and 4% of the votes respectively, with their presence gradually shaping consumer habits. While some students welcome the new stores as a refreshing change to the community, others point towards an increasingly saturated bubble tea market.

Natalie Teng 20’ shares her observations about the recent influx of higher end bubble tea chains, “Bubble tea, like any other consumer product, can most likely be produced at cheaper prices, however select stores that use high quality ingredients do require that extra price increase,” Teng said.

Teng takes careful consideration when deciding where to drink bubble tea, adding that she is willing to spend more for unique drinks. “I am willing to pay more for the specific drinks with high quality ingredients, however some flavors aren’t worth the price such as the basic boba milk tea.”

With stores such as Yifang and Tiger Sugar becoming bubble tea trendsetters, they have also influenced a wave of new “copycat” stores, leaving students with disappointing first impressions.
“A lot of these bubble tea shops claim to be authentic Taiwanese but I have a hard time believing that. The stores then open up next to each other and they lack uniqueness,” said Esther Huang ’20.

With new stores opening every month, some try to mimic the signature drinks of more “name brand” bubble tea brands to make a quick profit, often times missing the mark. The growing saturation of the bubble tea landscape in New York is represented in the statistics – of the thirteen total survey options, more than half of the bubble tea stores recorded less than 5% of votes.

Some students have even reported that their favorite “undiscovered” bubble tea stores have closed in recent years, with the ones remaining trying to survive by raising prices. Over 70% of surveyed students noticed a price increase in their drink compared to when they first began buying it. While rent and wage hikes are contributing factors, there is no doubt that newer bubble tea chains are putting a strain on smaller bubble tea businesses. As the playing field becomes more crowded, which bubble tea stores will be able to remain in the competition?

Remember to check out Joanna Zhao’s article “Tiger-Tastic or Tiger-Tragic?” on more information on how Bronx Science student’s view the hype around Tiger Sugar (One of the new bubble tea stores mentioned in this article).