Loving & Losing: A Review of Ariana Grande’s Album ‘ Thank You, Next’

Ariana Grande’s new album serves to revitalize the pop sensation whom we all know and love. 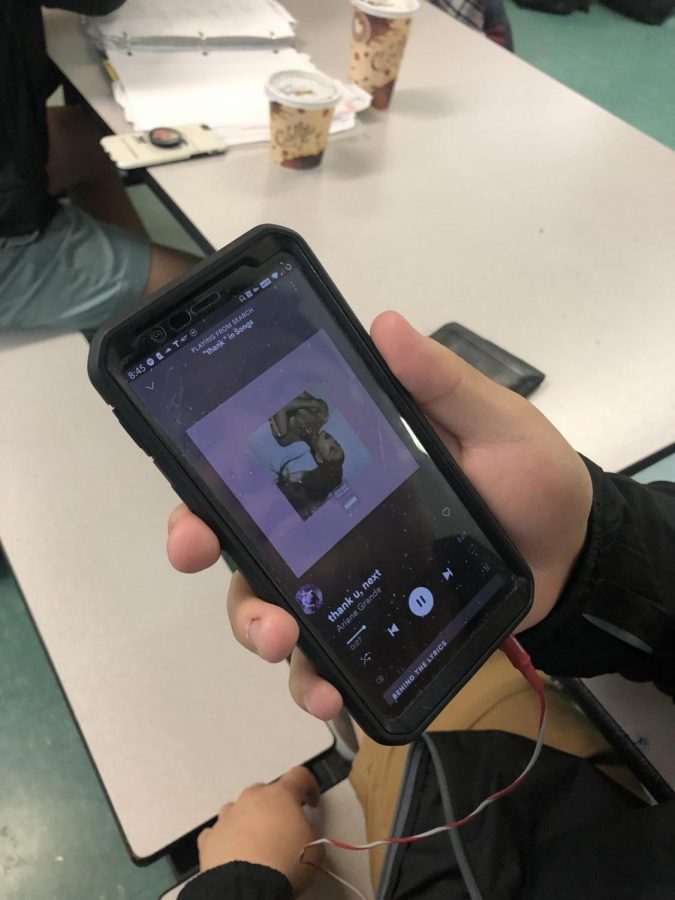 Thank U, Next, being played on Spotify.

“I’ve loved and I’ve lost. But that’s not what I see. Just look what I’ve found. Ain’t no need for searching,” Ariana Grande said.

Music plays an essential role in everyone’s life. Whether if it’s to set a mood, or to dance or to appreciate the theme of the song, we have all listened to music for one reason or another. Music affects us, but it also affects the artists who have produced the piece. They are the ones  who express their sentiments and emotions through a collection of songs, all culminating in a spectacular album.

Ariana Grande has been a huge pop sensation ever since her debut in theatre during her teenage years. Her sudden fame was due to her awe-inspiring voice. Known for her popular songs like “Side to Side” and “Dangerous Woman,” and the newly released album Thank You, Next, her music has touched our hearts with thematics of love and loss.

Thank You, Next was originally released as a single, but eventually was compiled into an album due to its massive success. It consists of twelve songs: “Imagine,” “Needy,” “NASA,” “Bloodline,” “Fake Smile,” “Bad Idea,” “Make Up,” “Ghostin,” “In My Head,” “7 Rings,” “Thank U, Next,” and “Break Up with Your Girlfriend, I’m Bored.”

Each song is unique in their own way, but are all paired with her personal problems with relationships and grievances. In Grande’s 2017 World Tour, she was met with a tragic incident during her show in Manchester, where a terrorist bombing killed 22 people and injured 139.

Even after a year-long hiatus, she managed to make a huge come back with a new resolve. The spontaneous popularity of the original single “Thank U, Next” seemed to spark the inspiration for her; only written in a week, and recorded in a couple more, the hit single sets up the foundation of a widely anticipated album.

However, many people look past Ariana’s personal stories. This past year has certainly been long and difficult for her. First, she broke up with Mac Miller, whom she had dated since 2016. Following that, she got engaged with Pete Davidson, but that was shortly greeted with a breakup, as she was grieving Mac Miller’s death. This album was Ariana’s attempt to revitalize and express herself through her lyrics.

Although the recurring theme of each song is  a romantic  relationship, there is also an emphasis on reflecting on the current world of millennial and self-affirmation. A lot of the songs phrase her relationship problems in a way that many teens can relate to. For example, in the song “Bloodline,” Grande sings, “Because I’m trying to do the best I can. And they can’t find something to satisfy me, ugh.”

Her song focuses on self-love, and implies you should rely on only yourself for you own happiness.
These messages also prove to be very meaningful for the general public, and that is no exception towards the student population of Bronx Science. Ariana’s soothing voice and deep themes manage to grasp the attentions of many students. ““I enjoy Ariana Grande’s latest music better than her old music because she’s been changing her style recently. Her style used to be more pop, but now she’s starting to explore R&B and hip-hop,” Paige Linzo ’20 said. “I like to listen to her music, because she’s a talented vocalist and her tunes are catchy.”

Debuting at Number 1 on Billboard 200 chart, and selling over 116,000 albums, there is no doubt that “Thank You, Next” is a huge success. Although it was written and recorded within weeks, Ariana’s powerful voice reached out to the hearts of millions of avid music listeners. This was definitely a comeback from a traumatic event, and as she climbs back onto her feet, the future of pop music is looking bright.